James Marsh
Editor, Asia; Hong Kong, China (@Marshy00)
Tweet Post Submit
And that's the end of that chapter. 2014 is running on fumes and all eyes are already looking to awards season and the behemoths of next year that threaten to decimate the box office. The Avengers: Age of Ultron, Star Wars: The Force Awakens, Pixar's Inside Out and James Bond's latest, Spectre, are primed to take all our money in 2015. In between these pillars of popcorn entertainment, ScreenAnarchy's global team of critics and contributors will again be slaving away to dig up the juicy little gems from around the world, which may struggle to compete commercially, but which win the battle time and again as the most interesting achievements in the global arena of cinema.
This year, no fewer than 33 contributors submitted lists of their Top 10 films of 2014, and 142 films featured in this year's poll. A complete list of all those films can be found at the end of our countdown, but just to give you some idea of what our team has been watching, here is what fell just short of bagging a Top 10 slot, and placed 11 to 20:
11. Guardians of the Galaxy (dir. James Gunn, USA)
12. Why Don't You Play in Hell? (dir. Sono Sion, Japan)
13. Tokyo Tribe (dir. Sono Sion, Japan)
14. Birdman (dir. Alejandro Gonzalez Inarritu, USA)
15. The Babadook (dir. Jennifer Kent, Australia)
16. Gone Girl (dir. David Fincher, USA)
17. The Lego Movie (dir. Phil Lord/Christopher Miller, USA)
18. The Tale of the Princess Kaguya (dir. Takahata Isao, Japan)
19. The Tribe (dir. Miroslav Slaboshpitsky, Ukraine)
20. The Wolf of Wall Street (dir. Martin Scorsese, USA)
In any other year that list, including Scorsese, Fincher, Inarritu, Sono and Takahata, would make an incredibly robust Top 10 itself. However, Team ScreenAnarchy has deemed 10 other films as being even greater and more worthy of praise and plaudits than these. And so, without further ado, here is ScreenAnarchy's 10 best films of 2014: 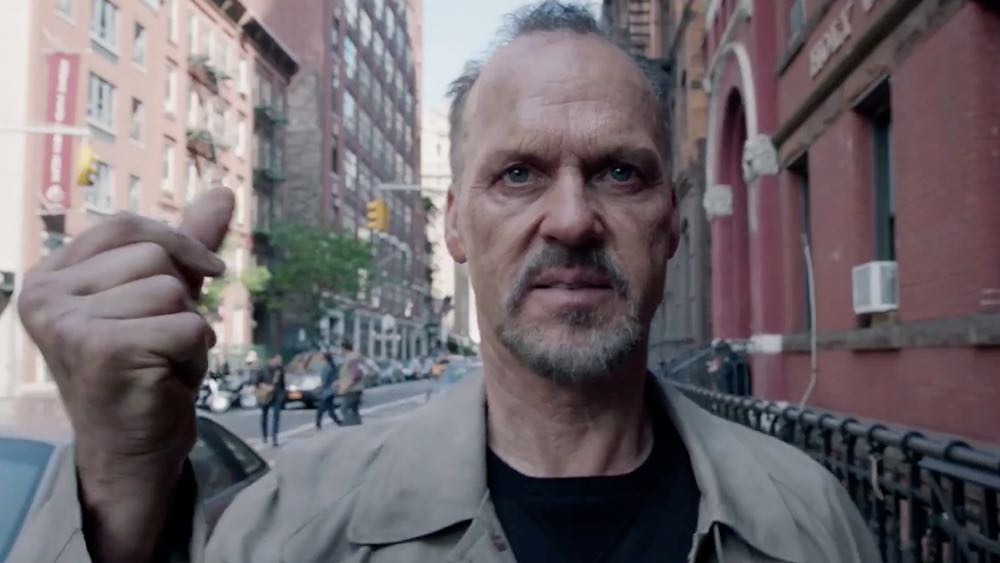 Why the Birdman image you ask? Well, despite the film only coming in 14th in our official poll it just so happened to be my favourite film of 2014, and I'll be flying the flags of Team Keaton and Team Norton all the way to the Oscars. 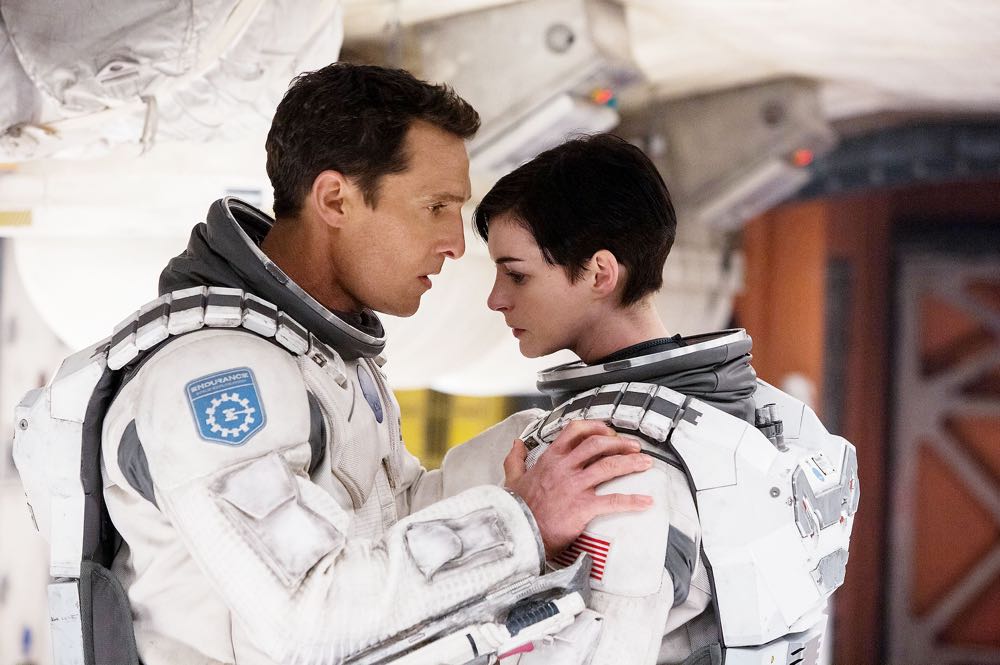 Interstellar has its flaws, but they are few, and arguably the idiosyncrasies of Nolan’s directorial eye (a heavy-handedness with emotion, for instance). In most every other element of film-making this work soars among the stars of 2014: the acting on all fronts is top drawer, including the welcome hilarity (and ingenious design) of TARS; the physics on display, and the effects used to express them, are revelatory to both audiences and researchers (two academic publications resulted from this work); the score skyrockets, and gravity waves of bass transcend sound altogether. Above all, however, it was the manifest inextricability of love and physics that left audiences compelled by the undeniable power of both, and by the film’s expression of something even grander than their sum. 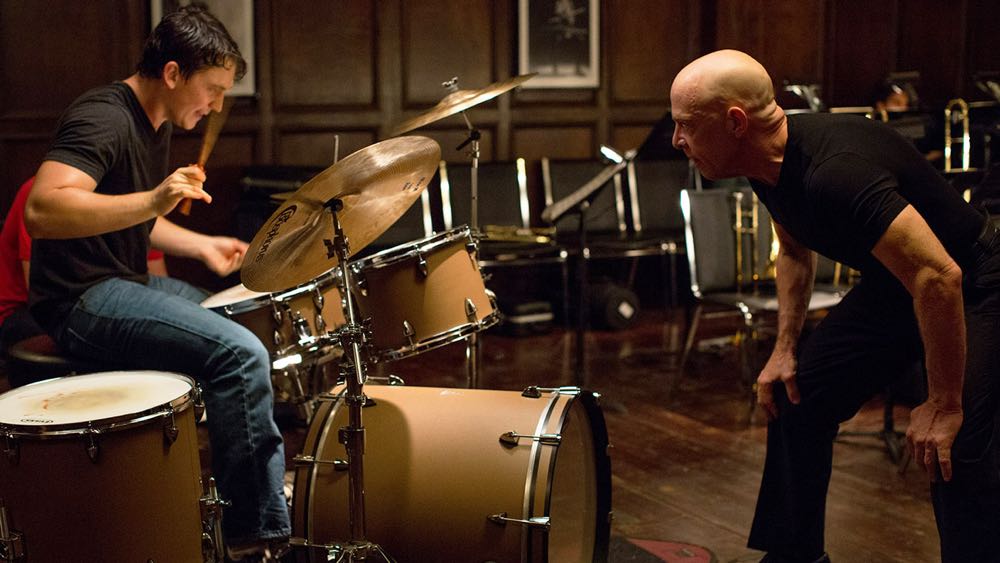 Writer/director Damien Chazelle creates a percussion-soaked environment in which young drummer Miles Teller is driven to succeed, to become, not just good, but one of the best. He faces stiff opposition in the person of J.K. Simmons, a rigid, rigorous, ramrod-straight teacher and conductor who demands perfection. Simmons gives an electrifying performance, and the movie snaps and pops in every measure. 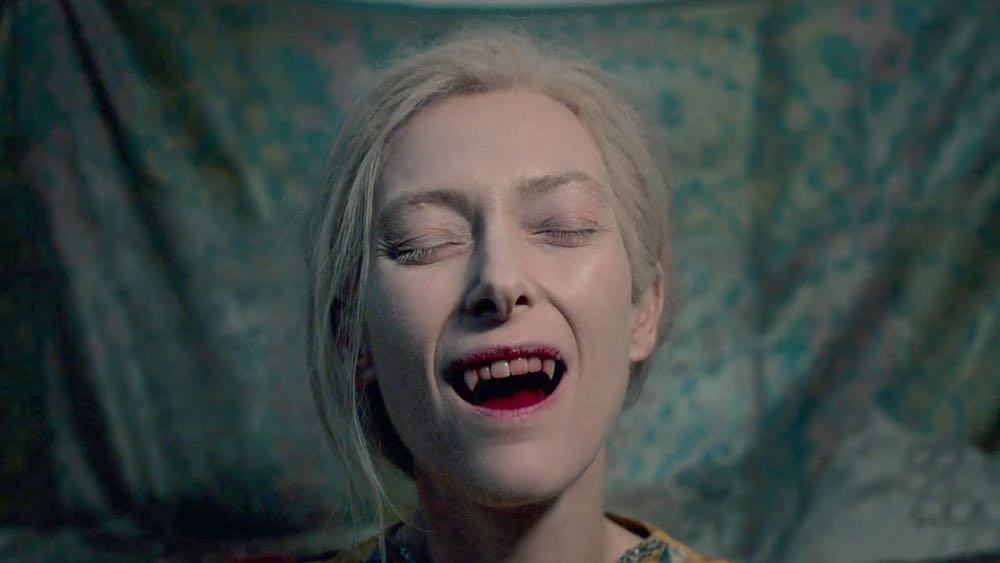 Jim Jarmusch’s elegiac tale of rock and roll, suicide, science, literature and life is the best vampire movie to come along in ages. Tilda Swinton and Tom Hiddleston play tragically hip bloodsuckers who have soaked up so much culture over the centuries that they have become the ultimate connoisseurs. Old Detroit is the ultimate location for the 21st century vampire to hang loose in a haze of fuzz guitar and type O negative popsicles made from the local plasma. In no hurry to get anywhere, Only Lovers Left Alive best represents what extreme longevity might feel like, and it is sublimely melancholic. 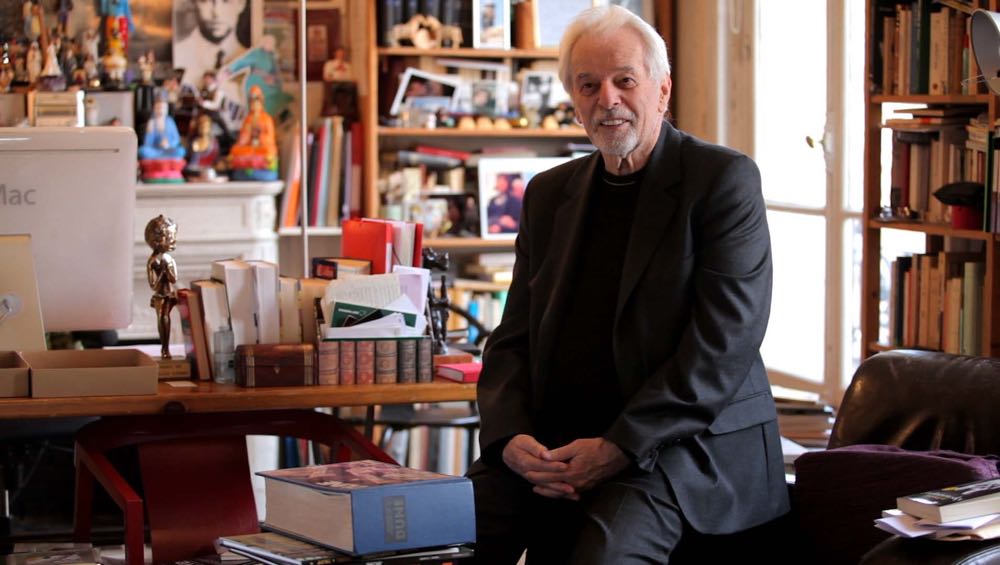 Alejandro Jodorowsky’s failed attempt to bring the science fiction novel Dune to the big screen in 1975 makes for a truly incredible and moving documentary. Even if the Chilean director must recall the painful experience of not fulfilling a dream due to Hollywood’s lack of vision, there’s a lot of joy to share when talking about the time he shared with such legends as Dali, Orson Welles and Pink Floyd (not to mention the team of artists he brought together). Jodorowsky’s unique way of seeing Dune is perfectly displayed and, equally important, why this vision is still so relevant to cinema. 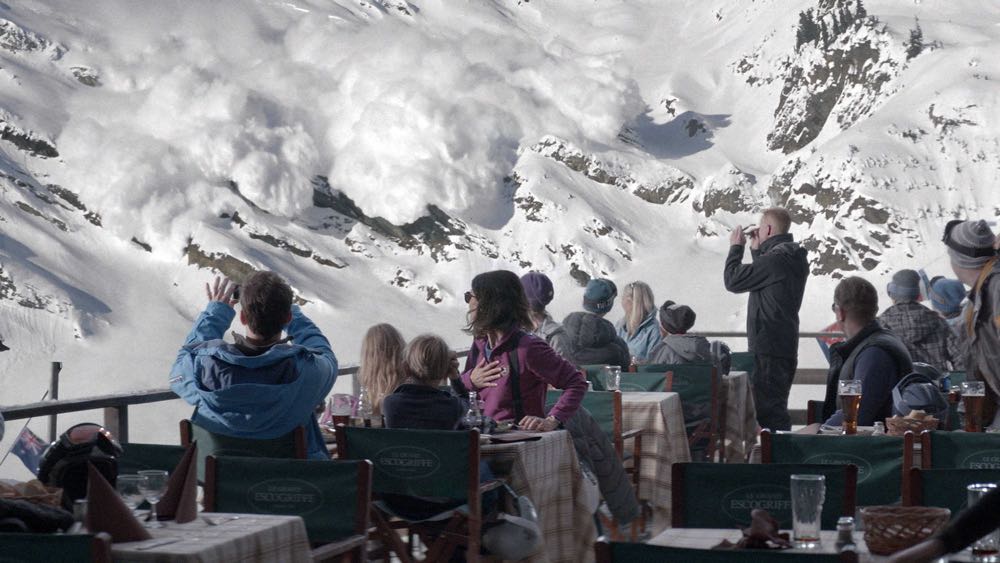 Force Majeure is tightly scripted, exquisite filmmaking, which sets its scene within the first ten minutes before flipping the switch and introducing a situation that will be almost surgically deconstructed for the remaining run time. A happy family holiday in the French Alps is interrupted when the father commits a cowardly act; he deserts his cowering family at the sight of an approaching avalanche. It leaves the mother questioning her husband, the father questioning himself and the children confused. Sounds dark? While the situation is explored in detail and characters are deftly portrayed what's surprising is the humor that runs throughout. Force Majeure is hilarious, containing some of the most brilliantly funny, and excruciatingly awkward, scenes of any film this year. Director Ruben Östlund exerts masterful control over the situations in which he puts his players and the cast, headed by father Johannes Kuhnke, mother Lisa Loven Kongsli and brilliantly awkward friend Kristofer Hivju do exceptional work in their respective roles. 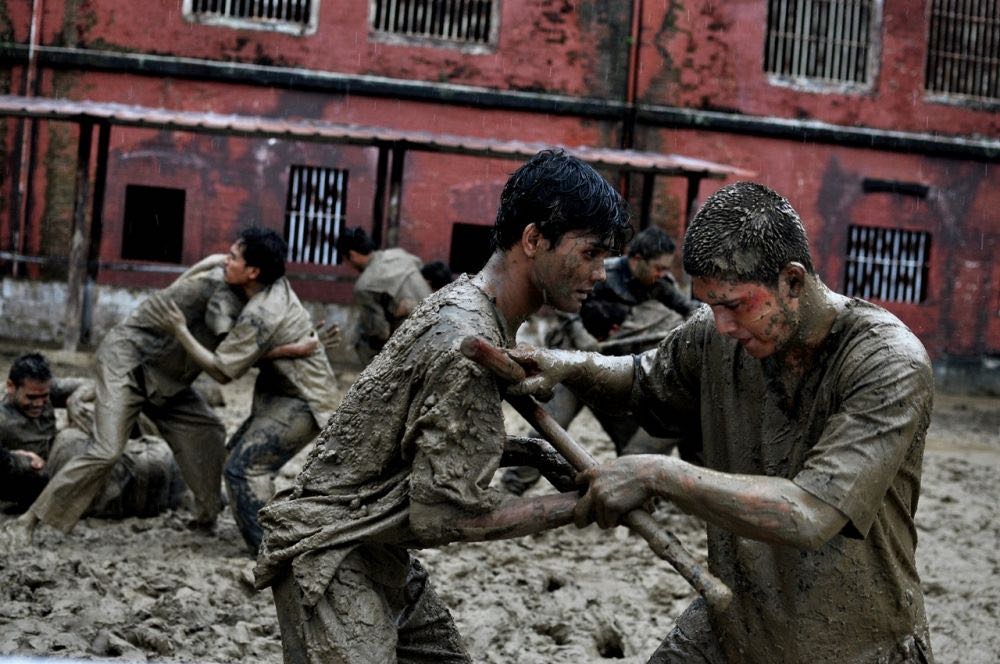 The Raid 2 set a new high point for violent action cinema. The sequel vastly expands on the world of the original and shows off far more of the ambition of gifted filmmaker Gareth Evans. He combines sublime choreography with superb camerawork, throwing the audience into the middle of the mayhem, where we feel every punch, kick, stab, gunshot and car crash. There's a carefully calculated rhythm to the action scenes that maximises their impact and makes them dizzyingly gratifying for hardcore fans of the genre. That they're tied together with an engaging, classic mobster tale in which every character is surprisingly meaningful, helps make this one of the greatest films of the year. 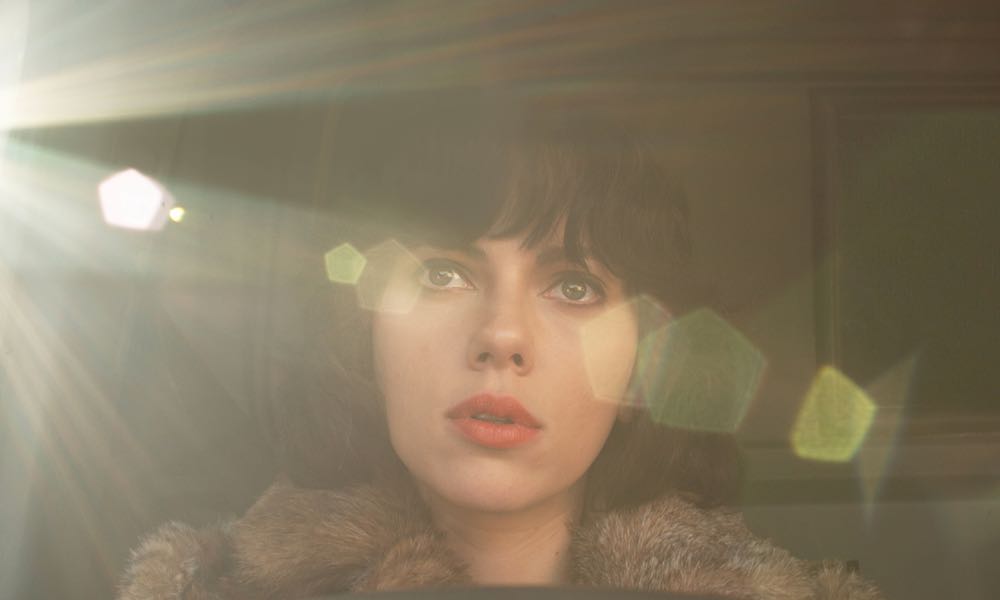 Starring Scarlett Johansson as an alien manhunter in Scotland, opinions on Jonathan Glazer’s third feature reign from outstanding to flabbergasting. Upon the film’s release last spring audiences were presented with what could be summed up as Tabula Rasa Cinema. Is the film minimalist Science Fiction? A kitchen sink social experiment with non-actors? Is it a sly gender study, or painful allegory on objectification and misogyny? The challenge and attraction of Under The Skin lies within all these interpretations and beyond. Whether through Mica Levi’s otherworldly score, or Johansson at her most blank and alluring, it is the film’s relentless opacity which makes it an experience to be seen rather than a work to be intellectualized. And In an age of oversaturated thought, such pure alien beauty is greatly needed. 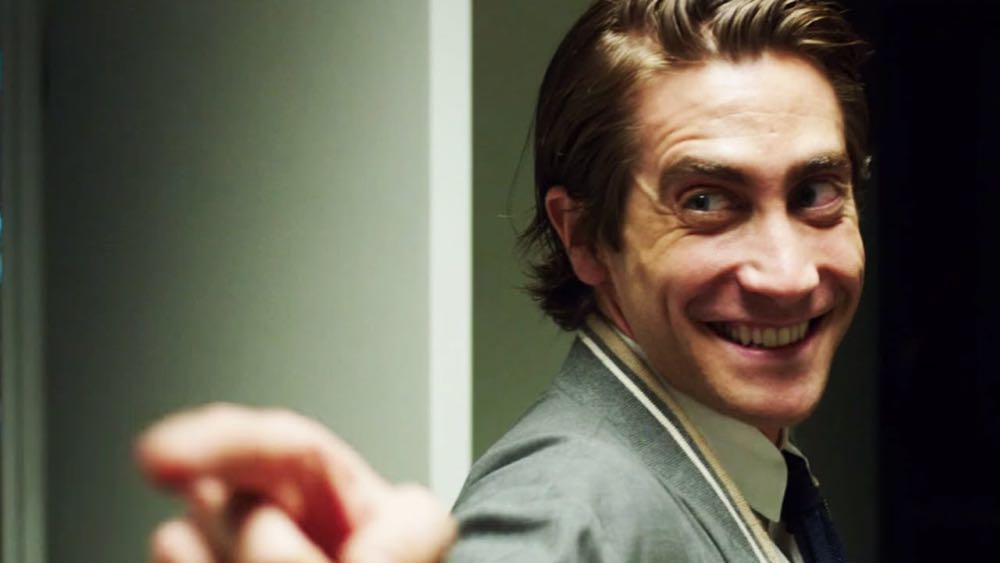 There’s so much to love about Dan Gilroy’s slick tale of sleazy ambition, Nightcrawler. At the forefront is Jake Gyllenhaal, who deeply sinks his teeth into anti-hero, Louis Bloom, the wide-eyed entrepreneur with the firm belief that success is available to those who are willing to put in hard work. Gyllenhaal is simultaneously hilarious and frightening as Bloom, propelling Gilroy’s ingeniously dark farce into a cult marvel that promises to live on as the type of film one discovers and adores. It also features the welcome resurgence of Rene Russo, who feels right at home in this out-of-time thriller. Nightcrawler is funny, brilliantly acted, offbeat, and then suddenly it becomes the most exciting film you’ve seen in years. 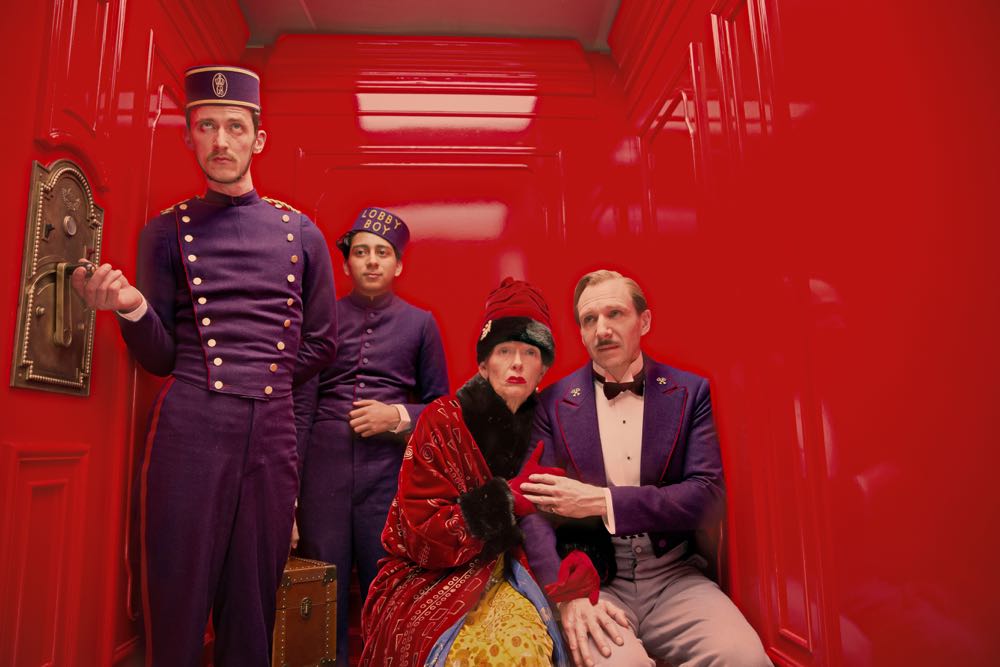 Some have criticized Wes Anderson for relying on a very repetitive formula in his works, but when the results are as delightful and boundlessly creative as The Grand Budapest Hotel, who’s to complain? Featuring an enormous cast (including a wonderful lead in Ralph Fiennes) and jumping from daring prison escapes to chase sequences in a heartbeat, Anderson’s latest is a breathless pleasure. His formal style has never been so meticulous and he marries it here with the grandness of early 20th century Europe, yet never loses sight of a story which is filled with adventure and heart. 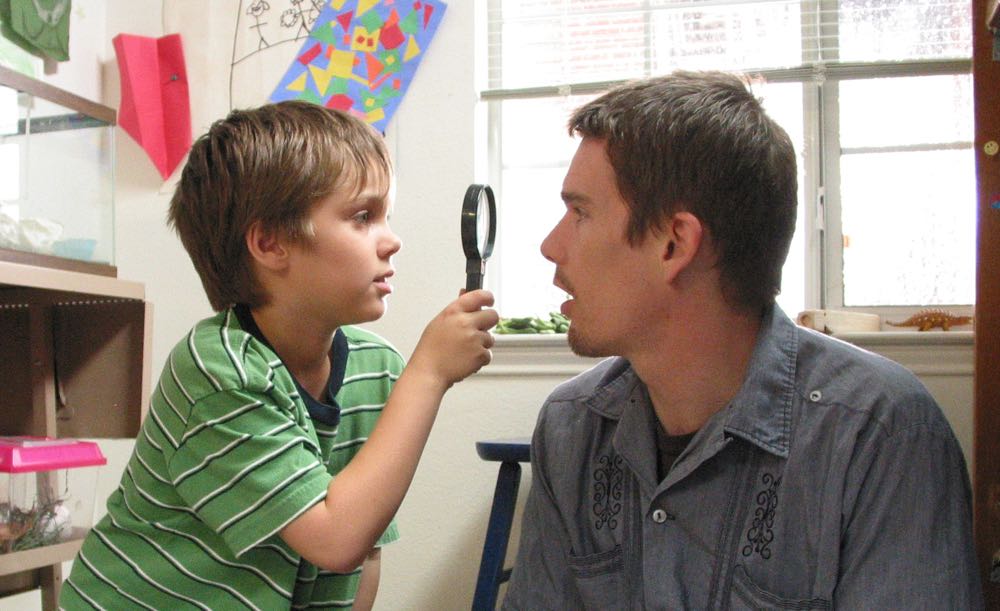 Humbly precise, Richard Linklater's Boyhood might just be his masterpiece. It evidences an unprecedented go-for-the-gusto 12-year shoot, the unwavering commitment of all involved (special notice to Patricia Arquette, who secretly owns this movie), and an expertly sustained tone and vibe in the course of that most risky production schedule. The film is full of deeply moving small moments. (Just you try not to well up when young Mason is asked to paint over the height markers on the door frame!) In simply observing a boy grow up as his family changes, Boyhood is never not thoroughly engaging, or relatable. 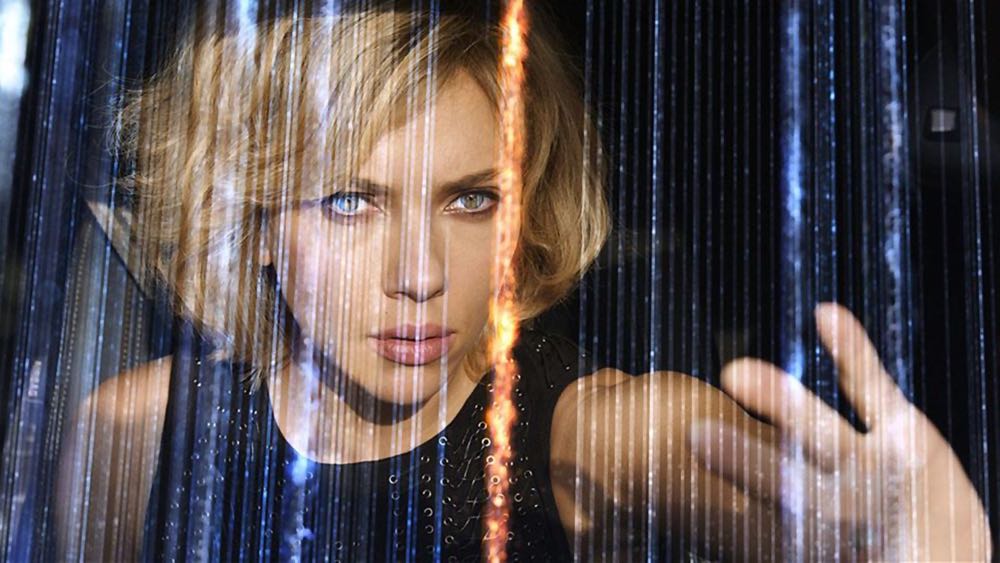 Here's the full list of 142 films that featured on our contributors' ballots:
(Disclaimer: Luc Besson's Lucy didn't get a single vote - I just like this image of Scarlett sorting through stuff)

71
1001 Grams
12 Years a Slave
20,000 Days on Earth
22 Jump Street
52 Tuesdays
A Girl at my Door
A Most Violent Year
A Most Wanted Man
A Touch of Sin
Aberdeen
Alleluia
American Sniper
Birdman
Black Coal, Thin Ice
Blind
Blue Ruin
Boyhood
Calvary
Captain America: The Winter Soldier
Casa Grande
Chef
Citizenfour
Climbing to Spring
Cold in July
Danger 5
Dawn of the Planet of the Apes
Der Samurai
Duke of Burgundy
Edge of Tomorrow
Electric Boogaloo
Enemy
Fandry
Force Majeure
Frank
Free Fall
From What is Before
Giovanni's Island
Gone Girl
Goodbye to Language
Guardians of the Galaxy
Haemoo
Han Gong-ju
Hard to be a God
Horse Money
Housebound
Ida
Inherent Vice
Interstellar
It Follows
Jauja
Jigarthanda
Jodorowsky's Dune
John Wick
Killers
Lady Maiko
Les Combattants
Leviathan
Li'l Quinquin
Life Itself
Like Father Like Son
Locke
Love and Terror on the Howling Plains of Nowhere
Magical Girl
Maidan
Man From Reno
Melbourne
Memphis
Mommy
National Gallery
New World
Nightcrawler
Norte, The End of History
Nymphomaniac
Of Good Report
Only Lovers Left Alive
Over Your Dead Body
Pale Moon
Peaky Blinders
Pride
R100
Red Army
Seven Weeks
Sils Maria
Snowpiercer
Song of the Sea
Sorrow and Joy
Spring
Stand By Me Doraemon
Starred Up
Starry Eyes
Stray Dogs
Texas Chain Saw Massacre
The Act of Killing
The Babadook
The Dam Keeper
The Double
The Editor
The Grand Budapest Hotel
The Great Beauty
The Great Passage
The Guest
The Hobbit
The Internet's Own Boy
The Kingdom of Dreams and Madness
The Lego Movie
The Missing Picture
The One I Love
The Overnighters
The Penguins of Madagascar
The Raid 2
The Sacrament
The Second Game
The Secret Life of Walter Mitty
The Snow White Murder Case
The Tale of the Princess Kaguya
The Terror Live
The Tribe
The Wind Rises
The Wolf of Wall Street
The Wonders
The World of Kanako
These Final Hours
They Came Together
Tokyo Tribe
Tusk
Two Days, One Night
Under the Skin
Wadjda
We Are The Best!
Wetlands
What We Do In The Shadows
When Animals Dream
When Marnie Was There
Whiplash
Whitey
Why Don't You Play in Hell?
Wild
Wild Tales
Wood Job!
X-Men: Days of Future Past
Young Detective Dee

Do you feel this content is inappropriate or infringes upon your rights? Click here to report it, or see our DMCA policy.
Best of 2014BoyhoodForce MajeureInterstellarJodorowsky's DuneNightcrawlerOnly Lovers Left AliveThe Grand Budapest HotelThe Raid 2Top 10Under The SkinWhiplash