Why mess with tradition? And the disc is as masterfully directed as the film itself. 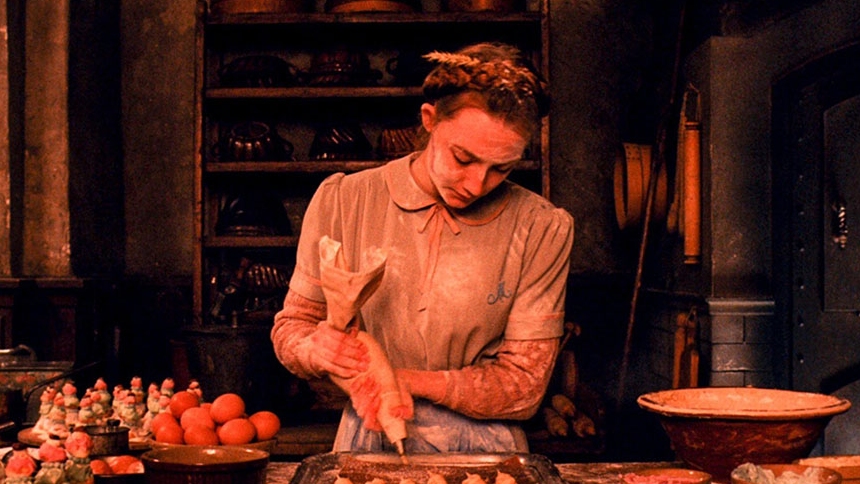 During this particular week in Coronavirus self-isolation, I found myself re-reading D.M. Thomas' The White Hotel and ambling through the film and special features on the Criterion Collection's new release of The Grand Budapest Hotel.

The two knocked together as only accidentally sublime pairings can: twin tales of memories that might be dreams that might be the whispering dread of the rise of fascism a hundred years ago, all while I lay on my couch in the middle of World War C. Unnerving, and delightful, in equal measure. I'm 47 days into this thing. Can you tell?

Our original review of Grand Budapest was published just over six years ago. The film continuously improves upon rewatch, which would be enough to recommend this Blu-ray to most fans. This week was my third time through, and as outlined in Matt Zoller Seitz's video essay included on the disc, with rewatches, the whimsy tends to fall away, revealing the sadness and sense of loss beneath.

The Criterion disc, spine #1025 and the eighth of Anderson's to be included in the Collection, is also a peerless presentation and exploration of the film, unfolding in geometric layers like the box for one of the Zubrowkan baker Mendl's cakes.

The special features begin with a newly-recorded commentary, featuring Anderson along with friend and filmmaker Roman Coppola; critic Kent Jones; and Jeff Goldblum, who turns up briefly as Deputy Kovacs in the middle of the movie, but here records through the whole thing, confessing at the outset that he's not entirely sure why they're all there.

It's a high-spirited affair with Anderson leading the others, though, of course, there are gaps and rambles as the team (recording from opposite coasts) picks up whatever threads occur to them and run with them for as long as they like. (It never ceases to baffle me that commentaries are not, at least partially, planned in advance.)

For me, the most engaging featurette on the disc falls into the first section of the video supplements, which is called "Visiting the Grand Budapest." It's a half-hour look at the film's design and special effects with Jeremy Dawson (credited as producer but also clearly a fairly hands-on effects producer) and Adam Stockhausen (the production designer).

It's the sort of special feature that will make young filmmakers want to make films, and it essays the fundamental problem of any production -- how to turn each individual building block of the story into a filmmable element, by any means necessary -- in charming, almost inspirational terms. Particularly amazing is the transformation of a defunct shopping mall -- found in a small town in Germany -- into the various historical stages of the Grand Budapest lobby, and the fact that nearly all the rest of the "sets" were adapted from nearby locations using, at times, astonishingly flimsy screen tricks. And yet it all works.

The video does all this and also picks apart some aspects of Wes Anderson's overall approach to mounting a film in instructive ways, without getting as rigorously technical (or broadly high-conceptual) as some of the other features.

This is more the province of the two video essays on the disc. The aforementioned Matt Zoller Seitz essay, released to coincide with Seitz's book on Wes Anderson in 2015, is more thematic, looking at how themes of loss and unarticulated need span all of Anderson's work and surface poignantly in the deceptively "light" Grand Budapest Hotel.

The second video essay, a new piece by David Bordwell, is called "Wes Anderson Takes The 4:3 Challenge" and discusses how Anderson, like many great artists, creates artificial formal constraints in order to push technique and skill. The essay is a great primer on what Bordwell calls Anderson's "planometric style." In other words, it's a nice way to explain to someone why Anderson's films always "look like that."

Bordwell compares Anderson's use of simple constraints to that of (another) Criterion darling, Ozu Yasujiro. In another featurette, F. Murray Abraham compares Anderson's tendency to assemble a "family" around his films to what he calls "the Bergman method," making for quite a pair of auteur name-drops in relation to Anderson's work.

(Speaking of Bergman, one wishes that the featurette in question -- "The Making of The Grand Budapest Hotel" -- were slightly more robust, along the lines of the feature-length "The Making of Fanny and Alexander." What we get here, instead, is a 20-minute collage of fly-on-the-wall video, more of a sketch of a production in motion than a detailed look at its shape.)

The back of the disc sleeve also boasts of "ephemera," which here come in the (physical) form of a poster and a gallery reprint of some of the film's production paraphernalia, and in (electronic) form with sequence animatics, miniature photography, and a boatload of archival EPK featurettes -- including an adorable 4 minutes of Bill Murray touring the town of Görlitz between setups.

It all comes together as a handsomely crafted document of Anderson's (second-most) recent work, as delightful as the film itself while also provoking un-guessed depths. It's a disc worth becoming obsessive over -- perfect quarantine watching.

Do you feel this content is inappropriate or infringes upon your rights? Click here to report it, or see our DMCA policy.
Ralph FiennesTony RevoloriWes Anderson