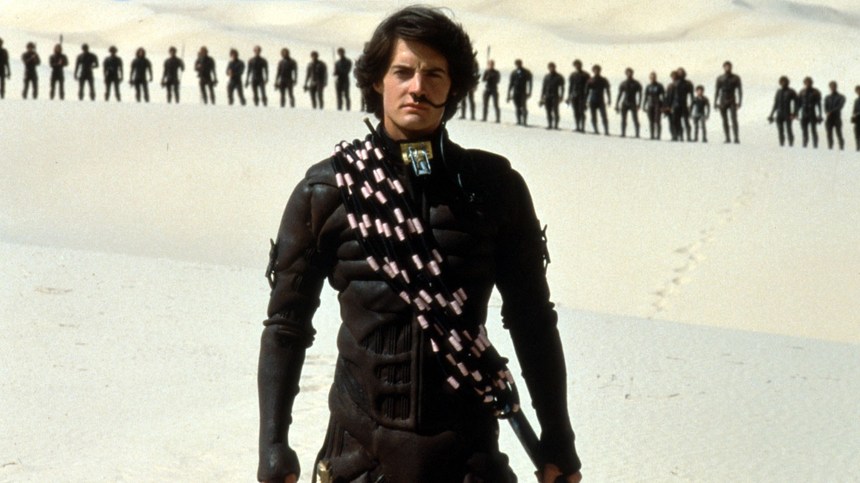 The whole concept behind 10+ Years Later is to revisit films about which time has potentially changed your opinion. When perusing David Lynch's filmography, I found myself routinely thinking, “Of course Dune is terrible,” and ignoring it to the extent that I could. But really, if one hardly remembers a film at all, and one likes or loves everything else that a filmmaker has done, doesn't one owe said film a second watch?

I consider Lynch to be my favorite living artist. I can find value in just about everything he's produced, even when it's a television commercial or a thinly-veiled transcendental meditation manifesto. In college I wrote an (overly long, and surely fawning) essay about his fascination with the duality of blonde girls-next-door and brunette femmes fatale.

In preparation for it, I re-watched every movie of his save for The Elephant Man, The Straight Story, and Dune. While I have always liked the first two, I never thought Dune was worth another thought, and Lynch's own admission of failure has tidily validated my avoidance.

Now, though, Lynch is enjoying both success and the sweet freedom of total creative control on Twin Peaks: The Return. For the third season's premiere, he basked in a standing ovation at Cannes, the same festival at which his work was booed 25 years ago at the screening of Fire Walk With Me. At 71, he has finally (long overdue) found a medium that suits him, a studio that trusts him, and an audience that will follow him. The sting of Dune's failure has hopefully diminished. So, in the interest of potential revisionism, let's give it one more look.

It's somewhat difficult to critique Dune in 2017, when all of its flaws and shortcomings were already laid relentlessly bare by critics upon its release over 30 years ago. And if not difficult per se, the task is surely unnecessary and redundant. Most negative reviews of the era focused on the film's incoherence, its tedious pacing and its general lack of intrigue. For Lynch devotees (especially looking back on the film and trying to reconcile it amongst his oeuvre), the complaints tend to hinge on its directorial anonymity: its seeming lack of Lynchian DNA.

For the moment, I will attempt an objective look at Dune as a film -- rather than specifically as a Lynch film. This should not be hard for me to do, because I had always followed Lynch's lead in writing it off as a project he never should have been involved in. This article assumes the reader has seen the movie, and there are spoilers ahead.

I have never read Frank Herbert's seminal novel, nor am I particularly good at following complex sci-fi or fantasy plotlines. That being said, Dune's final cut -- chopped from one that was, unsurprisingly, nearly twice as long -- employs an insultingly obvious voiceover gimmick. Characters end up reciting what they've just done, or plan to do.

In the most offensive example of this, Baron Vladimir Harkonnen, after a bloody and vaguely homoerotic murder, flatly states “This is what I'll do to the Duke and his family” over internal narration. If ever there was textbook example of how to ruin showing with an immediate, superfluous telling, this is it.

Beyond being irritating and tacky, the voiceover also cheapens the entire spell the film works to weave. Images don't receive space to breathe and gain meaning on their own. Any subtlety playing on the actors' faces or hanging in the air in beats between dialogue is shattered when the narration feeds us exactly what they're thinking.

Many cinematic adaptations of books rely too heavily on narration, either to advance the plot or to retain the quality of the author's prose. In Dune, it is strictly the former. Extra voiceover was unfortunately added in post-production in order to compensate for the loss of informative scenes.

Another problem is the hero, Paul Atreides, played by Kyle MacLachlan, who would go on to be a muse of Lynch's. Paul is a typical chosen-one archetype in that we are told he is important and special, but there isn't really much evidence of this in MacLachlan's performance.

He is able to tolerate intense, flesh-burning psychological pain and has prophetic visions. He is “the sleeper who must awaken” and carries the distinction of being a male born to a mother who was ordered to birth only girls. Yet, until the film's final third, he doesn't do much more than wander about emitting a bemused puppy-dog/pampered prince sort of aura. MacLachlan has obviously proven his talent by now, so part of the blame may be on the characterization and writing as much as his acting. 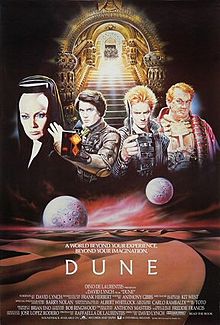 The love story, too, is exceedingly unconvincing. I didn't even remember that Dune had a romantic subplot, and now I can see why.

Paul has dreams of Chani (Sean Young) before ever meeting her, and when he does encounter her on Arrakis, in the midst of a showdown with the giant sandworms and roughly 90 minutes into the film, they both immediately agree that they are in love and will be together forever.

Perhaps in the book, Paul and Chani's fated relationship had more time to grow and deepen. In the film, it's so shallow and rushed that it can't elicit the emotion and drama and it strives for.

The sandworms themselves, however, are actually quite cool. While I remembered the political and dynastic intrigue, I had forgotten that much of the movie's third act dedicates itself to the subterranean behemoths.

The effects for the worms look far better when the beasts are partially covered by sand, skimming along like speeding trains. The shots of them emerging and opening their massive mouths have certainly not aged terribly well, but their immensity is nevertheless impressive and frightening. When Paul gains the ability to control them, and rides one around, he finally starts to earn that chosen-one reputation, and the movie feels refreshed and energetic. If only it showed such signs of life during its sagging middle.

On the whole, Dune's Lynchian fingerprints are faint. Much has been made of how the large-scale production, and multiple simultaneous shooting crews, removed the director's touch from the picture. Presumably a large chunk of it was sliced off in the editing room following that.

The fleshy tank creature -- which research tells me is called Guild Navigator? -- who speaks out of a crude, flappy orifice disappears from the film early on, and Baron Vladimir Harkonnen, a drugged out descendant of that naughty Willy Wonka blueberry girl, is in only a small percentage of scenes. These two minor characters loomed largest in my memory, doubtless because they are the most classically “Lynchian;” nightmare figures inserted into a world otherwise populated with characters that are recognizably human.

Ultimately, my reaction to the film was altogether more lukewarm than I expected. I did not uncover a newfound appreciation for Dune, but nor did I re-experience my initial distaste and exhaustion. There were elements I enjoyed -- the costume and makeup design, and just about any scene involving the aforementioned sandworms -- and stretches where my patience wore thin.

I couldn't find much of an in as a Lynch fan; most of the film's redeeming qualities are probably indebted to Herbert's story, and the world he built in the book(s). It's not a bad film. It's not a good one, either. If it seems like this article is petering out with a shrug, it's because that's basically how the movie left me feeling.

And yeah, Jodorowsky probably could have done it better.

Do you feel this content is inappropriate or infringes upon your rights? Click here to report it, or see our DMCA policy.
10 years later1984david lynchdunefrank herbertkyle maclachlanscifi