Sundance 2020 Review: DOWNHILL Serves as a Reminder That Julia-Louis Dreyfus Is a National Treasure

Julia Louis-Dreyfus delivers one of the best performances of her decades-long career; Nat Faxon and Jim Rash directed. 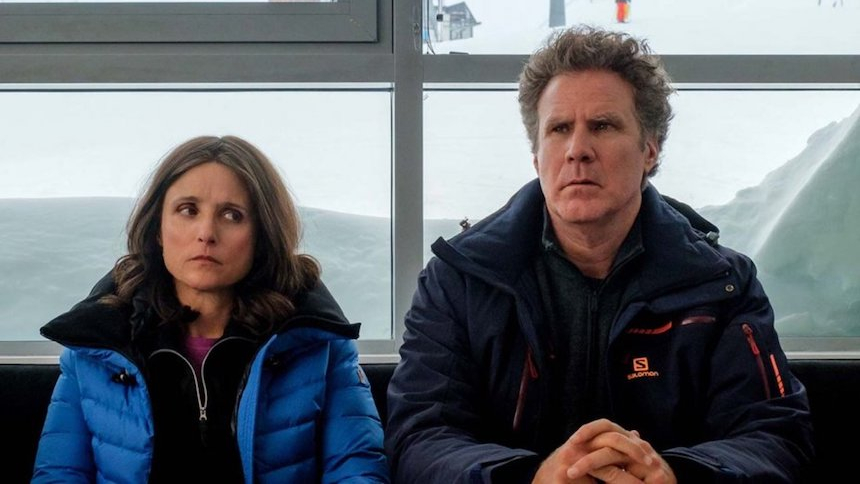 Written by Jesse Armstrong (Succession), Nat Faxon, and Jim Rash (Faxon and Rash scripted the Oscar-winning adaptation of The Descendants and also wrote and directed The Way Way Back), with serviceably competent direction by Faxon and Rash, Downhill all but belongs on the disposable entertainment pile, with one notable exception: Julia Louis-Dreyfus.

Louis-Dreyfus delivers one of the best performances of her decades-long career, a dramatic turn atypical for a performer known primarily to audiences for her long-running comedic roles on Seinfeld and Veep on network television and premium cable, respectively. But for all of her commendable efforts and exertions, Louis-Dreyfus can't write and direct too. She also can't play more than one character at a time, especially since Faxon and Rash intended Downhill to be set in a reasonable approximation of our own reality.

As Billie Stanton, a successful American attorney on vacation in the Austrian Alps with her husband, Pete (Will Ferrell), and her teen sons, Finn (Julian Grey) and Emerson (Ammon Jacob Ford), Louis-Dreyfus provides Downhill with a much-needed moral center and compass. After a seemingly innocuous start to their vacation, they settle in for an outdoor lunch at their high-end hotel. Before they can order, though, a planned avalanche goes slightly sideways, sending Pete scrambling, cell phone in hand, for safety, while Billie huddles with her two sons, awaiting a certain death that never comes.

For Billie, though, Pete's abrupt, "me-first" departure sends her into a spiraling rage that she attempts to ignore in the interest of (nuclear) family unity. Fully aware that his lack of bravery puts his masculinity in doubt, but refusing to acknowledge his dubious behavior, Pete pretends ignorance, immediately ordering lunch without a second thought or care in the world.

As their vacation slowly goes off the snow rails, Billie takes the equally dubious advice of an over-sharing, overly friendly German hotel manager, Charlotte (Miranda Otto), and accepts a private ski lesson from the thirty-something personification of Italian virility, Gugliemo (Giulio Berruti), while the willfully clueless Pete takes his sons on a day trip to a nearby children's park and later, after disappointing Billie again through a combination of carelessness and cluelessness, he gets absolutely feces-faced with another vacationing American (and co-worker), Zach (Zach Woods).

Pete openly admires Zach for his newfound "live for today" attitude, but it's almost immediately clear that Zach's superficially appealing attitude derives from Zach's relationship with the free-spirited Rosie (Zoe Chao), and not organically from Zach himself.

Everything comes to a (trail) head when Pete, still pleading ignorance while Zach and Rosie sit in awkward silence, receives one of the most brutal takedowns in a romantic drama or comedy this side of Marriage Story, courtesy of Billie in heat-seeking mode. It's one of Downhill's better-scripted scenes, but in Louis-Dreyfus' hands, it turns into a master class in acting and reacting. The play of volatile emotions on Louis-Dreyfus' impressively expressive face says far more than any written or spoken dialogue could.

To be fair, Ferrell tries to hold his own with Louis-Dreyfus in their post-avalanche scenes together, but it's also painfully obvious he's no match for his onscreen partner, especially since Faxon and Rash force him to play a big, lumbering oaf, the latest in a seemingly countless series of similar characters affected with a severe case of arrested development.

Under Faxon and Rash's often awkward, unfocused direction, Downhill segues between fracturing family drama and big, broad comedy. Otto's Charlotte seems to have wandered in from the set of a raunchy, Euro Trip-style comedy, not a meaningful, poignant black comedy-drama Faxon and Rash obviously intended for their efforts.

The constant switches in tone and mood reduce Downhill to disappointing also-ran, forgettable status, acceptable at best for a late Sunday afternoon stream and not a full-blown theatrical entertainment. Even Danny Cohen's boldly color-conscious, crystal-clear cinematography does little to distract from Ferrell's typically broad performance or a film that ultimately fails to resolve the potentially destructive contradiction at the center of Billie and Pete's floundering relationship.

The film enjoyed its world premiere at the Sundance Film Festival. It will open in U.S. theaters via Searchlight Pictures on Friday, February 14, 2020.

Do you feel this content is inappropriate or infringes upon your rights? Click here to report it, or see our DMCA policy.
Jim RashJulia Louis-DreyfusNat FaxonUSWill Ferrell