Ard Vijn
Editor, Europe; Rotterdam, The Netherlands (@ardvark23)
Tweet Post Submit
Last year I started my overview of 2019 with lamenting about how few films I had seen, as I noticed a steady downward trend. But in 2020? I caught up. Months of lock-downs for my whole family left us with a whole lot of evenings where we just decided to pop in a movie. For new films, this was my worst year in decades. Still, I easily saw half as many films this year compared to 2019. A record even.

Writing for Screen Anarchy is not my first profession; my daytime job is a very different one, and it pays the rent and my movie addictions. As such, the weird year it was had impact on my day-job, and sabotaged most of my writing-time. So even though I saw a record number of films, I think it was also the year which had me write the smallest number of articles on this site. I hope to catch up on that this year... as writing about films is still a passion of mine.

But without further ado, here is my gallery of musings about 2020. Click on the edge of the pictures to scroll through them, and I hope you have fun reading bits of it! 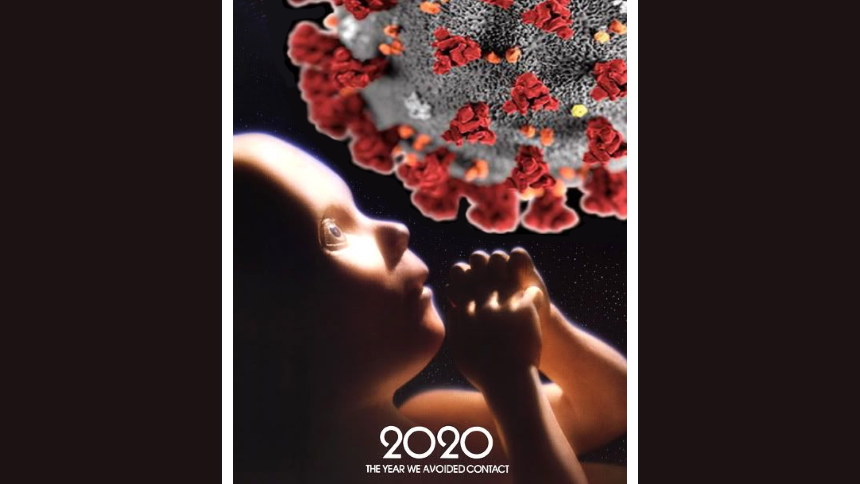 The Elephant in the Room

Because it's hard to talk about 2020 without mentioning the ongoing pandemic, let's start with it. Labelled "corona-virus disease 2019", the plague changed everyone's year. Even if you didn't get ill from it, or had someone close to you die from it, the effects were devastating to our way of life. Social contacts changed. Jobs changed or were lost all-together. Economies worldwide are in tatters, and private relationships are strained. Never in the history of mankind did we have so much technology to help us keep in contact, yet we still all got the taste of cabin fever.

Meanwhile, the film industry changed, irrevocably. If 2021 brings us anything, let it be hope for light at the end of the tunnel, and please, with millions sick worldwide already, don't let that light be a train rushing towards us with a new, deadlier mutation on board. 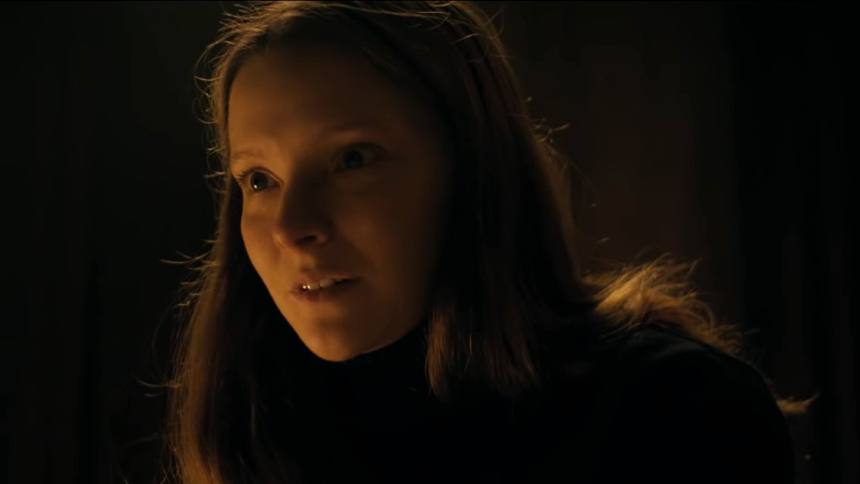 If you see someone looking at you like this, run away. Run, don't walk. In Saint Maud, Morfydd Clark plays Maud, a young nurse who is a fiercely devout believer in God, while the dying patient she cares for revels in hedonism. When the nurse decides her patient's immortal soul needs to be saved, things get very dark.

Quoting from my review:

First-time director Rose Glass keeps her film lean and mean, focusing fully on Maud's descent towards possible madness, while giving us occasional hints that something may be physically wrong as well. Maud's senses seem warped at times, with light and sound playing tricks, sometimes even throwing Maud into spasms of religious bliss.These orgasmic 'fits' are terrifying to behold, and accompanied by one of the best soundtracks I've heard in years.

I saw it at the International Film Festival Rotterdam, a month before we all went into lock-down, and an early highlight it was.

The Long Walk to Rotterdam

Speaking of the International Film Festival Rotterdam, in 2020 my home town programmed The Long Walk, a sensitive and intelligent film about a time-travelling serial killer who talks with ghosts, set in Laos in the near-future. I loved the film (as did Shelagh Rowan-Legg) and got the opportunity to interview its director, Mattie Do, and it turned into the best interview article I've done in years. Lots of laughter, lots of information, and (jungle or not) Mattie doesn't beat about the bush.

Check the interview in full here. 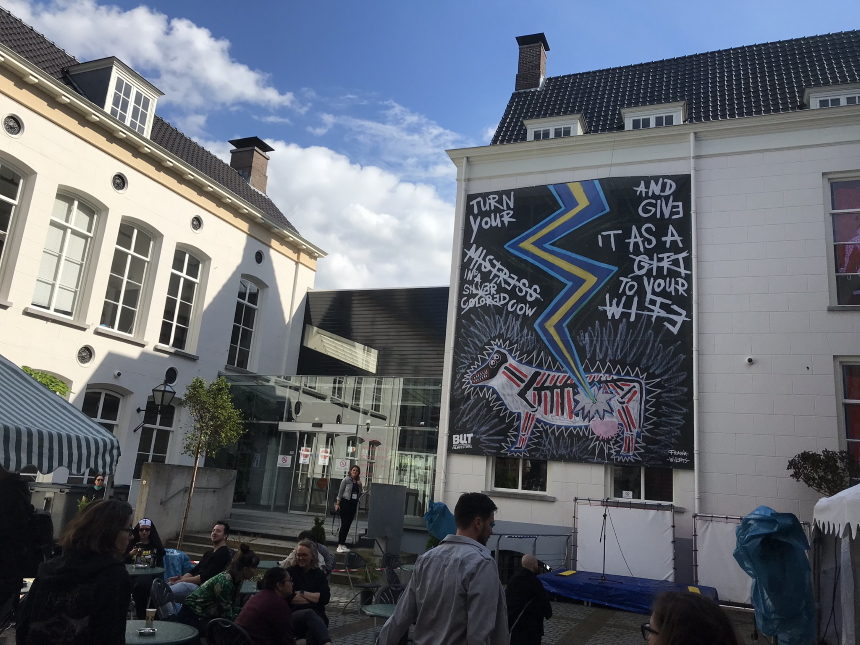 Dutch film festivals were of course impacted by the pandemic. The International Film Festival Rotterdam already had to be a bit careful with visitors, as the fest is famous for its Asian slant in programming, and many of the guests were planned to fly in from China. But that was nothing compared to Imagine Amsterdam, which had to be hastily postponed a few months and drastically changed. BUT Film Festival and Camera Japan had to change their set-up as well, but were thankfully positioned between the first and second wave, when we were partly unlocked and the occasional cinema visit was discouraged but still possible.

The BUT (B-Film, Underground and Trash) Film Festival in Breda, seen in the picture above, organized an on-line panel discussion about the European underground Indie scene (asking the question if a platform was perhaps necessary there), and allowed me to be the moderator. A first for me! 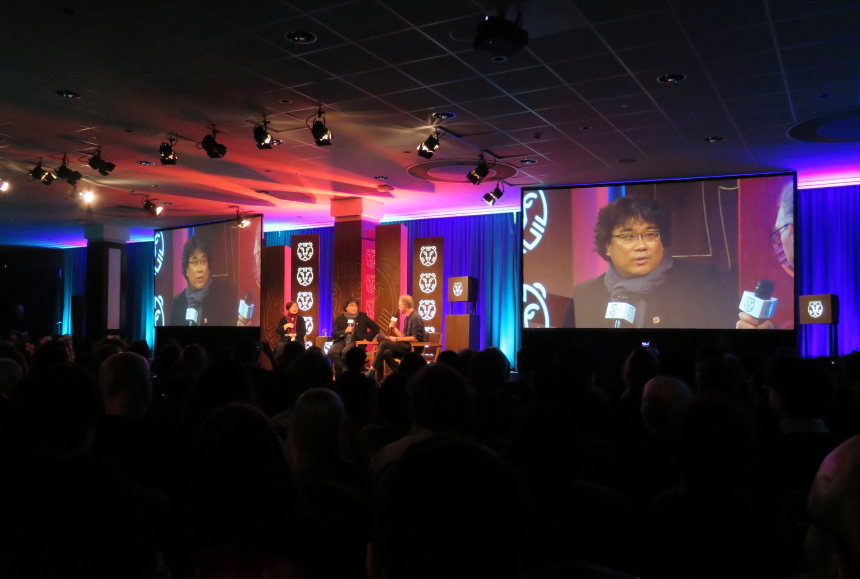 When Bong Joon-ho Came to Rotterdam...

Another absolute highlight was Bong Joon-ho's visit to the Netherlands, to present the world première of the black-and-white version of his fantastic film Parasite. Bong was already in Los Angeles for the preparations of the Oscar gala night, when he briefly jumped out for a few days to visit the International Film Festival Rotterdam. He was received as a superstar, and the tickets for his masterclass event were the fastest to be sold out. His Q&A after the première lasted an epic 45 minutes and I would have easily loved another 45 at least.

You can check my review of Parasite here. 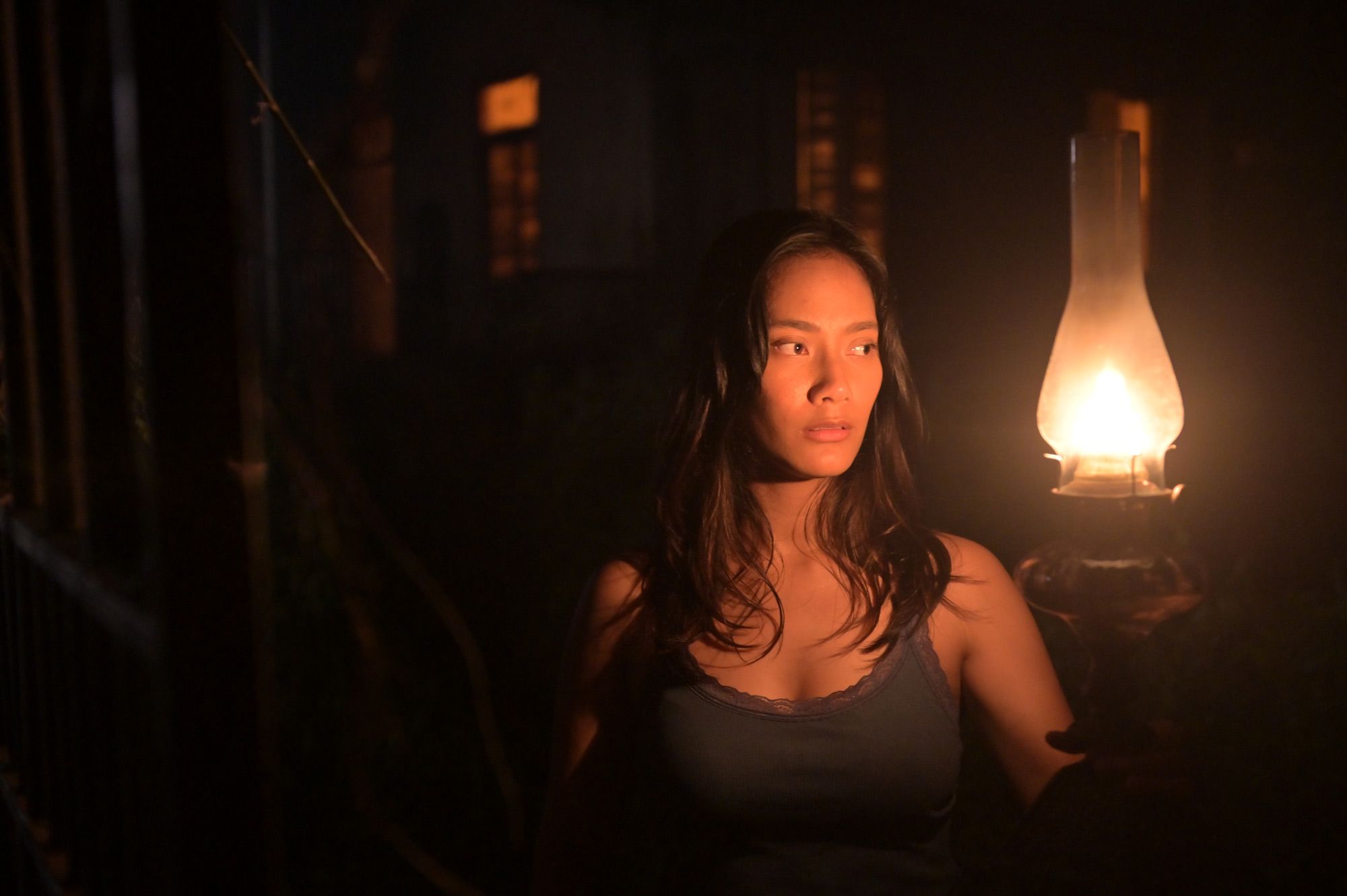 Another happy surprise early in the year was Impetigore. That Joko Anwar's new horror film turned out great was no surprise: the man has been making plenty of these films by now. But what never fails to get me is how easy he makes it look. In Impetigore, a young woman survives a murder attempt, and investigates what the motive could have been. Her search leads her deeps into the Indonesian jungle, where she stumbles upon a cursed village. Joko Anwar effortlessly switches between detective thrills, arcane creepiness and gory horror. And the end result is very entertaining.

Our J. Hurtado thought so as well, as you can read in his review. 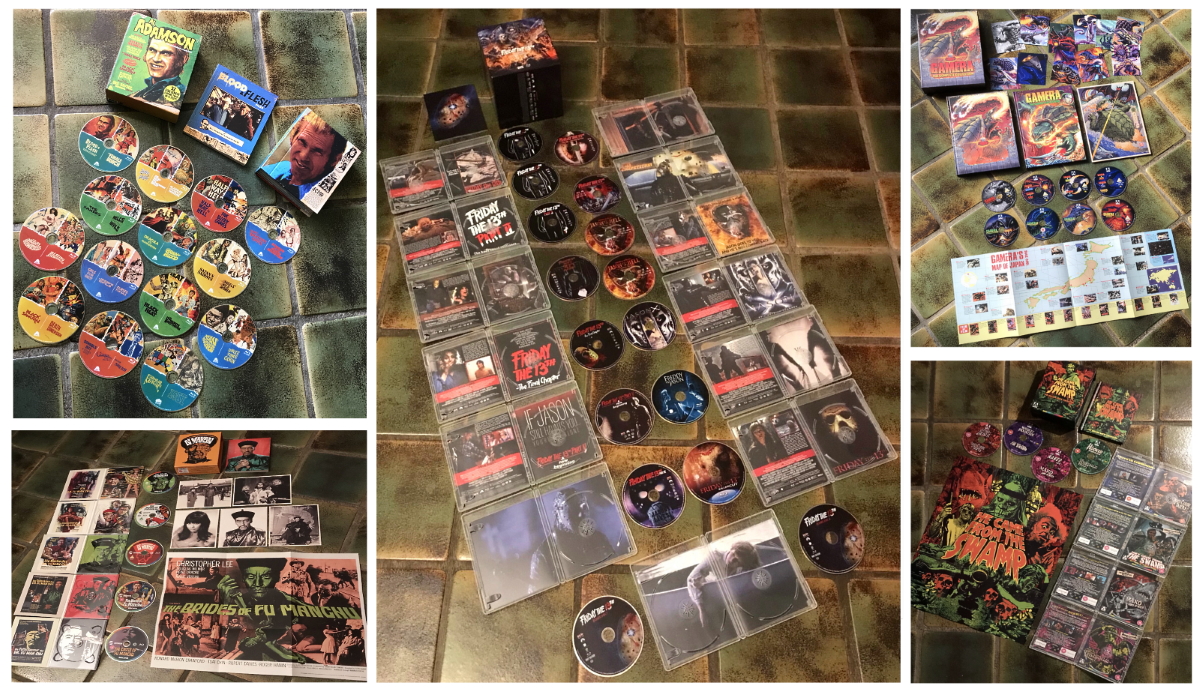 Genre boxsets: an embarrassment of riches...

Every year we see excellent boxsets appear, and while the general public doesn't buy discs (streaming is the norm), for collectors the market is still very much alive and kicking.

And if you were a collector with a penchant for genre films and B-cinema, whoa, did 2020 deliver. The sets in the shot above show just a sampling of the riches which could be purchased. The big one in the middle is the new Friday the 13th boxset, released in October by SHOUT! Factory, against all odds managing to get all films together in one box, with many new extras and, especially for the older films, better transfers. Then, starting in the top-left corner and going clockwise, you first see the amazing 32 film boxset dedicated to Al Adamson films, courtesy of Severin (and yes: the documentary Blood and Flesh is in there too). Next we have the VERY flashy Gamera boxset by Arrow. Next we stay with Arrow for their tremendous collection of William Grefé films, and finally we get Indicator's boxset of Fu Manchu films, all with Christopher Lee playing the dastardly genius.

Seriously. The year 2020 is going to be hard to top, in this regard. One of my biggest regrets of last year was not having the time to put up "Pretty Packaging..." articles for each of these... 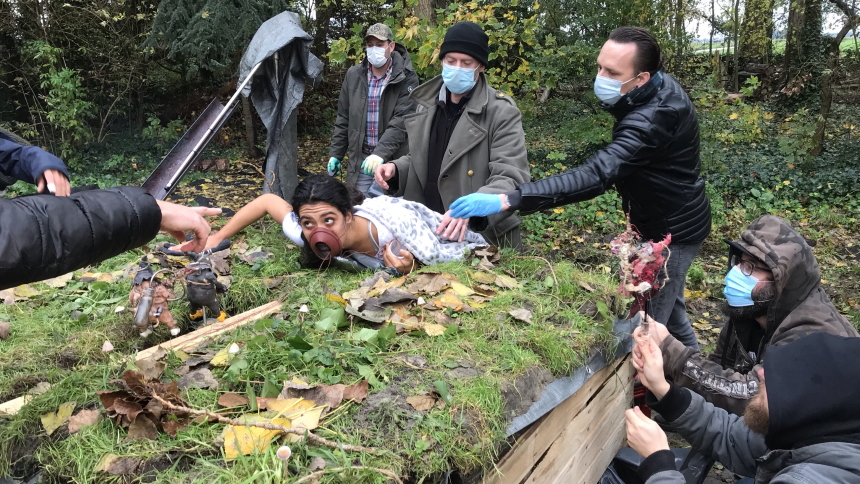 While Covid-19 shut down a lot of sets, some people still managed to get some shooting done. In November I was invited to watch the creation of a few gory scenes for the upcoming horror short Gnomes by Ruwan Heggelman, with the practical effects created by artist collective The Mad Scientists. In the scenes, actress Moïse Trustfull's character gets nailed to the ground by angry garden gnomes, and prepared to be fed into a meat mincer. Brrr...

But movie sets are fun. It's amazing to see people work movie magic, especially in difficult circumstances. I had a whale of a time. Not sure I could say the same about Moïse, who had to be a total trooper for the entire shoot while we were playing around with knives, fake blood and killer gnome puppets.

This is a year-overview, and I only have four bullets left of my dozen, so it's time I get to the "best of" lists. Screen Anarchy's best-read article which was released last year was Mel Valentin's review of Brandon Cronenberg's excellent Possessor (more about that later...). For me, it looked like my best-read article would be the review for the Black-and-White release of Bong Joon-ho's Parasite, buuuuut...

...in December we suddenly had Evangelion 3.0 + 1.0: Whatever It's Called news. And Evangelion tops everything, as we all know. Check the stupendous trailer here. 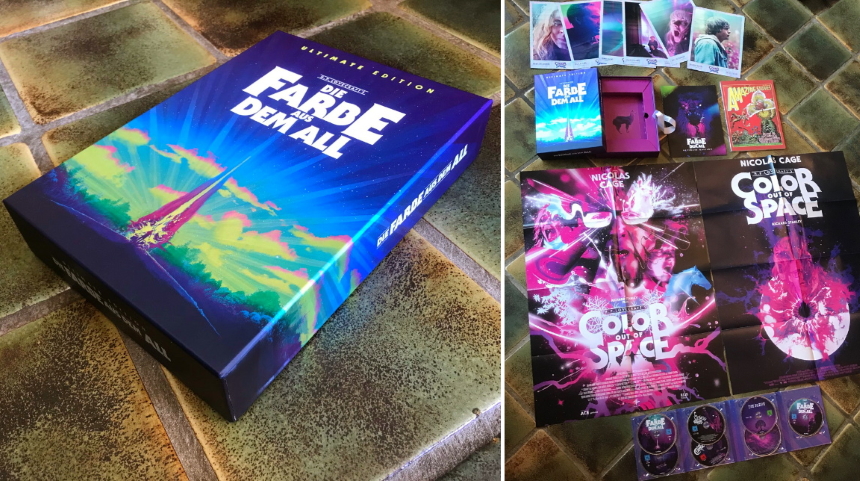 In 2020, my favorite Special Edition film release was...

As mentioned earlier, there was no shortage of great releases last year. Hell, I could write a separate bullet just about Criterion, which released jawdropping boxsets for a variety of subjects like Karel Zeman, Agnes Varda, Bruce Lee, and topping even all of those at the end of 2020 with a Fellini release.

Single films also saw beautiful releases, especially in the United Kingdom. Romero's Dawn of the Dead got a seven-disc (!!!) edition to die for, and films like Flash Gordon and (Verhoeven's) Total Recall weren't treated badly either. But my absolute winner for crazy single-film-release must be the German Ultimate edition for Richard Stanley's The Color out of Space, which included almost all earlier film versions, a reprint of Lovecraft's story (and the entire magazine around it, for good measure...), posters, booklets, huge cards, an iridescent packaging, seven discs...

Check it out. Releases can hardly get better than this one. 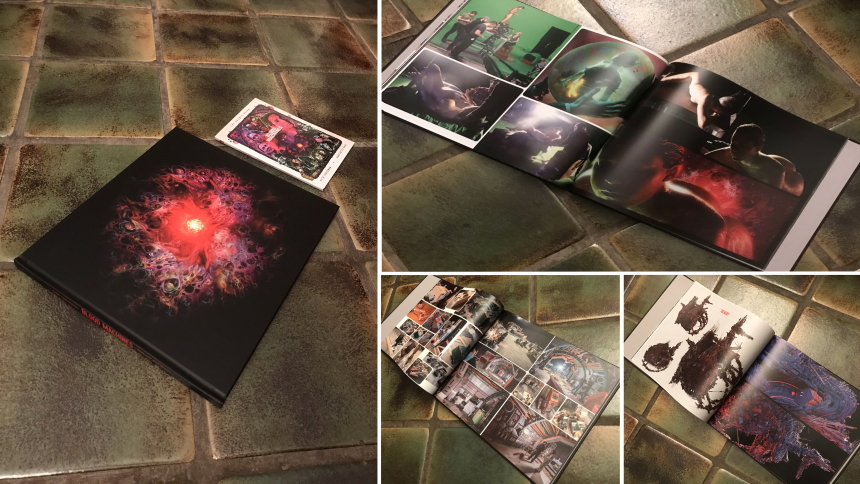 In 2020, my favorite film-related acquisition was...

This normally features a book, and what do you know? This year, it's... a book! Actually I'm cheating because technically speaking, I bought this particular book in 2016 already. That's when the Kickstarter campaign ran for special effects duo Seth Ickerman's short Turbo Killer 2: Blood Machines, which would be a 20-minute follow-up to their great videoclip for Carpenter Brut's Turbo Killer. One of the perks for sponsors was a book. Another perk was for sponsors who put MORE money in the project, and it was a BIGGER book. Well, I thought "in for a penny, in for a pound", so I went for the bigger book...

But that was 2019. In 2020, a longer version appeared as a series on Shudder, and finally the BIGGER book was released as well. And it's beautiful. Tons and tons of designs and behind-the-scenes pictures. And look at the size: in that picture on the left, I put it next to a Blu-ray for scale. Only a hundred of these babies exist, and you can't have mine (sorry). 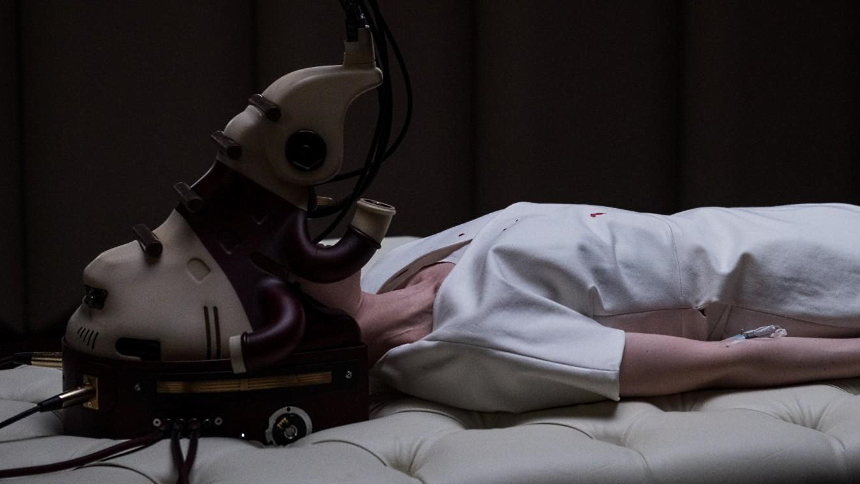 Brandon Cronenberg's Possessor. And apparently I'm not the only one thinking that way: last week, it topped our site's "Best of 2020" list.

It's ridiculously brutal, and occasionally even foul. But it all serves a surprising purpose. Cronenberg-junior takes his film in a few unexpected directions, and maybe it's not for everyone, but it kicked my ass.

And do read Mel Valentin's review of Possessor, which, as said before, was Screen-Anarchy's best-read article of last year.

More about Evangelion 3.0 plus 1.0: Thrice upon a Time