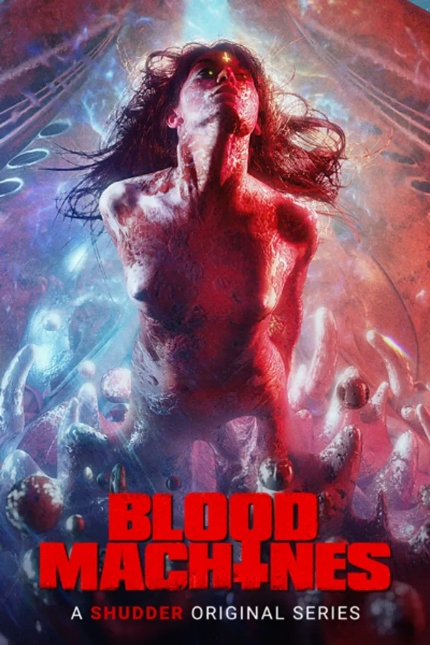 Blood Machines
The film enjoyed its world premiere at L'Etrange Film Festival in September 2019. It is now streaming on Shudder.

Even though it runs just 50 minutes, Blood Machines is a full-bodied narrative experience.

Set up briskly, we learn that two men are on a mission in space to track down a foreboding machine that threatens the order of the universe. Really, though, the story is but a framework for the creative visual atmosphere that serves as both the backdrop and the raison d'être of the film, written, directed, and edited by Seth Ickerman (a nickname used by two filmmakers, who previously made the music video Turbo Killer).

The scratchy aesthetic mixes color and light to create a universe that is markedly different from our own. Against that background, the two male "space hunters," one older, one younger, fit in well in their post-wasteland outfits, even though they do not necessarily resemble any astronauts or space explorers from other sci-fi films.

Once they've located their quarry and capture the ship's crew, they endeavor to eliminate the threat entirely, and that's when a humanoid form begins snaking out of the belly of the ship. What slithers out is in the form of a naked woman, covered in multiple colors and an inverted cross, who then launches into space.

Yes, that's definitely an arresting image, on top of the visuals that have already been established. (And it is reminiscent of Lifeforce, and could be similarly interpreted as exploitative.) From there, we learn a bit more, and the story progresses to a satisfying conclusion, but primarily this is a film that is told through its imagery.

As a film buff with a special interest in the 1970s and 80s, Blood Machines is definitely my jam. It feels like something that was lost in late 1979, discovered again in 1983, and then finished today.

As a hardcore fan of science-fiction films in general, Blood Machines is also my jam; I especially appreciated the tiny call-outs to past classics from the 60s through the 90s. The synth score by Carpenter Brut feels wonderfully appropriate and provides an appropriate underscore as the action unfolds.

Now that I've explained why the movie feels like it was made for me, will it appeal to anyone else?

Summing up: Anyone who enjoys and/or merely appreciates darkly ambitious sci-fi spectacles will find nourishment from Blood Machines.

Do you feel this content is inappropriate or infringes upon your rights? Click here to report it, or see our DMCA policy.
Anders HeinrichsenElisa LasowskiFranceJoëlle BerckmansSeth IckermanShudder