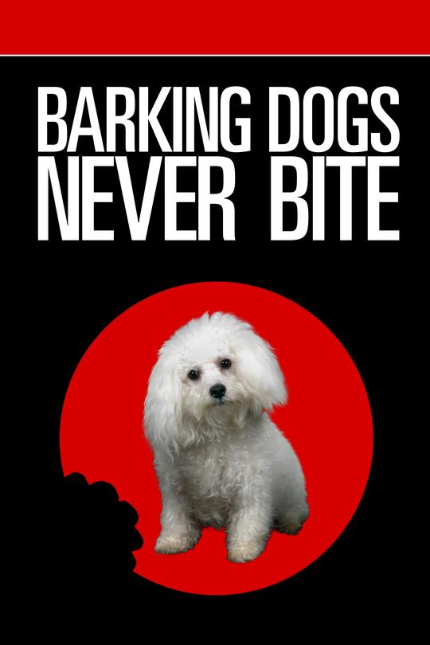 The immediate hook of Bong Joon-ho's directorial debut is a yapping dog, whose insistent bark quickly drives an anxiety-ridden, would-be professor over the edge.

As a fellow apartment dweller, I can certainly sympathize with the situation and the emotion. From there, however, writer/director Bong goes places with his story and his characters that I never would have imagined.

As a relative latecomer to Bong -- I first saw The Host three times in theaters at festivals -- I somehow managed to miss both this title and Memories of Murder, so it was a true pleasure to finally catch up. To be honest, I have no idea if I would have reacted so positively 20 years ago, but all I can say is that it plays very well today.

It would be easy for me to wax rhapsodic about Bong's monster movie par excellence. Back in the day, here's some of what contributor Richard Brunton wrote after he saw it at the Edinburgh Film Festival:

"I'd recommend this film even for those not interested in Asian Horror, for this can't be classed alongside what you would expect from a typical Asian Horror, indeed there's not even a lot of horror. This is a suspenseful, thriller, drama, comedy, you're getting the idea. It's great entertainment with some brilliant moments of shock and terror. Well worth watching."

Our friend and contributor Charles Webb was not entirely satisfied, as he expertly expressed in his review, writing in part:

" Centering on a mother's attempts to protect her mentally challenged son after he's accused of murder, superlative acting and direction can't redeem what feels like an underwritten story. ... The genius of Bong Joon-ho's previous work has been its means of manipulating moods and tone while expertly conveying character in a generally magnificent visual style. Unfortunately, Mother only delivers on the style and not so much the substance."

His review sparked a lively discussion in the comments section.

Need I say anything more about the Academy Award-winning family picture? Our own Pierce Conran reviewed it out of Cannes last year and wrote, in part:

"Where Parasite lands within Bong's filmography will depend on the viewer, but there's no doubt that his return to Korean filmmaking after a decade away is a triumphant one."

More about The Host