Anno Hideaki does the impossible and pulls an emotionally satisfying end to the Evangelion franchise out of his hat. 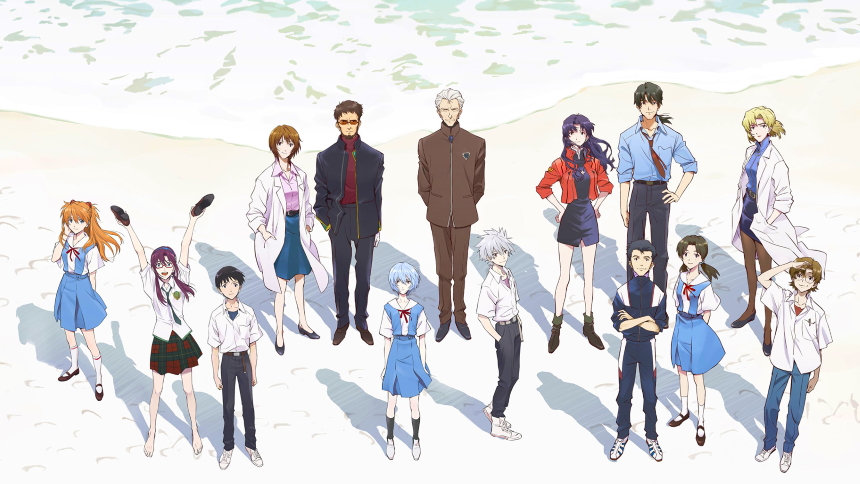 Let me start this review with apologizing for its late arrival. And no, I didn't do that on purpose to mock its subject's many delays.

Last March, the fourth and final film in the Evangelion reboot series was released in Japan and it turned out to be the most profitable one yet. Anno Hideaki's Evangelion franchise is 25 years old this year, and, in a timely fashion, he has finally made an ending to it. Not that it's the first time he did that. The title Evangelion: 3.0 + 1.0 Thrice Upon a Time might be seen as an ironic joke, and you can still wonder, even half a year after the film was released, if that actually will become the final title under which it will referenced in the future. It sure had plenty of different titles in the past...

Like the previous three films, I hoped to be able to catch Evangelion: 3.0 + 1.0 Thrice Upon a Time in a cinema, either in general release or at a festival. Unfortunately, the international distributor priced it out of the Dutch market, and sold streaming rights to Amazon Prime already. I waited a couple of months but with the year's end in sight (and COVID-lockdowns in effect again) I could no longer pretend this was going to be in any cinema near me soon. So I gritted my teeth, started the Prime app, sat very close to my television, and streamed it.

In the universe of the Evangelion franchise, contemporary Earth has been hit by a phenomenon called "Second Impact" (the "First Impact" being whatever killed off the dinosaurs). Because of it, half of the world's population is dead and the oceans are red and sterile. Worse: giant monsters attack Japan, trying to force a "Third Impact" which will finish the job of killing all humans. Thankfully, people have bundled their resources and built giant bio-mechanical robots to fight these monsters. The catch: these can only be piloted by very few people, and teenagers are the only successful pilots. So the job of saving the world, over and over again, falls on the small shoulders of Shinji, a traumatized boy with a minority complex. Hey, no pressure... 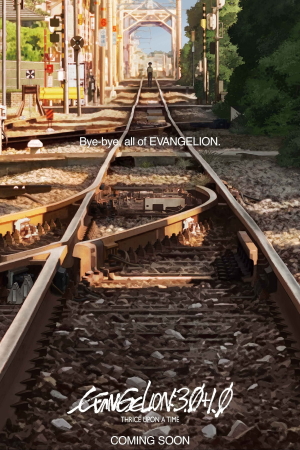 This story was originally told in a television series, but Anno Hideaki wasn't satisfied with how that developed (long story...) and announced back in 2006 that he'd start over and tell it all again, decently this time, through four films. And here we are with film number four. Though the original Neon Genesis Evangelion series from 1995 cannot be seen through Prime (it's on Netflix), Amazon does have the three previous reboot films. A good thing that is too, because it makes no sense whatsoever to see Evangelion: 3.0 + 1.0 Thrice Upon a Time without having seen the others first. But for those who do make the effort, Anno provides a surprisingly solid end to this series, and, impressively, even to the whole quarter-century-long franchise.

He did take his time though... in my (negative) review of the previous film, Evangelion: 3.0 You Can (Not) Redo, I wrote:

Oh, rest assured I will go see the fourth film. Number three stops sort-of in the middle of whatever story it has going, and I do want to know how it ends. (...) But am I still truly aboard of this train? I'm not sure any more. I do no longer feel emotionally involved with what I see on the screen.

That was back in 2013. Anno Hideaki took eight and a half years to finish this fourth film, even doing Shin Godzilla first. Fittingly enough, Evangelion: 3.0 + 1.0 Thrice Upon a Time is a monster in itself: a two-and-a-half-hour long epic of epic epicness. But guess what? Against all odds, he got me caring about Evangelion again! 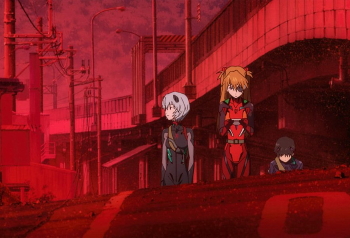 Fans of batshit crazy Eva-action immediately get serviced with an unbelievably grand fight in which the city of Paris is being reclaimed by what we tentatively consider to be the good guys. After that, the film switches to another part of the world and we see Shinji, Asuka and a Rei-clone where we left them at the end of film three: walking through the dead red wasteland which covers almost all of Earth, a disaster caused by Shinji's many mistakes. Soon they get picked up by friends and brought to a small village where everything seems normal. Grass is green, people are able to raise crops, even get pregnant... a veritable oasis for our heroes to rest a while. A gigantic battle looms though, between the two organizations NERV and WILLE. Shall all life on Earth be destroyed to make way for the next step in humanity's evolution, or will Earth be restored? As always in any iteration of Evangelion, much will depend on Shinji's mood, and as he feels himself responsible for the deaths of billions of people, Earth is basically more screwed than ever...

Or is it? Interestingly, in the fourth film's opening two sections, Anno Hideaki addresses most of the issues I had with the third film. The fights are ridiculous but fun, and ridiculously well accomplished on a technical level. Story-wise, it also provides hope: Earth isn't necessarily doomed (yet), and parts can apparently sometimes be healed. Shinji getting some much-needed rest in an environment straight out of a Studio Ghibli film restores not just him, but us, the audience, as well. This hope runs as a thread through the remainder of the film. It provides suspense, as there is finally something for the heroes to lose again, and maybe we finally spot a glimmer of... growth? In Shinji?

Evangelion has always been part hard-drug, part emotional rollercoaster, and has provided its fanbase with endless moments of delight and disappointment. The whole franchise has always been a prime (haha) example of a flawed masterpiece, and the four reboot films are no different. But Anno Hideaki has finally managed to grasp everything there was, force it together, and tie a giant bow around it. I know three people who think this was the best film of 2021. One of them has seen it six times already and still ends up crying every time. Me, I'm not quite that far yet, though its end credits hit me hard, also because of the excellent, EXCELLENT music...

So I need to hand it to Anno Hideaki: sometimes, the only way to close an opened can of worms is by sealing it inside a bigger can. And with Evangelion: 3.0 + 1.0 Thrice Upon a Time, he did exactly that.


(Evangelion: 3.0 + 1.0 Thrice Upon a Time and the three other Rebuild films are currently streaming on the Amazon Prime platform, and can be accessed as part of its subscription.)

More about Evangelion 3.0 plus 1.0: Thrice upon a Time