Ard Vijn
Editor, Europe; Rotterdam, The Netherlands (@ardvark23)
Tweet Post Submit
Last year I started my overview of 2018 with lamenting about how few films I had seen. The sad truth is: in 2019 I saw even significantly less. I strive for at least 150 films each year, yet in 2019 my tally ends with a scant 120. Ten a month? Do I even LIKE movies anymore?!

To make matters worse, people keep telling me what a great year for cinema 2019 was, "maybe even the best of the decade". Grrr...

But sometimes things happen in your non-film life which require attention. For me, 2019 was a tumultuous year, in health, in family matters, in paying jobs... which means that binge-watching a television series at home was more likely to happen than, say, a trip to a film festival. I caught up to such classics as Peaky Blinders and Penny Dreadful, and yes, that took its toll on the film front.

Does that mean I do not have a dozen of musings about 2019? Truth be told, I was tempted to leave it at ten, but nevertheless I suddenly found myself with fourteen items. So heh, apparently I DO still like movies. A bit of pruning later, I was back at ye olde dozen, and here they are... Click on the edge of the pictures to scroll through them. And may 2020 bring us all luck and awesomeness! 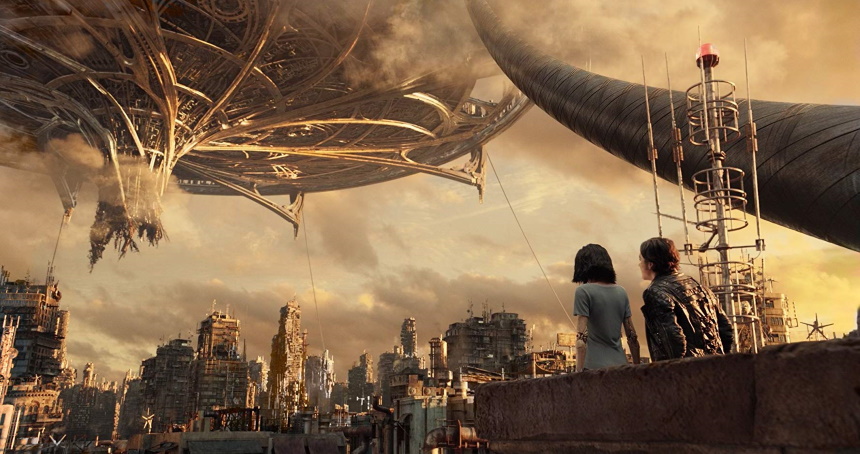 Early in the year, Alita: Battle Angel was a very nice surprise indeed, and arguably the most fun my inner 12-year-old has had in a cinema this year.

Sure, it's a shallow adaptation of its source material, and at times awkward and predictable. But it is also very entertaining, and refreshingly spectacular, both in its many fights and in its gorgeously rendered city-skapes. Those who refused to see it because of the "big eyes" issue sure missed out.

As several people around me said: they'd better be quick with bringing on that sequel. 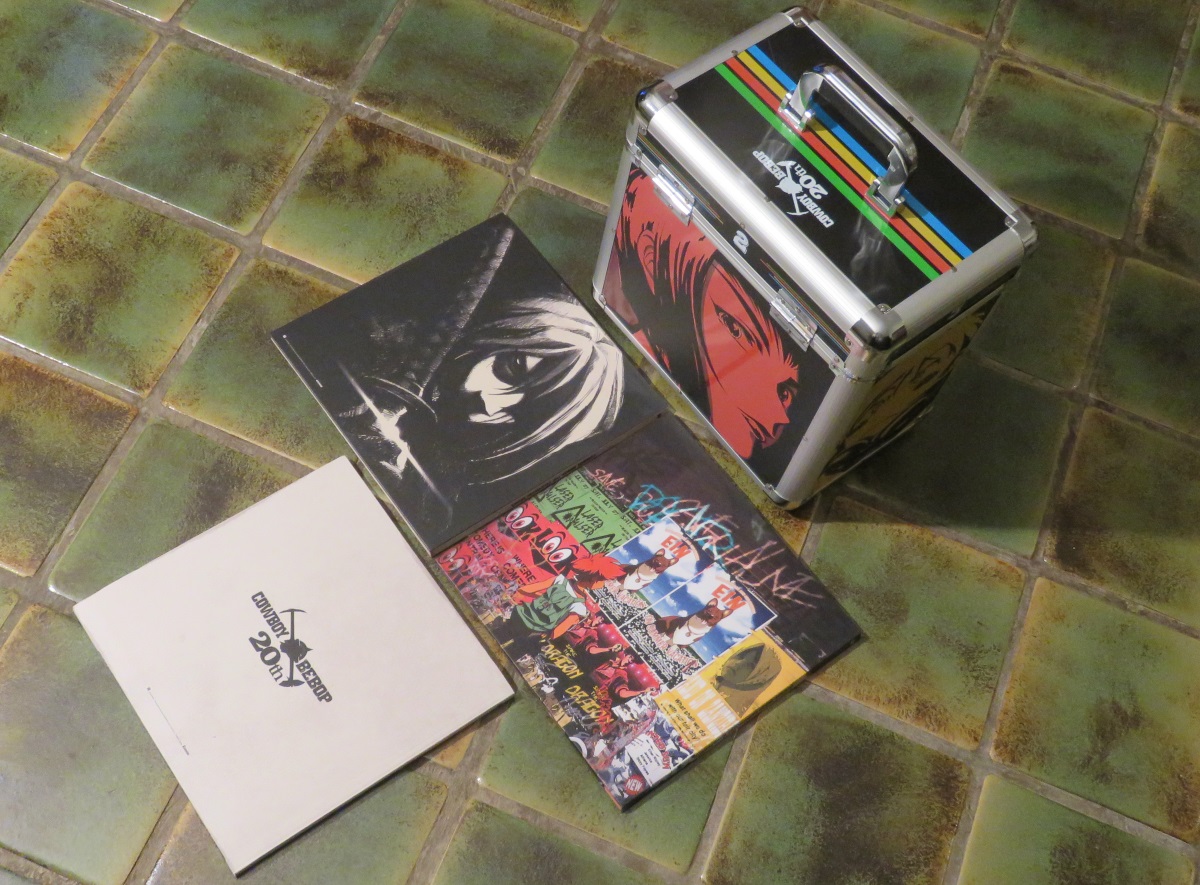 As a nerd and an analist, I took a peek behind the site's numbers to see which article of mine was the most-read in 2019. And guess what: it was my Pretty Packaging: COWBOY BEBOP Gets An Ultimate Edition article.

Well, granted: that was one insane piece of packaging! 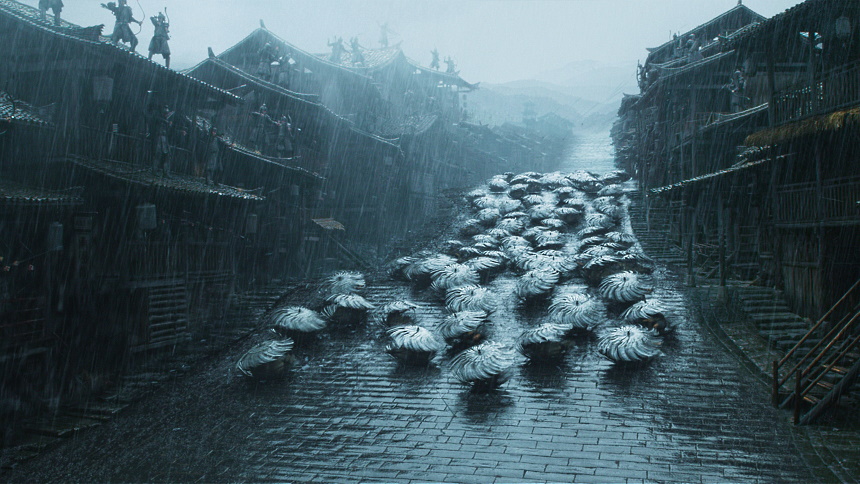 What's black, white, red, wet and awesome? Zhang Yimou's "historical" action drama Shadow, that's what! I saw it at the Rotterdam International Film Festival, and what a treat it was.

Combining serious drama with fantastically over-the-top action sequences (including a raid on a fortress which would not have looked out of place in an S.S. Rajamouli film), Zhang Yimou paints a gorgeous picture with a strictly limited art direction and an incredible use of sound. Maybe Shadow is not a masterwork, but there was definitely a master at work here.

Endgame. Or rather Endgame, Set, Match, and Iron Man.

More than a decade ago, some people took a tentative gamble with trying to create a build-up towards an Avengers film in 2012. Saying it paid off is an understatement. This year, we saw the cap on that massive 20-plus-films' story, and while people can argue whether this is cinema or not, it was as satisfying a clusterfuck as any big comic book cross-over event.

Twenty years ago, I never thought I'd see anything like this. That a similar "Big Ending" happened in the same month on television with Game of Thrones was remarkable. Can anything be more spectacular? Do we actually want anything more spectacular? This may be as much emotion and destruction as I can take already!

When news arrived that the creator of the Psycho-shower-scene documentary 78/52 was going to aim his focus on another classic scene - the "chestburster" from Alien - I was laughing with glee. What's not to love about THAT idea?

The end result of that idea was a documentary called Memory - The Origins Of Alien, and while it beats about the bush a bit, it mostly does it in an entertaining and informative way. In short: if you're a fan of Alien (or just agree that it's a classic) I strongly advise you to check out this documentary. Audiences at the Imagine Film Festival in Amsterdam (where I saw it) awarded the film an 8.2 out of 10, which is damn impressive. 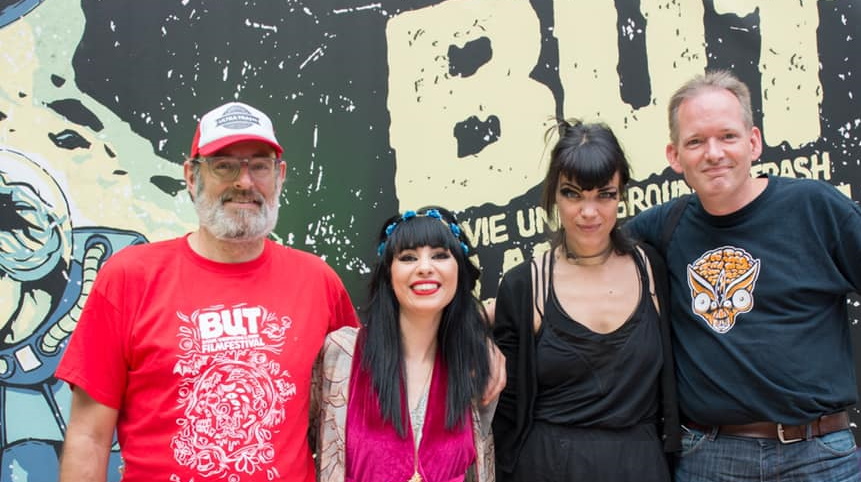 My regular three Dutch festivals each year are the International Film Festival Rotterdam, the Imagine Festival Amsterdam, and the Camera Japan Festival in Rotterdam.

This year I was invited to be in the jury of the B-Film, Underground and Trash Film Festival in Breda ("BUT-FF" in short), and I had such a blast there that I have no choice but to add it to the list of regulars. A fantastic location, a fantastic atmosphere, great people and fun films. What more could you possibly want?

A long time ago... I started dabbling in crowdfunding, getting my name attached on credits for a few bucks and such, pre-buying the odd special edition... but as with all things, escalation kicks in, and in 2016 I backed what I thought to be an incredible short: directing duo Seth Ickerman's Turbo Killer II: Blood Machines, a follow-up to the clip they made for Carpenter Brut's Turbo Killer.

There were delays (aren't there always, with projects like these?), but thankfully there also were some brilliant behind-the-scenes pictures. Also, the Ickerman boys were extending the short from 30 minutes to nearly an hour.

And in 2019, two full years after their initially proposed project end, we finally got to see what the duo had been working on all that time. And WHOA! It looks awesome. Because you can't have enough of a good thing, Seth Ickerman is now making it even longer and prepping it for a home release. But the version which played festivals in 2019 (now just called Blood Machines) was very impressive indeed. Colorful, trippy, unique, weird and sexy, this was a space opera worth the wait.

But don't just take my word for it: read Peter Martin's review! 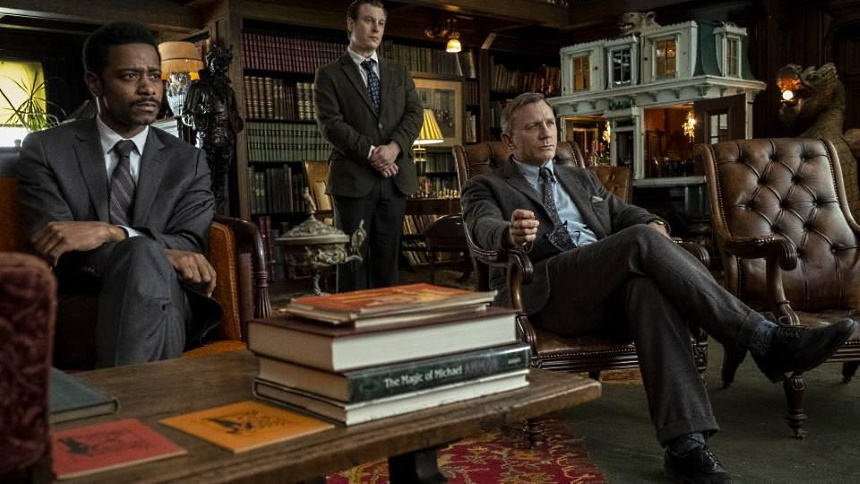 While i'm not the biggest fan of Agatha Christie, several adaptations of her works have earned a spot in my heart. Absolute champions, in my opinion, are the four Miss Marple films made in the 1960s by George Pollock, starring Margaret Rutherford. Glorious fun with a dark edge.

And it's exactly that tricky triple saddle-point between homage, caricature and awesomeness where Rian Johnson's Knives Out resides. Not an adaptation of an Agatha Christie novel, yet based on ALL of them, you can't help but think the people in front of the camera are having just as much fun as the audience watching them.

I do hope Rian Johnson and Daniel Craig make at least three more of these. Fingers crossed...

For J. J. Abrams, the Star Wars universe is just a place where weird shit happens, and where you can conjure entire armies out of nowhere at will, story or logic be damned.

I liked the new cast of the trilogy, and cared enough about them to want to see how it ends for them in The Rise of Skywalker. But apart from that, the only good feeling I got from watching this almost endless batch of fake massacres, was that this trilogy has now officially ended. 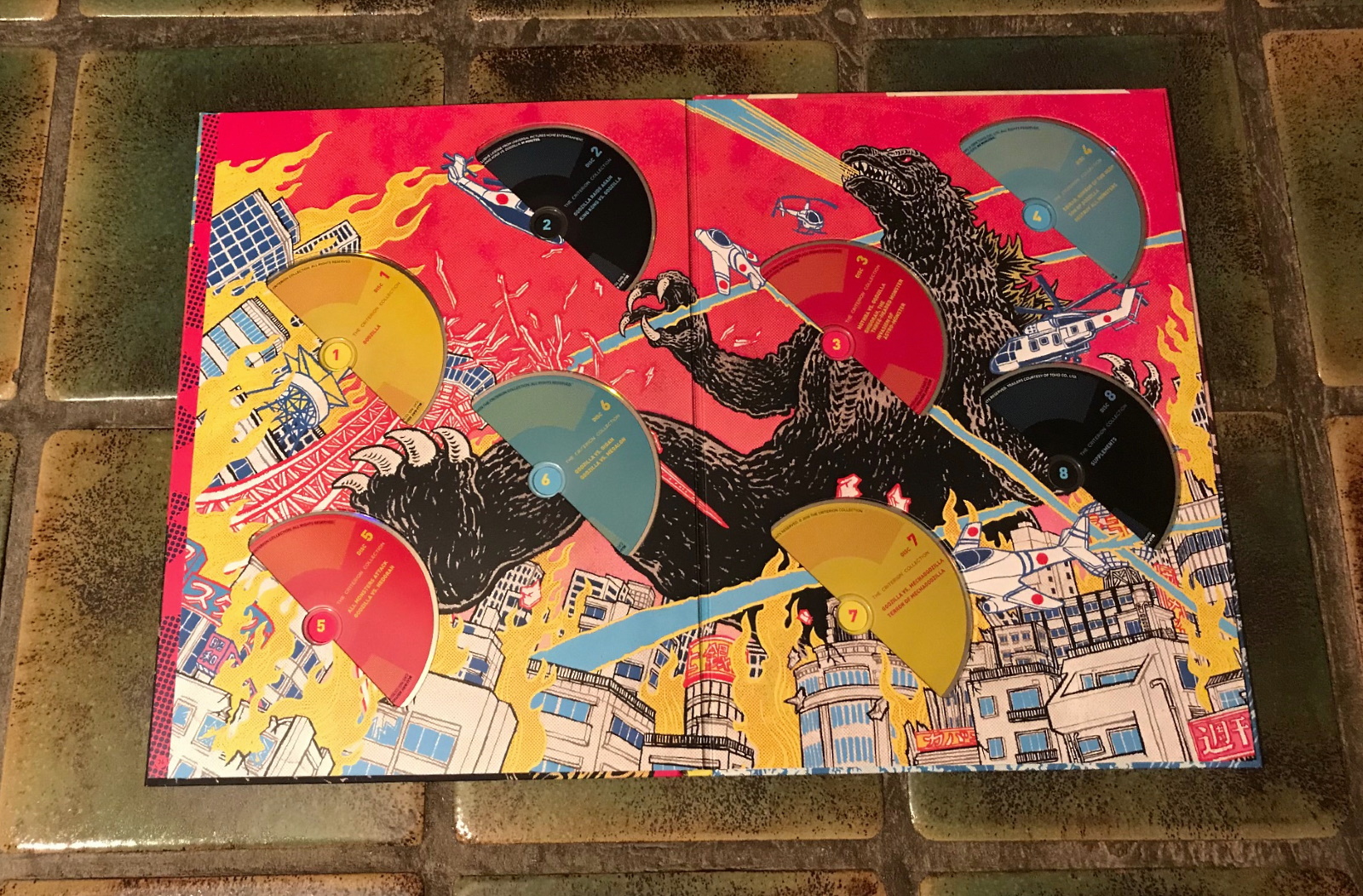 My favorite film-related acquisition was bound to be the insane Cowboy Bebop Ultimate set by Anime Limited... but truth be told, it got trumped several times over by even BETTER sets. The German Psycho boxset sure was psycho indeed, and Anime Limited gave Satoshi Kon's Perfect Blue their Ultimate Treatment too...

...and like last year, Criterion sweeps in at the end and steals the first prize. Celebrating their spine number 1000, Criterion released a boxset of the first 15 Godzilla films, and it basically smashed and destroyed all chances for the opposition.

I love this thing and feel free to take a closer look at it!

My favorite anime release last year was a compilation of delightful shorts by studio Production I.G., grouped here under the name of its most recent episode, Pigtails.

You can read my review and see why I'm crazy about this set. 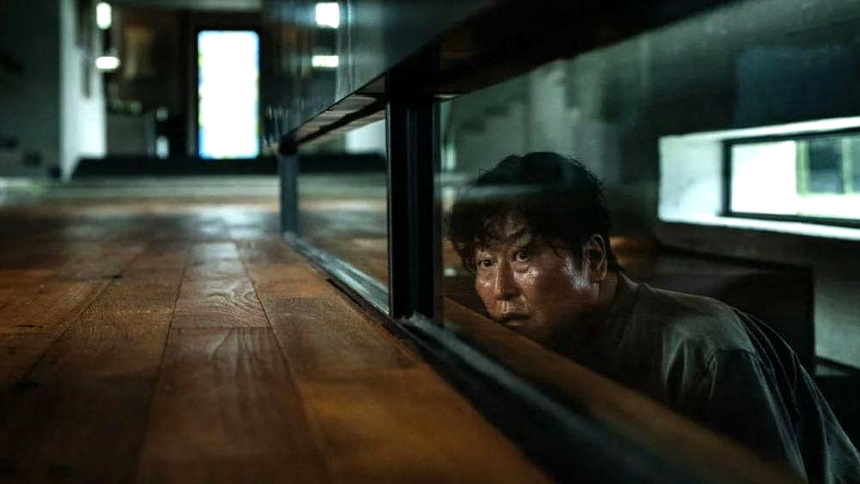 And last but not least: my favorite film of what little I saw of 2019 releases was Bong Joon Ho's Parasite. I don't mind getting on the bandwagon if something is this fantastic.

And that's all, folks!