Director Mattie Do exerts perfect precision over her story, in a film that warrants multiple viewings. 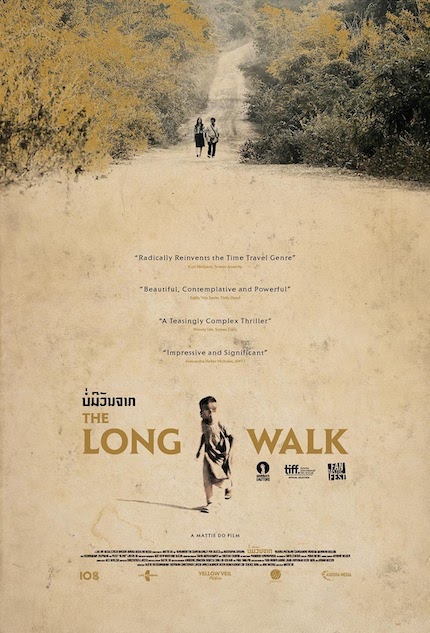 Many people dream of traveling back in time to certain events in their lives in the hopes of changing them, they believe for the better.

But what does it mean to travel back, and why do we always think of time as linear? Is this simply an outdated western concept, designed in part to stop people dwelling on injustices and pain and absolving others and themselves of the guilt of wrongdoings, or simply to enjoying the company of a lost loved one? What if they are always with us, not in a metaphorical memorial sense, but a literal one?

These are just a few of questions deeply and strangely pondered in Mattie Do’s third feature film, The Long Walk. As with her previous films, Chanthaly and Dearest Sister, Do is concerned with philosophies of time, connection, memory, and loss. As quietly beautiful as it is subtly disturbing, The Long Walk puts a new spin on time travel, one that eschews any occidental notion of control and destiny, and instead reminds us that time is not a line, but a constant movement in a elliptical motion that constantly overlaps.

In the near future, outside Vientiane, an Old Man (Yannawoutthi Chantalungsy) lives a meagre existence, living in his family’s old run-down shack, and finding odd scrap metal and spare parts to sell for small sums that are just enough to keep him alive. He also has a ‘hobby’ of killing local old women; ones he sees himself as saving from lives of loneliness and pain.

He takes care to bury them in the same area, so their ghosts can keep each other company. He knows this, because for the last 50 years, he has been followed by the silent ghost of a young woman (Noutnapha Soydara) that died on this same road. As a boy (Por Silatsa), he found the woman and held her hand as she died, and she has followed him ever since.

The police, like many locals, know that the Old Man can see spirits; so when his latest victim’s daughter Lina (Vilouna Phetmany, who also starred in Dearest Sister) comes asking questions, they ask him to help her. He also discovers that the Ghost can take him back in time, to when his own mother died in great pain.

The Old Man then finds himself moving back and forth, speaking with his younger self about how to handle the impending death, and even attempting to make it easier for his mother. But as he quickly learns, time doesn’t work that way, the past is malleable in ways even he cannot understand.

But what does it change? And does one small change to the past render the future better or worse? For suddenly, there is a woman held prisoner, more ghosts are appearing, and each time the Old Man makes a journey to right the ‘wrongs’ of the past, the future shifts and he can no longer even recognize himself.
Each time he picks at a thread of this tapestry of time, it begins to unravel into a knotted mess at his feet, for his supposed altruism is selfishness in disguise at best, and monstrous at its clearly worst. His lifelong willfull isolation from the living around him has left him a shell, and each time he returns to the ‘present’, those shifts are seen in covert and overt ways, until he no longers knows when he is existing, or even if he still is.

Mentally, emotionally, the Old Man remains stuck in the moment of his mother’s death, where as a boy he was unable to help ease her pain, and his father abandoned them. His life may have continued in the linear way that we expect, but is caught in this circle through the murders he commits, trying to make up for his lack of foresight. That is, until he able to go into the past via the ghost. But will it truly help?

This is not Star-Trek or Source Code-style time travel in which changing the past changes the future for the better, or will save some version of humanity. What’s done cannot be undone, or at least, what might be changed brings you back to that same circle, with subtle changes that may do nothing but bring you further into a lonely darkness.

Do perfectly captures the futuristic elements in a few select shots: At the beginning and the end, we see skyscapers in the distance, near enough to be tangible, but far enough away to be a dream never realized. All citizens have a chip embedded under their skin to make and receive payments (though of course this is also to keep track of citizens). So certain technologies are given to all, others are held back. In what seems at first to be a minor scene, but one which reflects this, the boy’s family receives unneeded solar panels from a self-important NGO, rather than the farming equipment which would mean the family wouldn’t be at constant risk of starvation.

Do exerts perfect precision over her story, which is reflected in her collaboration with her crew, especially an ambitious yet haunting script by Christopher Larsen, cinematography by Matthew Macar that shows both the beauty and wildness of the Laotian countryside, and excellent editing by Zohar Michel that gives us clues like breadcrumbs in the trail. Do pulls this all together, knowing when the audience needs time to contemplate and absorb, taking us on the walk without rushing, allowing us to explore and understand the story at a steady pace, with a steady hand at the wheel.

The Long Walk does not reveal its mysteries easily, and its elliptical concept of time transfers to a narrative that asks its audience to question how we perceive storytelling, and the truths behind it, as how we understand the past as linear and fixed, in that it is not. With a non-professional cast who are nonetheless remarkable, The Long Walk is a film that warrants multiple viewings, revealing its mysteries over its imprecise yet neverending circle of time.

(Full disclosure: ScreenAnarchy founder Todd Brown is one of the producers of this film. This had no bearing on the review; he was not involved with the editing or writing.)

Review originally published during the Toronto International Film Festival in September 2019. The Long Walk opens in U.S. movie theaters, on Digital and On Demand on Friday, February 18. Visit the official site for more information.