Ard Vijn
Editor, Europe; Rotterdam, The Netherlands (@ardvark23)
1
Sign-In to Vote
Tweet Post Submit
Last week, Scottish distributor Anime Limited released a collection of animated shorts by Japanese studio Production I.G. on Blu-ray (and DVD). All of them are presented in the original Japanese soundtrack with English subtitles, and all of them are good. There, this could be the shortest review ever.

Thing is, in my opinion this set warrants a bit more attention than that. Too often we see great shorts like these at festivals, or plunked in front of a larger movie, and then never are able to see them again, unless released for free (or pirated) on YouTube. It's a bit surprising in this day and age. Streaming platforms like Netflix are all the rage now, and much of the output found there isn't limited to the tried-and-trusted lengths of old-fashioned television and cinemas. Some stories just work better as a short than as a 90-minute film, but even with these new platforms on the market it is hard to translate most shorts into commercial successes.

That's why I'm very happy with this compilation's release. Each of these shorts would not be able to get a special edition by themselves, but together they got quite the treatment. In its Collector's Edition, Anime Limited has nicely included books with art and explanations for all shorts, and you can see pictures of that release in my Pretty Packaging article of last week. Those books are helpful too, as the discs only have the trailers as extras on them, but for those who do not need any extras there will also be a cheaper standard release later this month.

Extras or not, what about the shorts themselves? Below are a series of mini-reviews for each short in the compilation, and you can click on the edge of the pictures to scroll through all five of them. 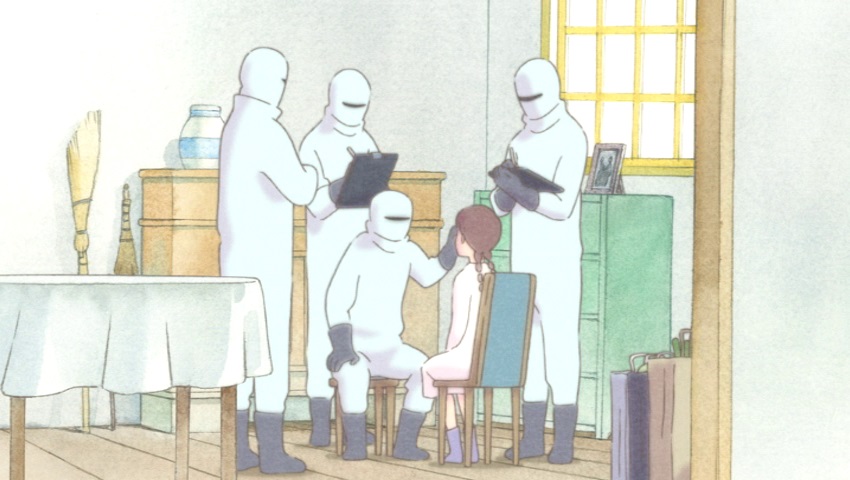 Winning literally dozens of awards worldwide, Pigtails marks the directorial debut of animator Itazu Yoshimi, who earlier collaborated with Kon Satoshi on Paranoia Agent and Paprika (and who was slated to finish Kon's in-progress The Dreaming Machine, before that project was unfortunately abandoned).

A melancholy story told in pastels, in Pigtails you follow a young girl living alone in a nice cottage. But why do her surroundings resemble a wasteland? And who are the masked strangers who do medical check-ups on her, and who make sure she has everything she needs?

The answers may not be too surprising, and Itazu thankfully doesn't work towards a giant reveal which explains everything as the climax of his story. Instead, he shows an impressive focus on tiny details and the characters' emotions, and allows for the emotional delivery to arrive all by itself. And ooh boy, does it arrive... 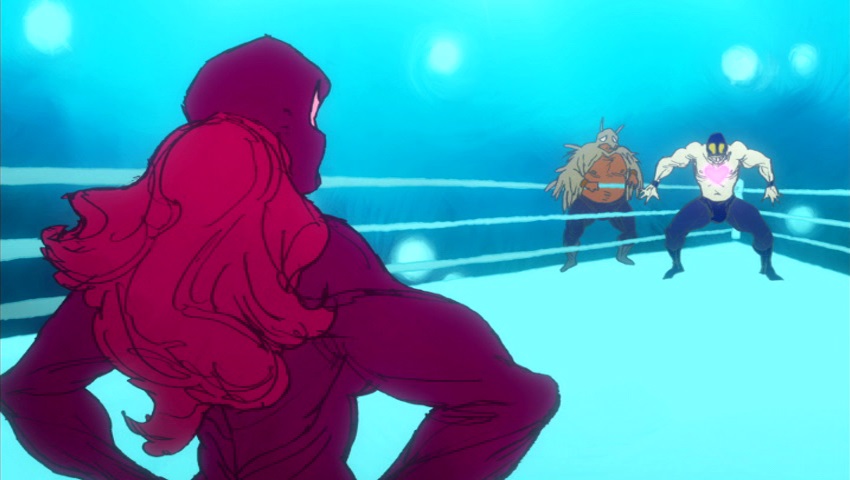 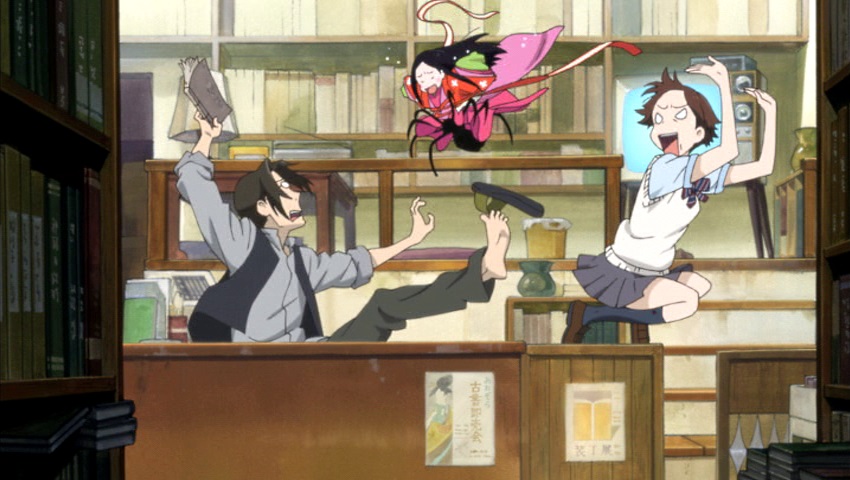 As a freelancing artist, Kaiya Toshihisa has contributed to a wide variety of films and series, ranging from Roujin-Z to MindGame, but to my knowledge this short is the only thing he did where he is actually credited as director.

And I'm wondering if we are not missing out on him directing more often, as Li'l Spider Girl is a delight. In it, a book antiquarian and his student assistant accidentally release a mythical creature, magically locked in an old book. Half girl, half spider, the thing is both cute and dangerous, so the two decide to try and return it to its mother... a legendary monster who may be of Godzilla-like proportions, if the stories are true...

In its short running time, the film effortlessly switches between several genres, including comedy, history epic, fantasy and horror, and the animation is very easy on the eyes. 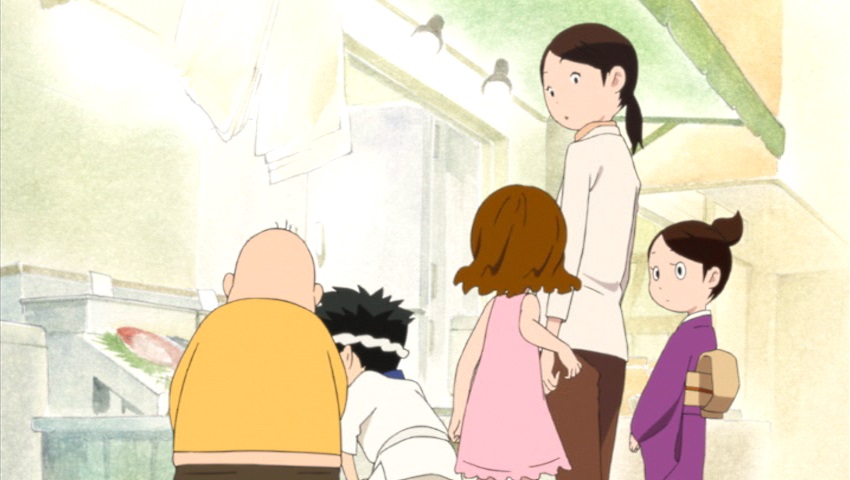 Know primarily as a designer and animation supervisor, Kise Kazuchika has worked with Oshii Mamoru on his films Patlabor, Patlabor 2 and (the original 1995 anime of) Ghost in the Shell, among many other science fiction epics including Neon Genesis Evangelion: Death & Rebirth and Blood: the Last Vampire.

It is therefore a bit surprising that for his directorial debut he made Drawer Hobs, a cute little sedate tale in pastel colors about a young woman who seems stuck in her daily routine. Her life changes when a cupboard arrives, an old family heirloom. As she finds out, small elf-like people live in the piece of furniture, and they push her towards taking better care of herself. 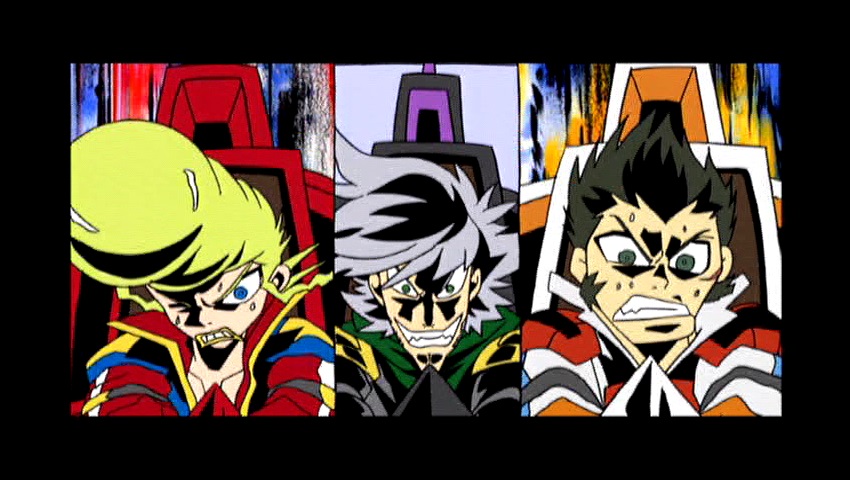 Anyone who has seen Dead Leaves will know how manic Imaishi Hiroyuki can get when the mood strikes him. I'm in awe of the man and his creative drive: when he has an idea, he goes for it full tilt boogie. His Gurren Lagann was an exercise in escalation, while his Panty and Stocking with Garterbelt and Kill la Kill show that no concept seems too crazy for him.

Rarely seen, Oval x Over is itself a compilation of three shorts, all exclusively made for a racing event in Japan and never released afterwards. Filmed in the style of Dead Leaves it is a crazy, manic and fun attack on the senses, in which three racers try and beat each other while struggling with their own traumas. Typical Imaishi Hiroyuki, and over before you know it.