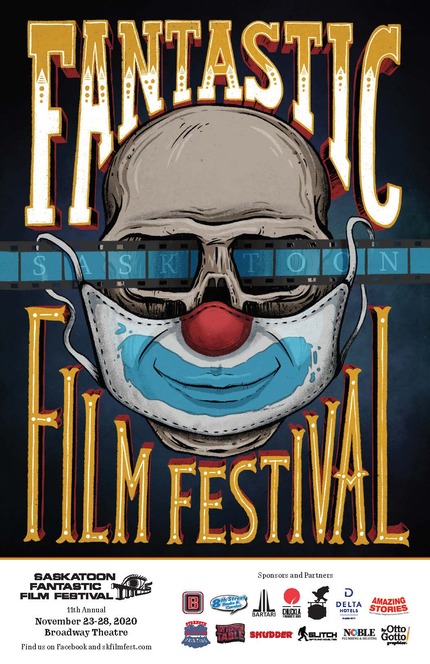 In late November, many of us will be looking towards the Canadian prairies with great envy. Not only will the Saskatoon Fantastic Film Festival be featuring a terrific line-up of films, they will be happening live in the theatre. Being one of the few parts of North American were virus rates are not high, the festival will still be operating at a reduced capacity. But it is happening nonetheless, and as usual, the team has pulled off a kick-ass programme (full disclosure: our own Andrew Mack is one of the programmers, and we like his taste).

Several films here have already graced our review pages, including Jumbo, Violation, Get the Hell Out, and Black Bear. There's shorts and features, Canadian and International content, and a chat with veteran producer Michael Peterson. All in all, this festival's fans are in for a rare treat this particular year. Full details in the press release below.

The Saskatoon Fantastic Film Festival, Saskatchewan’s largest feature film festival, returns for its 11th edition at the Broadway Theatre on November 23-28, and will bring the best in international independent cinema to Saskatoon.

“We heard from our fans that they want to have the theater experience again, but safety is of course our number one priority this year,” said festival director and founder John Allison. “All of the movies will be in the Broadway Theatre again this year, but extra precautions are being taken to ensure everyone has a safe and happy festival experience.”

The Broadway Theater will be reduced to one-third capacity for seating and moviegoers will choose their seats from a venue chart. The festival will show fewer movies this year to accommodate extra cleaning time in the theatre. Sanitizer will be on-hand, social distancing will be enforced, and masks will be mandatory in the theatre, even while viewing the movies.

“With all that in place, we have some exciting events this year,” adds Allison. “On Monday we’ll have a secret screening. Tuesday is our punk rock night. On Wednesday we’ll feature a block of ‘elemental’ short films. Thursday night we’re having a double feature by Canadian director Amelia Moses, and Michael Peterson, a Canadian film producer, will be here in person for a film workshop that day too. Friday night we’ve added a midnight screening to the lineup and on Saturday we have a real variety of incredible movies all day long.”

This year’s festival features over 35 feature length and short films from around the world. For information on the full film lineup and festival passes, visit www.skfilmfest.com

Siblings Mimi and Luke unwittingly resurrect an ancient alien overlord. Using a magical amulet, they force the monster to obey their childish whims, and accidentally attract a rogues’ gallery of intergalactic assassins to small-town suburbia.

Saskatoon Fantastic Film Festival is running its first ever Secret Screening. Viewers will be one of the first people in Canada to see this wicked fun movie

An on-the-lam punk rocker and a young woman obsessed with his band go on a series of misadventures together through the decaying suburbs of the American Midwest.

When the punk-rock band DUH finds themselves on their first tour with a man-eating hillbilly for a roadie, the “gig life” is paved with nightmares and half-eaten bodies.

An entertaining collection of short films from around the world featuring themes of fire, earth, air and water.

A suburban woman fights to be believed as she finds herself stalked by a threatening figure who returns to her house night after night. When she can’t get help from those around her, she is forced to take matters into her own hands.

Cut off from civilization, a single mother puts her children on high alert when they bring home a young girl caked in clay. She tells of spirits and spirit hunters, but these are not mere superstitions.

During a winter getaway at an isolated cabin, a self-destructive young woman becomes convinced that her best friend is stealing her blood.

Grey, an indie singer, whose first album was a smash hit, gets an invitation to work with a notorious record producer at his remote studio in the woods. But as Grey’s work progresses, the vegan singer begins to hunger for flesh.

Jeanne, a shy young woman, works at night in an amusement park and her life lights up when the park acquires a new thrill ride, the extraordinary and majestic Jumbo. It’s love at first sight.

Dwight and Jessie struggle to keep their sickly younger brother alive, but to do so they must feed him human blood.

Midnight: Get The Hell Out

A zombie virus is spreading inside the Taiwan Parliament, but Wang You-Wei, aka Mr. Nose Bleeding, is immune to the virus due to his bleeding disorder. He must lead the mission to “get the hell out” of Parliament.

The quantum computing revolution has begun, but building the network requires miles of infrastructure to be laid between huge magnetic cubes by “cablers”--unprotected gig workers who compete against robots to pull the wires.

At a remote lake house, a filmmaker plays a calculated game of desire and jealousy in the pursuit of a work of art that blurs the boundaries between autobiography and invention.

A troubled woman on the edge of divorce returns home to her younger sister after years apart. But when her sister and brother-in-law betray her trust, she embarks on a vicious crusade of revenge.

Three childhood Kung Fu prodigies have grown into washed-up, middle-aged men--now one kick away from pulling their hamstrings. But when their master is murdered, they must juggle their dead-end jobs, dad duties, and overcome old grudges to avenge his death.

A man with a mysterious past flees the country to escape his own personal hell--only to arrive somewhere much, much, much worse.

More about Bleed With Me