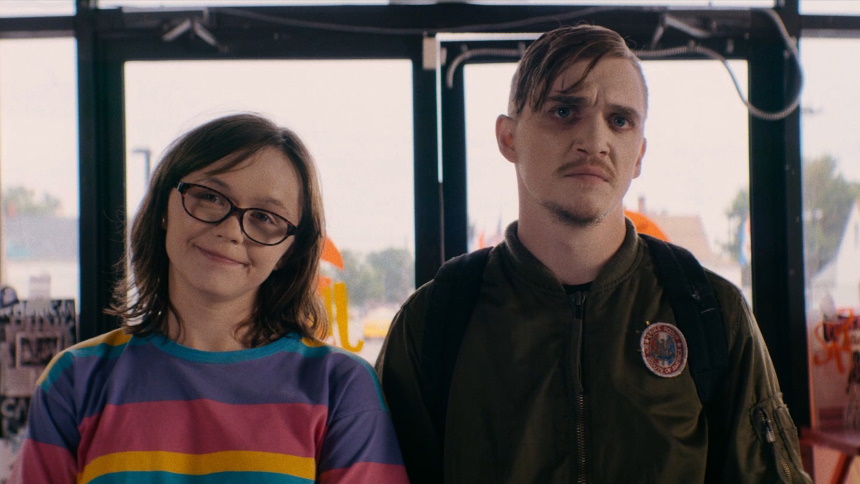 When rough and tumble mysterious stranger Simon (Kyle Gallner) crosses paths with the socially awkward Patty (Emily Skeggs), they form an unusual bond that sends them careening toward chaos, and loving every minute of it in Adam Rehmeier's Sundance breakout feature, Dinner in America.

We meet Simon in the process of getting kicked out of a pharmaceutical study, after which he promptly hooks up with a fellow drug study exile, heading back to her place for one of the most uncomfortable family dinners ever. When Simon's meal ticket's mother (in a wonderful brief appearance from '80s heartthrob, Lea Thompson) comes onto him, the whole family explodes and chases him out. Not the silent type, Simon takes off, but not without leaving a trail of flames behind him, which catches the eye of the local cops, and now he's on the lam.

Patty, meanwhile, is busy getting fired from a shitty pet store job, and stumbles onto Simon on her way out the door. There's an immediate awkward connection between the two that neither can really explain or understand, but it soon gets very strange when Patty discloses that she's a huge fan of local punk band, Psy Ops, and specifically their masked and anonymous singer, John Q, who happens to be Simon's secret identity. Patty tells Simon that his band has signed on to open for an up and coming corporate alternative band, which he does not take well. It's against his punk ethos, so he tracks down the rest of his band to have words.

While the ultimate goal of Dinner in America, named for Psy Ops signature tune, is to follow Simon as he attempts to torpedo his bandmate caviar dreams, it takes a delightfully circuitous route, resulting in a crudely sweet romance along the lines of a gutter punk Heathers. Simon teaches Patty to take care of herself and helps her get revenge on a pair of suspiciously chummy jocks who enjoying tormenting her, while Patty helps Simon embrace his own softer side through her own trusting and naive nature. The result is a perfect storm of sweet and sour that attacks the meet cute tropes with a boisterous punk vigor.

When I started reading up on the film before watching it, director Adam Rehmeier's name seemed familiar, and it quickly came to me that this was the man behind the controversial torture film, The Bunny Game. That previous work was essentially a performance art piece co-written by Rodleen Getsic who stars as a prostitute who gets picked up and bound in the back of a box truck to be tortured for the length of the film. It's a brutal film, initially banned by the BBFC in the UK, that is more of an endurance trial than anything else, which is why Dinner in America is such a startling surprise. It takes anarchic spirit of The Bunny Game and focuses it into a genuinely warm film with characters who feel like they could exist at opposite ends of each other’s worlds.

Rehmeier's new film is all heart under its crude exterior, he loves these characters, and so do we. An odd couple who leave a trail of righteous destruction in their very loud wake, Simon and Patty are a sweet pair who complement each other in all the right ways while still managing to sand off each other's rougher edges. Gallner and Skeggs turn in perfect performances in their roles, and with solid cameos from the likes of Thompson, Pat Healy, Mary Lynn Raskjub, and David Yow, this cast supports them and Rehmeier more than ably. Dinner in America is the most heartwarming film I've seen this year that features smocks covered in cat-shit, dirty Polaroids, and arson, and if you know me, that's saying something.