Rape revenge films are a fraught bunch; while some seem to seek only to exploit an inappropriate titillation stirred in more lascivious audiences, others take a more nuanced look into the psychology of this very specific kind of trauma.

The most successful are able to tap both into the pain and the catharsis of acting out violent revenge, while still maintaining a perspective with which people can relate, if not necessarily empathize with. Madeleine Sims-Fewer and Dusty Mancinelli have plumbed the depths of sexual violence in a number of shorts over the last few years, but never with such meticulous acuity as in their debut feature, Violation.

A pair of sisters and their husbands strike out into the woods for a restorative holiday in this film that isn't exactly what it seems at first. Miriam (Sims-Fewer) is fighting a losing battle to revitalize her marriage to her inattentive husband Caleb (Obi Abili), while sister Greta (Anna Maguire) and her outsider husband, Dylan (Jesse LaVercombe), seem to be living the life Miriam dreams of. Childhood reminiscences keep their interactions jovial for a time, but when Miriam and Caleb become visibly antagonistic, jealousies arise and cracks start to form between each of the quartet.

One night by the fire, after Greta goes off to bed, a line is crossed between Miriam and Dylan that cannot be uncrossed and things go downhill from there. What was once an uncomfortable silence between two sisters attempting to regain a sense of camaraderie they'd lost becomes deafening in the wake of this new trauma, and Miriam sees no way out but through the pain. And so she goes.

With their previous writing and directorial work, Sims-Fewer and Mancinelli have explored the trauma of sexual assault several times, most recently with Fantasia alum, Woman in Stall. In that film, a woman played by Sims-Fewer is unrelentingly harassed in a public restroom stall by a man making no overt sexual suggestions, but rather refusing to acknowledge her dismissal of his "nice guy" advances. Violation takes that concept -- of a man for whom consent is an effusive concept -- to a brutal extreme, and the lengths to which Miriam is forced to go to assuage her own trauma which everyone around her seems unwilling to accept.

Some figures show that upwards of 90% of rapes go unreported by victims for any number of reasons. The poor ratio of reports to convictions, the fear of retaliation, an arcane stigma of a woman tainted by aberrant sex all figure into these numbers, and if she isn't able to exact legitimate legal justice, what is she to do? Almost every woman I know has told me that they've been sexually assaulted at some time in their life, often more than once, but most of them have chosen to move forward rather than looking back. Many find solace in the support of their friends and peers, therapists, sympathetic clergy, understanding partners and others, who have helped them regain a sense of control. However, what if all of those avenues fail? Even worse, what if beyond simply ignoring their cries for help, those people refuse to acknowledge or refute their claims of trauma? What then?

Violation takes a hard look at one alternative, vengeance. But this isn't a Ms. 45 styled psychotic break, it's not an I Spit on Your Grave-esque disassociative violent spree, nor is it a sudden spate of vigilantism a la The Brave One or A Vigilante. Miriam's vengeance is more an attempt to erase the traumatic scar from her soul by reversing it; she absorbed the pain, and now she is intent on refocusing it on its source.

One act of violence is repaid with another, vengeance compounded by time, denial, silence, accusations, gas-lighting, and disbelief. Miriam is focused, calm, prepared; that is, until it all becomes real, at which point the brutality of the violence committed upon not only her body but also her psyche is reflected outward in a series of harrowing sequences designed to horrify. The audience isn't the only one scarred, though; revenge is a nasty business, and Miriam gets more than she bargained for.

Cinematographer Adam Crosby's camera is clearly guided by the writer's hands as it explores the haze between consciousness and oblivion during traumatic experiences. In the most sensitive moments, we switch from a typically omniscient camera to Miriam's point of view, reminding us that there is a woman behind these actions, who, in spite of her intricate plan, is still subject to the fears and hesitation that come with such violence. Shots from different points in the film repeat themselves, gaining fresh meaning as the full arc of the story becomes clearly, bodies once thought dead are now -- even worse -- disassociating from the present violence being visited upon them. It's truly astonishing, haunting work.

Equally effective is the use of sound in Violation. Beyond the score, which is minimal, the sound design brings us into the film in a way that is harrowing. Atonal drones signify shifting realities, temporal displacements, and Miriam's attempts to reconcile with her family and herself. Even more impressive than the non-diegetic soundscape is the way in which the film allows the sounds of struggle to speak for themselves. Long sequences of unscored violence punctuate the second half of the film, and the way the sounds of the moment drive home the purity of the pain and ugliness of revenge stick with me long after the credits have finished.

Violation is a film that is destined for dissection long after it has made its rounds, found an audience, and been rightly praised for its unflinching depiction of the cost of revenge. There are so many things I still have to say that risk my wandering into spoiler territory. The image of a man's erection, the very icon of male virility, being rendered powerless and ineffective, useless even, as part of a well-planned emasculation; the way Miriam attempts to regain control over her own sex by forcing herself upon her estranged husband, revisiting her own trauma but faced outward; and the steadfast way in which she enacts her scrupulously planned revenge; are all fertile grounds for dissection and discussion, but I cannot give away too much.

To call Violation a gut punch would be selling it short. The film is an exceptionally observant and well-rendered look at the deep psychic scars faced by women around the world who are constantly being told to deal with their own violation on their own time. It's a fever dream of revenge, a satisfyingly brutal and violent response to a culture that has groomed them to demure from conflict, a savage take down of the ways in which women have been bamboozled for centuries into believing that their pain isn't worth acknowledging. Violation is a tremendous film, an absolute stunner that is as horrifically gruesome as it is necessary, and I'll be thinking about it for a long time.

Review originally published in September 2020 during the Toronto International Film Festival. The film is now streaming on Shudder.

(Cick to embiggen photos below.) 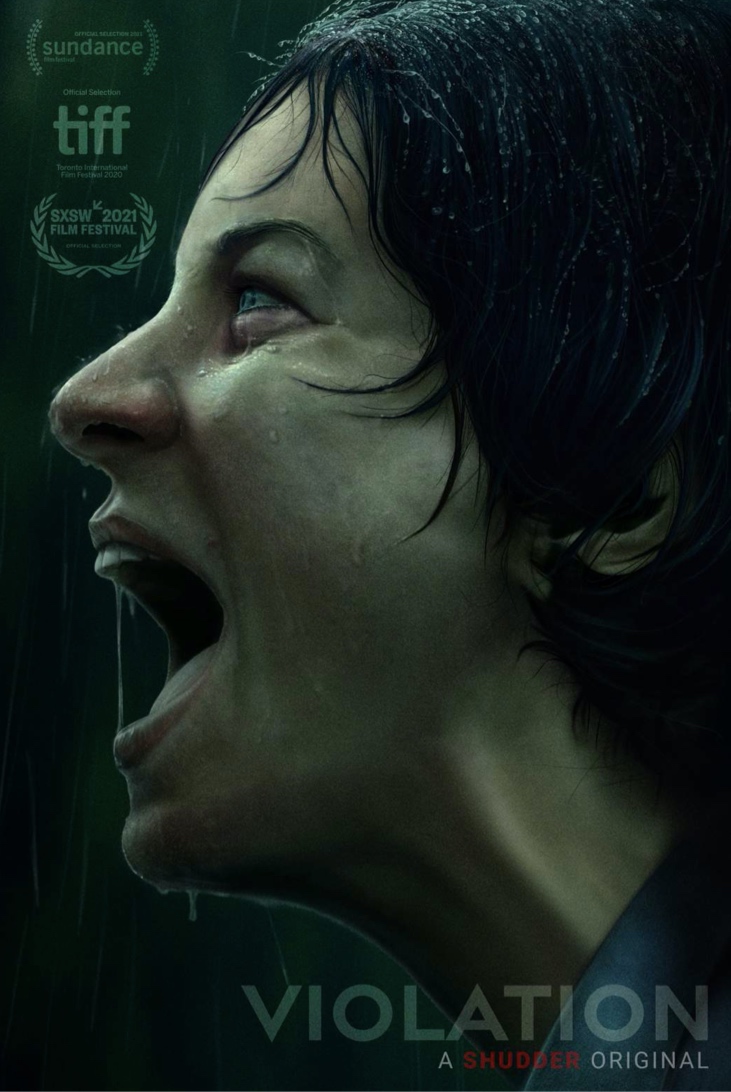 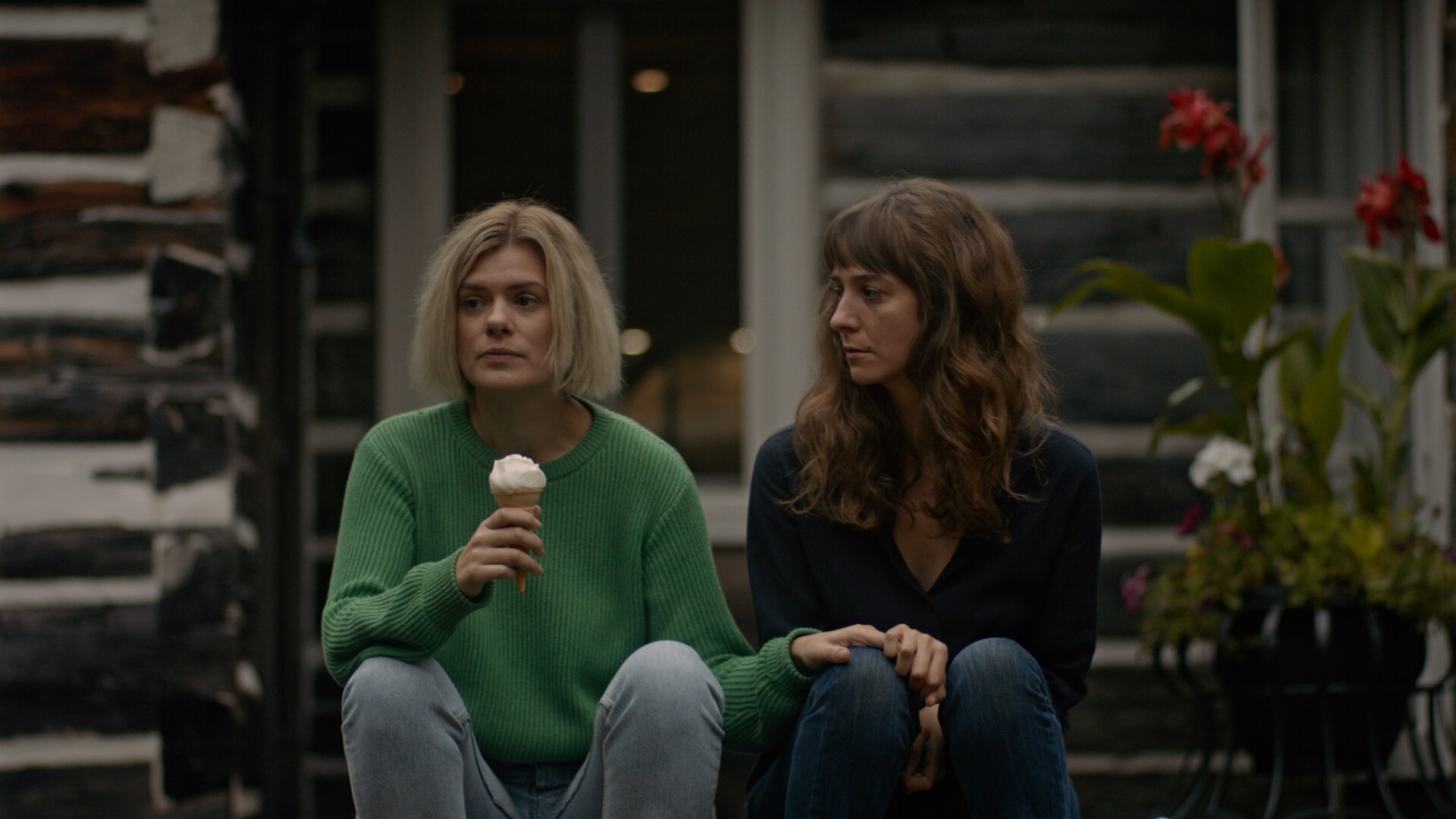