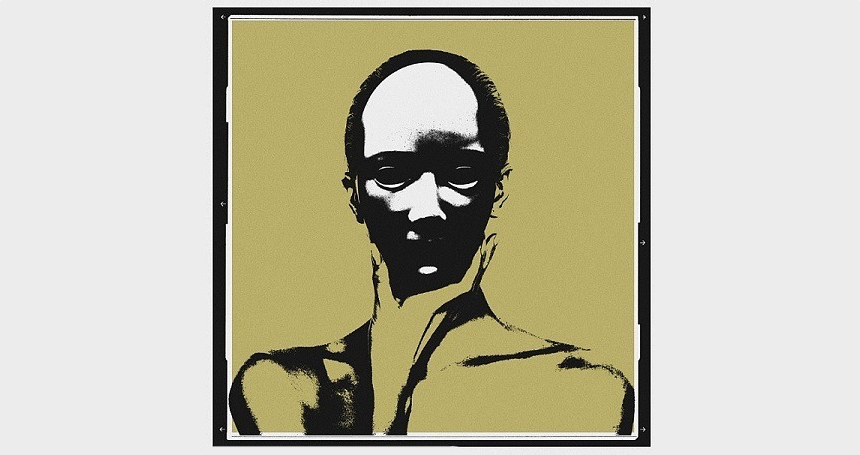 You may have noticed this week has been a big love-in on Canadian maestro, David Cronenberg, auteur of the horrors of the mind, and the flesh. His extensive (ahem!) body of work stretches back to the his short film work in the 1960s and his early 1970 feature film that shares the title of his current release, Crimes of the Future.

Below are many celebrations and variants of key art made by professional designers and fans to celebrate Mr. Cronenberg in all his forms, and while I do not have an alternate poster for every film (that would be too many) you will likely see your favourite entry of his canon in a new light. Let us be clear, that with only a few exceptions, the studio or original artwork to Mr. Cronenberg's films usually is far behind the vision and creativity shown on screen, and many who truly admire his work have given us the nightmare fuel poster designs that we deserve.

Let us begin with Aleksander Walijewski's modern Polish style take on The Fly, where a brilliant but eccentric scientist begins to transform into a giant man/fly hybrid after one of his teleportation experiments goes horribly wrong. 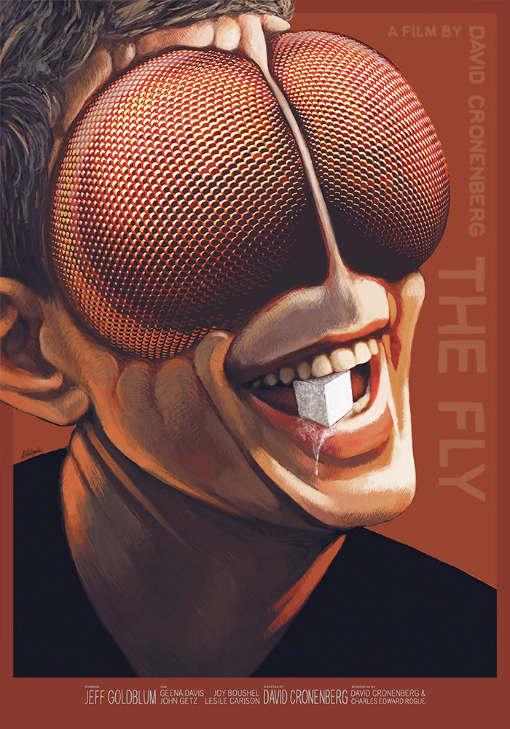 Moving backwards to Michael Ironside and spectacular cranium explosions, Scanners, where we have Pete Knight's line-art and grey matter take on the the dark thriller where “a scientist sends a man with extraordinary psychic powers to hunt others like him.” 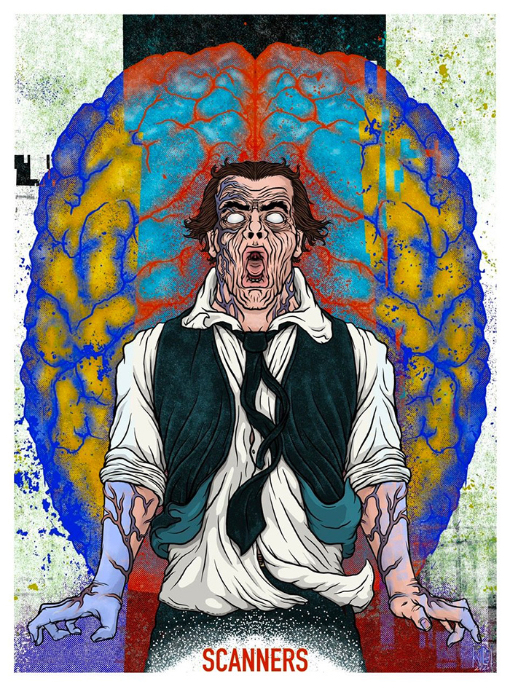 And then there is the juicy and creepy Oliver Reed and Samantha Eggar starring marriage breakdown and devil spawn drama, The Brood, with Mondo's artist Sam Wolfe Connelly. "A man tries to uncover an unconventional psychologist's therapy techniques on his institutionalized wife, amidst a series of brutal murders." 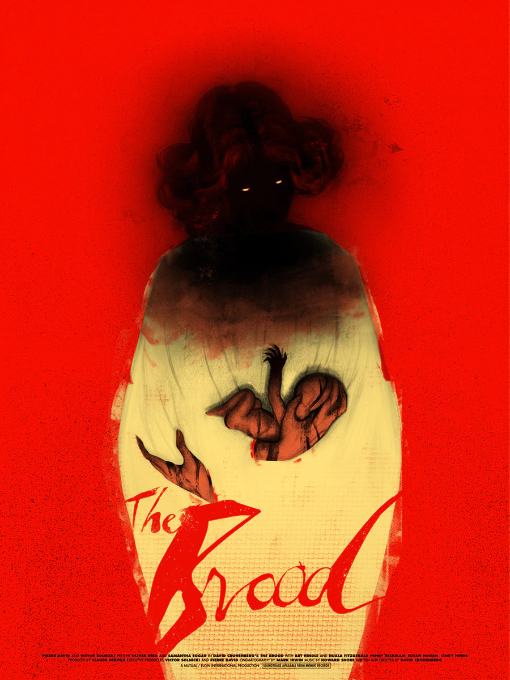 This Japanese design, for his adaption of William S. Burrough's Naked Lunch, was illustrated by legendary artist Hajime Sorayama. Focus on the sex and the bugs and the negative space and the touch-type. "After developing an addiction to the substance he uses to kill bugs, an exterminator accidentally kills his wife, and becomes involved in a secret government plot being orchestrated by giant bugs in a port town in North Africa." 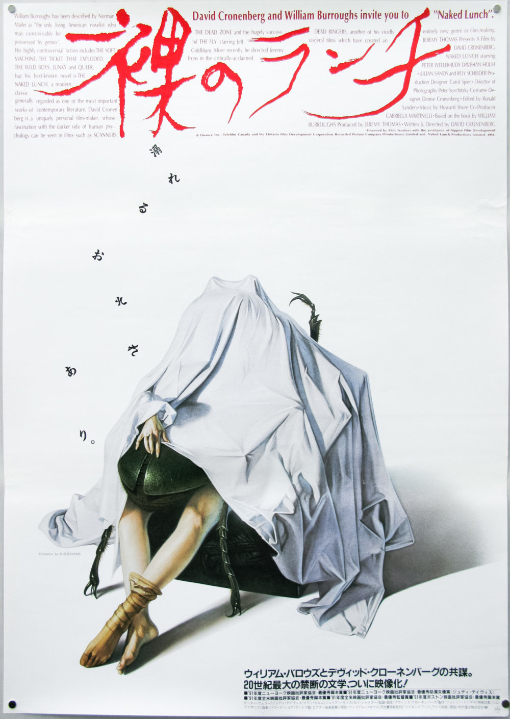 And this fan art for the very controversial adaptation of J.G. Ballard's Crash, from an unknown designer and illustrator using a key image from other key art, namely Patricia Arquette's leg brace and fish-net stockings (and scars from pervious car accidents), as well as the many "400 series" highways of Ontario, where the film is set, which run between her legs. "After getting into a serious car accident, a TV director discovers an underground sub-culture of scarred, omnisexual car-crash victims who use car accidents and the raw sexual energy they produce to try to rejuvenate his sex life with his wife." 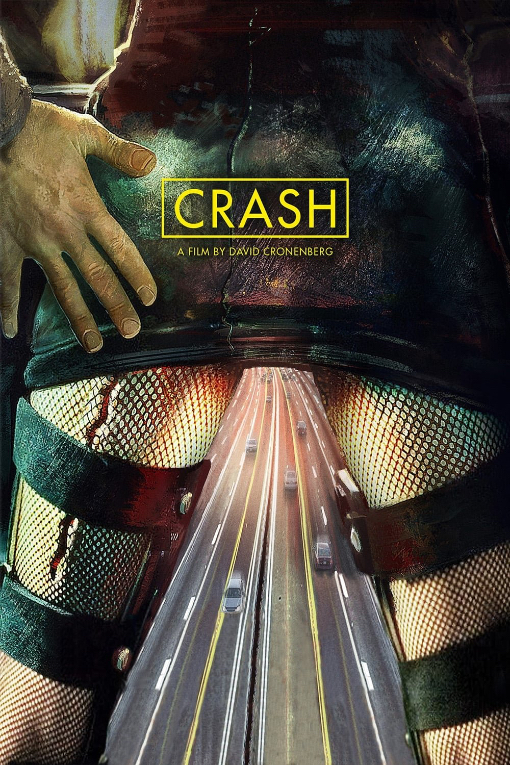 And a French poster for psychological 'Talking Cure' drama, A Dangerous Method is not unlike the main key art, but it does the 'overlap' of the three central figures to put them into both a Venn style diagram or a mental link and it does so in photographic black & white. "A look at how the intense relationship between Carl Jung and Sigmund Freud gives birth to psychoanalysis." 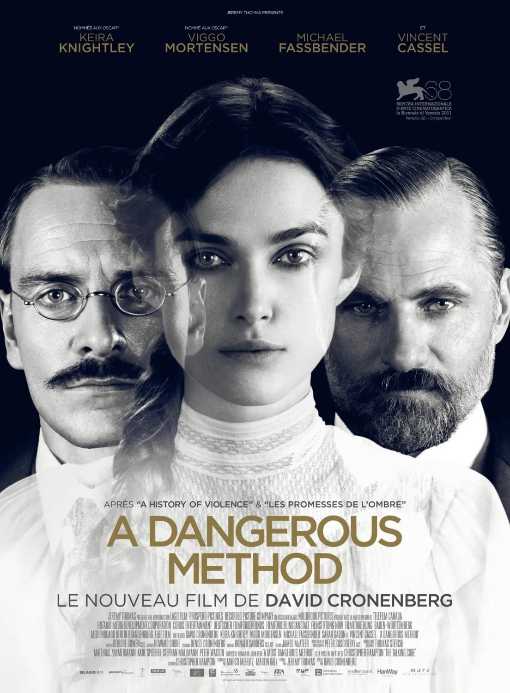 Another Polish style poster from artist Marta Szmyd, on the deeply sublimated horrors of separated twins and gynecologists played by Jeremy Irons in a fabulous dual role in Dead Ringers. "Twin gynecologists take full advantage of the fact that nobody can tell them apart, until their relationship begins to deteriorate over a woman." Note the vaginal imagery in the poster below, it will be seen again further down. 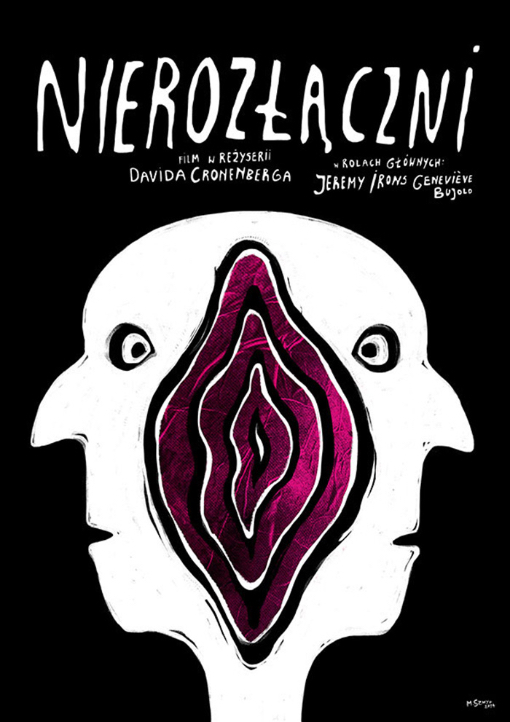 Cronenberg's second collaboration with Jeremy Irons (third if you count the two performances in the above) was based on the play of the same name, and written by the author of the play David Henry Hwang. M. Butterfly is the film that most Cronenberg fans forget he made becuase it is the further afar from his usual themes, and is the director is, perhaps, at his most restrained.  "In 1960s China, French diplomat Rene Gallimard falls in love with an opera singer, Song Liling."  This beautiful poster, with Irons in mascara, makes wonderful use of both a costume-changing screen and patterend wallpaper, is from an unknown designer. 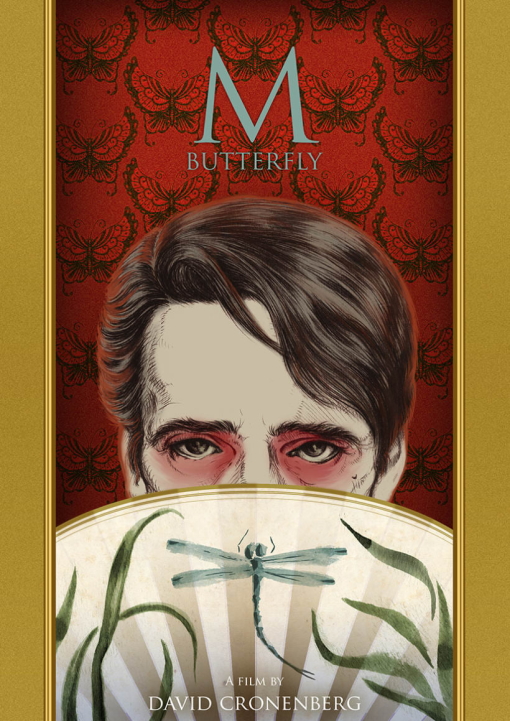 Next we have this fabulously strange photo collage for Shivers, aka They Came From Within, from German designer, Silver Ferox. "The residents of a suburban high-rise apartment building are being infected by a strain of parasites that turn them into mindless, sex-crazed fiends out to infect others by the slightest sexual contact." 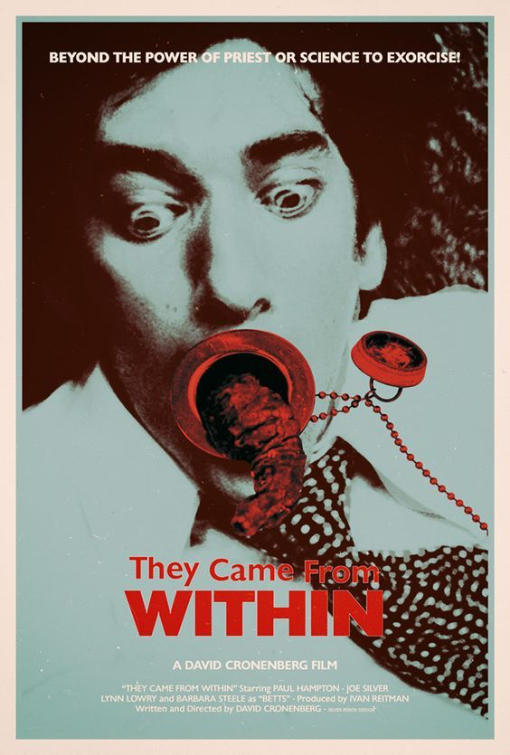 And this comic book cover illustration by Brazilian illustrator Guilherme Fernandes, for the Christopher Walken starring adaptation of the Stephen King novel, The Dead Zone."A man awakens from a coma to discover he has a psychic ability." 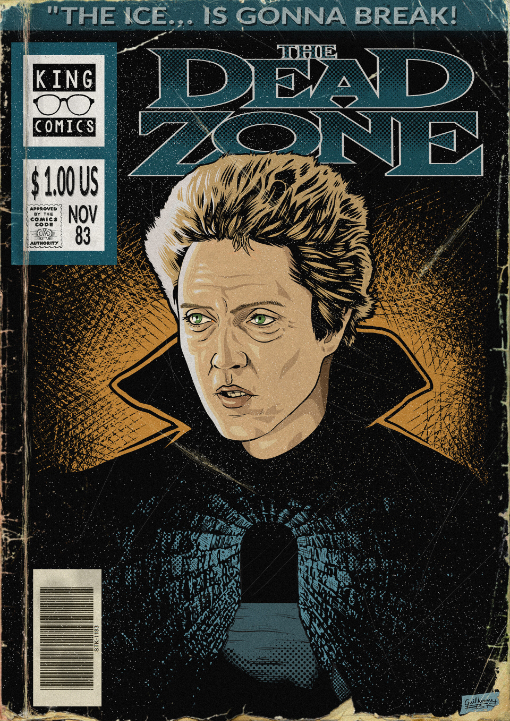 There was never any good key art for the Virtual Reality quasi-sequel, eXistenZ, but Japan delivers this wonderful commercial release poster (designer unknown).  "A game designer on the run from assassins must play her latest virtual reality creation with a marketing trainee to determine if the game has been damaged." 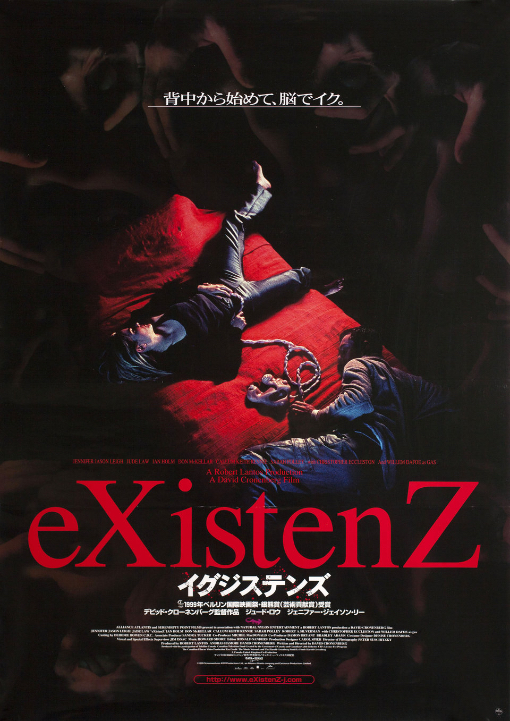 And lastly, we have one of Cronenberg's Signature works, worthy of two Alternate posters, the first is from Agustin R. Michel, here featuring the interlace lines, and a woman's lips turned sideways to evoke vaginal space (with teeth). It also serves as the sleeve of a VHS tape, a medium critical to the era in which the film came out, an illicit media traded upon its magnetic tape. 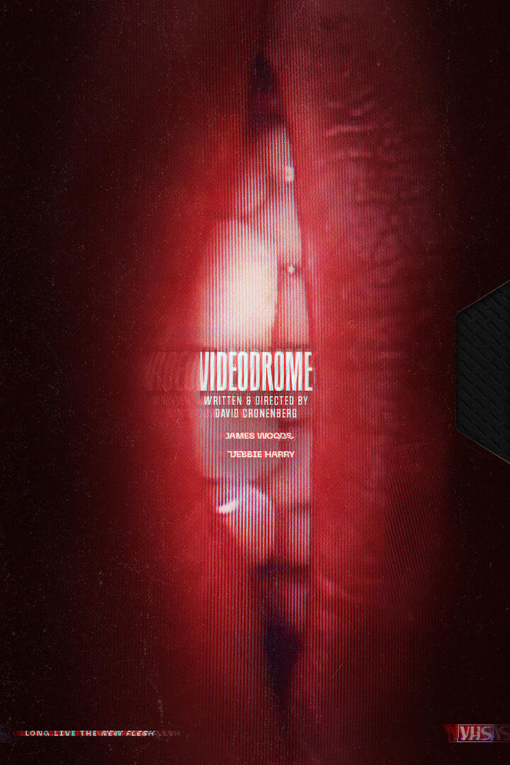 And the other Videodrome alternate key art from Adam Juresko, an illustrator/designer who frequently does event posters for Toronto's Revue Cinema.  "A programmer at a TV station that specializes in adult entertainment searches for the producers of a dangerous and bizarre broadcast." 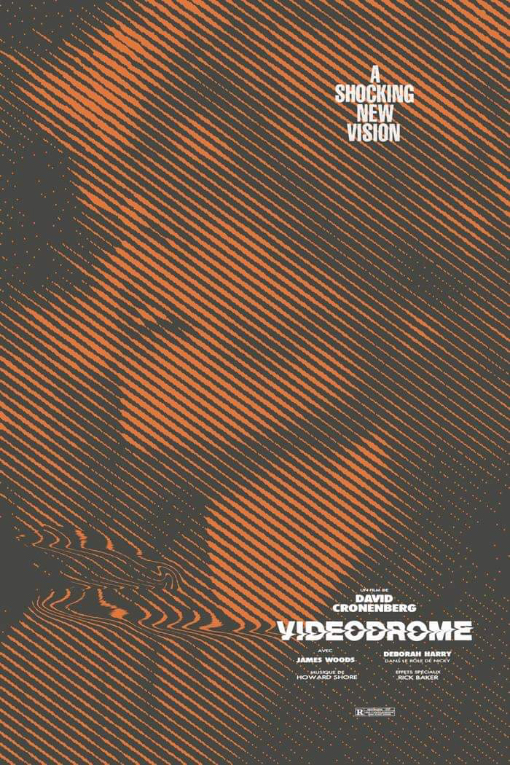