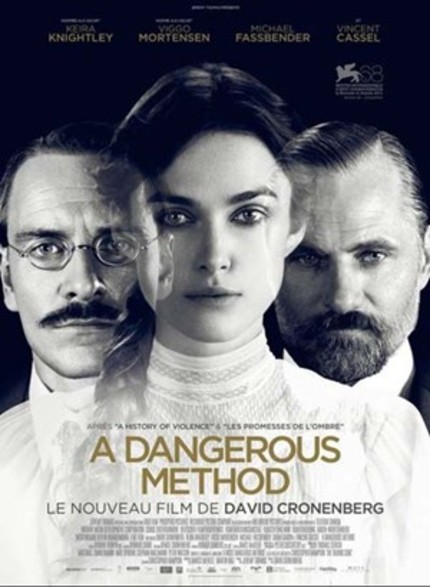 Perhaps the film I most anticipated at this year's TIFF, it stands to follow that David Cronenberg's fictionalized treatment of the interaction between Sigmund Freud, Carl Gustav Jung and Sabina Spielrein is my first major disappointment. But mine is not an objective position. For 20 years in my youth I was a full scholar with the San Francisco C.G. Jung Institute where I attended both public and professional seminars nearly every weekend. When others were going out to disco, I was soliciting the cooperation of my unconscious and circumambulating (like a slow snail) around dreams, which was of course only a hop, skip and a jump away from my current fascination with cinema.

I recall that at the time there was a concerted effort to veer away from hagiography, to focus on Jung's psychological theories, and to resist exploring the troubling accusations that Jung was anti-Semitic or that his relationships with his female counterparts were indiscreet and unprofessional. As much as I was told to leave Jung's personal life alone, it was well-documented that he was a lusty individual who liked his women, his whiskey, and his food. Recent volumes have not exercised such discretion, however and A Dangerous Method--Cronenberg's adaptation of Christopher Hampton's play addressing the interaction between Jung, Freud and patient-turned-therapist Sabina Spielrein--feels no compunction to shy away from how, in fact--and perhaps most controversial of all--his theories were shaped by his youthful indiscretions. That Spielrein steered Jung to understanding the contrasexual nature of the psyche, for example, among other aspects of his theory, certainly deserves to come to light.

But for as much as I was anticipating this film, I came away somewhat disappointed at its stately and overly mannered presentation. Perhaps this has something to do with no longer considering the "talking cure" as something dangerous. Especially when contestants on any reality TV show are more than willing to talk about their dirty secrets in public. If anything, what has been most dangerous about this method is that it has now become so commonplace. There is certainly lots and lots of talking in A Dangerous Method, lots of exposition spoken in lots of mixed accents, and the overall conversation has left me lukewarm. In some ways Elizabeth Márton's 2002 documentary My Name Was Sabina Spielrein offers much more to chew on than A Dangerous Method. That documentary is currently available through Facets Multi-Media.

I did appreciate that Cronenberg's effort attempted to depict two of my favorite anecdotes in Jung's life, though both came off anemic in the film. The first is the infamous library scene where the bookshelves crack. Jung writes about this episode in his autobiography Memories, Dreams & Reflections as determinative of his belief in the somatic root of the paranormal. Colleague Bruce Fletcher articulated for me that the reason the scene failed in the film was because it was shown through Freud's dismissive point of view and not Jung's. The second episode is when Freud faints fearing Jung wants to kill him as a father figure. My understanding is that the later scene especially was brought on by Freud's fear of the bog man, an infamous attraction at the time, and an attraction that Jung enthusiastically wanted to visit when Freud and he were traveling near the bog. Freud interpreted Jung's enthusiasm as a thinly-disguised wish for Freud's death.

Michael Fassbender makes for a handsome and sensually conflicted young Jung and Viggo Mortensen is convincing as Freud, but Keira Knightley is ill-equipped to handle the demands of her character. Sticking her jaw out like Popeye is simply not enough.