There's a reason why Cronenberg is the first name in body horror - his, ahem, body of work, spanning several decades, has evolved from arguably the more explotative (Shivers, The Brood), to the more Romantic and deeply rich psychological/body horror of the late 80s and 90s, he's been a (mostly) consistent force, with certain themes developed over his oeuvre. With his latest film, he returns somewhat to what I would call his middle period, which (for me) is the height of his talent.

Crimes of the Future is perhaps less of a groundreaking work, and more a further extension of ideas and themes that Cronenberg has found the most fruitful to his vision. Incorporating some examination of our contemporary social media and televisual culture, set in a strange semi-dystopain world, it has a confortable familiarity tinged with a few updates and tweaks that show Cronenberg's unique understanding of the hidden perversions and desires of the human psyche.

In an unnamed, decaying city, set either in some strange near future, Saul Tenser (Viggo Mortensen) is a rather unique performance artists; his art comes from his body's abiity to grow new organs without an identifiable function. His artistic partner and daughter lover Caprice (Léa Seydoux) tattoos these organs while still inside his body, then performs a kind of living autopsy in front of an audience. Humans, it seems, can no longer feel pain, a condition which, while truly dangerous, has spawned an underground culture of this art of harm and mutilation. Humans like Tenser are now seen as not-quite-human, as 'official' society rejects anything that deviates from what they see as the finality of evolution, humans in their current state. Enter Lang (Scott Speedman), a man who also operates underground - only for him, humans such as Saul are the next stage in human evolution, and Lang intends to prove it through not-so-pleasant means.

The body horror of this story is one of pain and precision - Saul's strange changes are not ones he asked for, and they leave him in almost constant pain. He sleeps in specially designed beds, eats out of a chair made to help him with his digestion, he frequently wears a scarf over his mouth and nose, as if to keep out germs that could easily kill him (presumably pandemics are a constant concern). He wants to move as a shadow in the world, yet his presence is undeniable, drawing those in even when he might wish to be left alone. Surgery is the new sex, as new acolyte Timlin (Kristen Stewart) states: the old sex becomes obsolete as new areas of the body can be cut into and transformed. 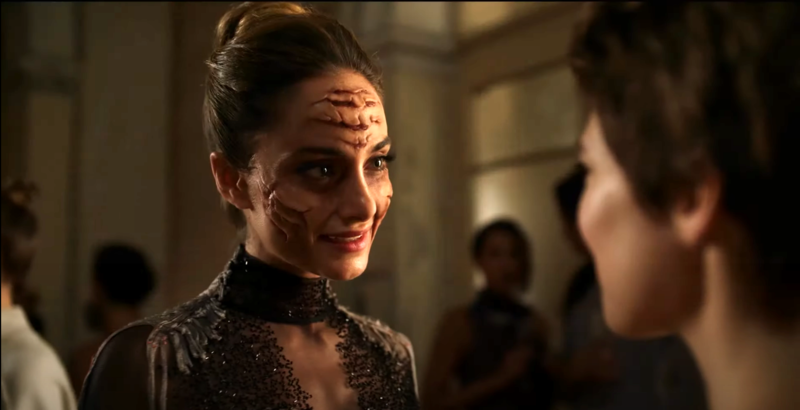 These machines which keep Saul alive, which operate as his performance space, have a cold sensuality (much like Saul himself); in a world where humans seems to have emptied themselves of meaning, and reach for anything that might give hope or love - such cruelty to their bodies seems an extention of the cruelty now ramptant in the world around them. This is the melding of grotesque and the synthetic - if we think of the fomer as something a bit more old-school, something analog as represented in the crudeness of the offices Saul visits when 'registering' his body, and the latter as a world in which people will cut open their bodies simply because they can, and complexly because, with nothing else to offer, they offer their flesh.

This is a dirty world, where the natural world is almost completely absent - Saul meets a contact next to an harbour with obsolete boats, almost always walking at night, with only artificial light as his guide. This golden light is tempered and worn out, much as the souls around him, and those with privilege (like Saul, in a sense) can only find now exist in this strange artifice. Even those few workers we meet, such as the mechanics who service Saul's modified chairs, Timlin and her associate Wippet (Don McKellar) cannot help but be enthralled by Saul and people like him, even at it disgusts them - hence the constant need for those who would disfigure themselves for our entertainment. The work of Cronenberg's longtime Production Designer, Carol Spier, is one beautiful display - we slip into the confort of a familiarity with it, while the edges of new ideas close in, in a world increasingly hostile to 'natural' human life.

Saul exists somewhere between The Fly's Seth Brundle and (the highly underrated) M. Butterfly's René Gallimard; a man living in a world which is hostile to his presence and body, even as that body is a reflection of that world. What does it mean when your body seems to be in an evolutionary rebellion, and the only way to contend with that is to put it on display? Is art only art when it can be dissected, figuratively and literally? If our bodies are all we have to offer, in work and art, will their transformation, artificial or natural, increase or decrease our value as humans?

There are some scenes that might make even the strongest stomach a bit squeamish involving a child (Cronenberg has never been shy about showing people the true darkness behind our body obsessions, where they could lead, but always with a critical eye). And there are moments of dark humour (particularly from Welket Bungué, as a cop who has no time for the art world's pretentions), that bring the necessary moments of clarity in the absurdity of the situation.

Crimes of the Future keeps within Cronenberg's web of ideas, while creating some new strands of thought. An update to his contemplation of the body and the horror in the 21st century, in a world where we are all on display, where our bodies (and our world) are increasingly artificial, and how this transformation, or mutilation, changes the nature of humans.

Crimes of the Future

Do you feel this content is inappropriate or infringes upon your rights? Click here to report it, or see our DMCA policy.
David CronenbergViggo MortensenLéa SeydouxKristen StewartDramaHorrorSci-Fi