Have Your Say: CRIMES OF THE FUTURE, New David Cronenberg

Opening today in North American movie theaters, Crimes of the Future is a new film by David "Mr. Canada" Cronenberg. In celebration, we've been looking back at his distinguished career this week.

Shelagh Rowan-Legg reviewed the film last week, in connection with its worldwide debut at the Cannes Film Festival:

"There's a reason why Cronenberg is the first name in body horror - his, ahem, body of work, spanning several decades, has evolved from arguably the more exploitative (Shivers, The Brood), to the more Romantic and deeply rich psychological/body horror of the late 80s and 90s, he's been a (mostly) consistent force, with certain themes developed over his oeuvre. With his latest film, he returns somewhat to what I would call his middle period, which (for me) is the height of his talent. ...

"Crimes of the Future keeps within Cronenberg's web of ideas, while creating some new strands of thought. An update to his contemplation of the body and the horror in the 21st century, in a world where we are all on display, where our bodies (and our world) are increasingly artificial, and how this transformation, or mutilation, changes the nature of humans."

As you might expect if you've ever visited our site in the past, Cronenberg's newest film stirred visceral reactions from our writers and editors. Click through the gallery below to read just a few reactions from those who've seen the film at advanced screenings, and then enjoy three official videos published by Neon. 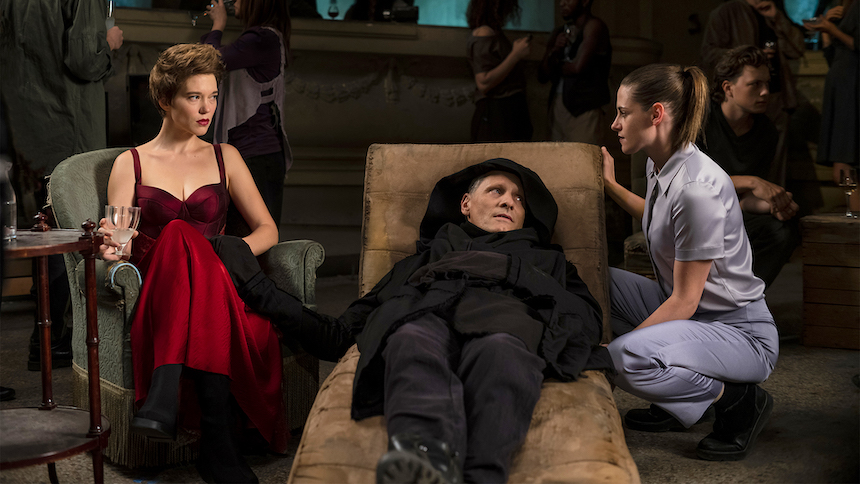 Watching Crimes of the Future immediately reminded me of the famed painting by Rembrandt: "The Anatomy Lesson of Dr. Nicolaes Tulp."

In it, spectators surround a recently deceased corpse and Dr. Tulp is explaining the denuded musculature of the corpse's left forearm. Yet, the spectators' attention is not with the corpse but elsewhere and they are not even noticing the inaccurate arm -- it's the right hand depicted instead of the left.

Rembrandt was commenting on the inadequacy of seeking knowledge and truth in the human body. And this is the point Cronenberg has been making all his career: our futile quests for answers in what makes us humans, in our bodies which are the most personal, tangible things that each of us possesses, and not finding it there. And pursuing so hard to find something in all the blood and guts, you lose sight of whatever the humanity that's left in us.

In a way, Cronenberg is going back to the basics, to the flesh, after more cerebral musings in searching for the soul (A Dangerous Method, Cosmopolis). Crimes of the Future is less kitschy and much less an over-the-top parody like A History of Violence or Maps to the Stars. And its general mood is closer to Spider and Dead Ringers.

Nonetheless, it's undeniably Cronenbergian, and great. 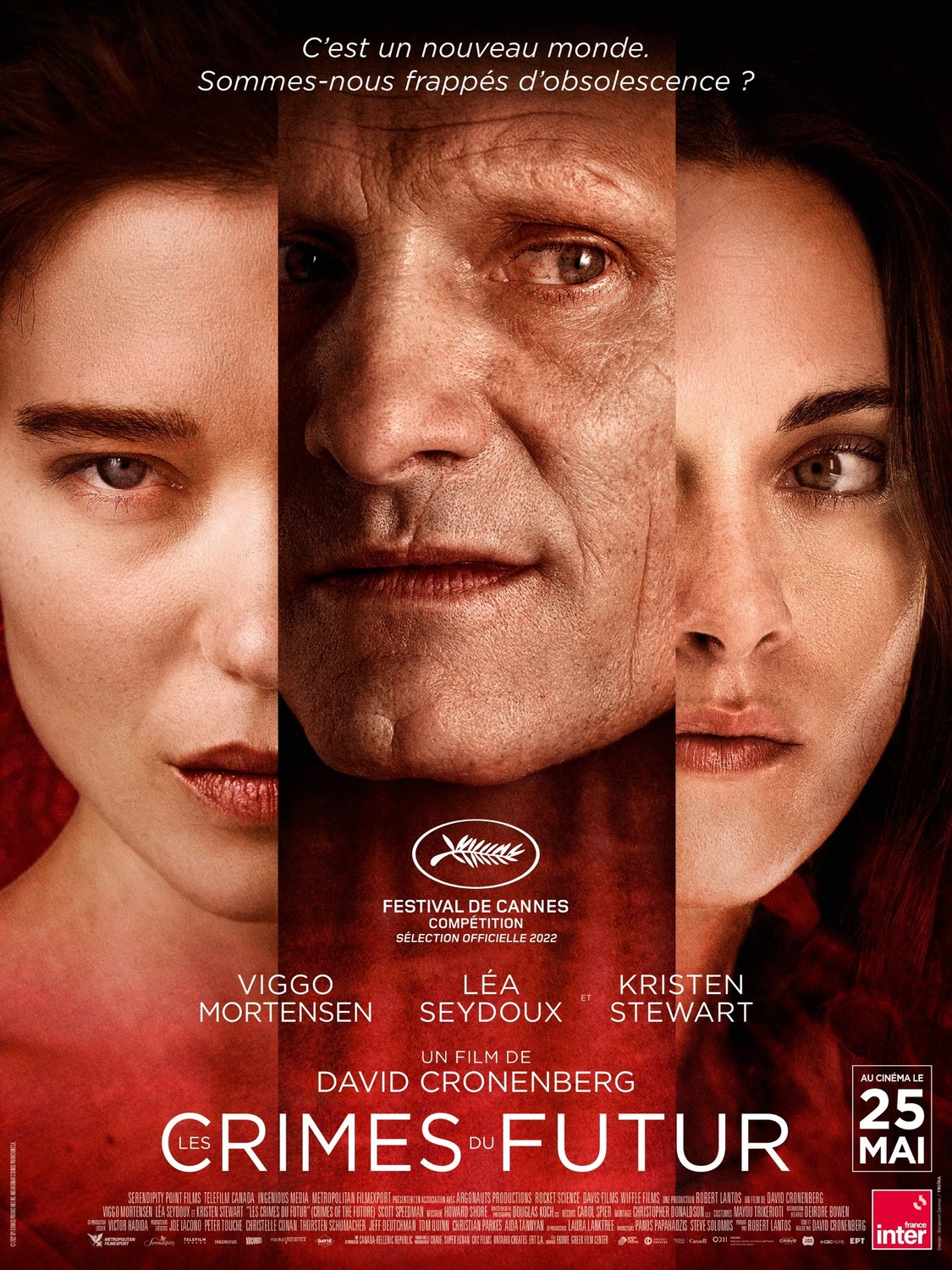 After an eight-year hiatus from filmmaking, David Cronenberg makes an unsurprisingly triumphant return to the Body Horror sub-genre with his 22nd, feature-length film, Crimes of the Future.

Bearing more than a few similarities with the 1970 experimental art-horror film that shares its name, Crimes of the Future leans heavily into the ideas, themes, and plot elements (e.g., bodily transformation/autonomy, government conspiracies/control, and our techno-biological/evolutionary future) that became synonymous with Cronenberg’s name. 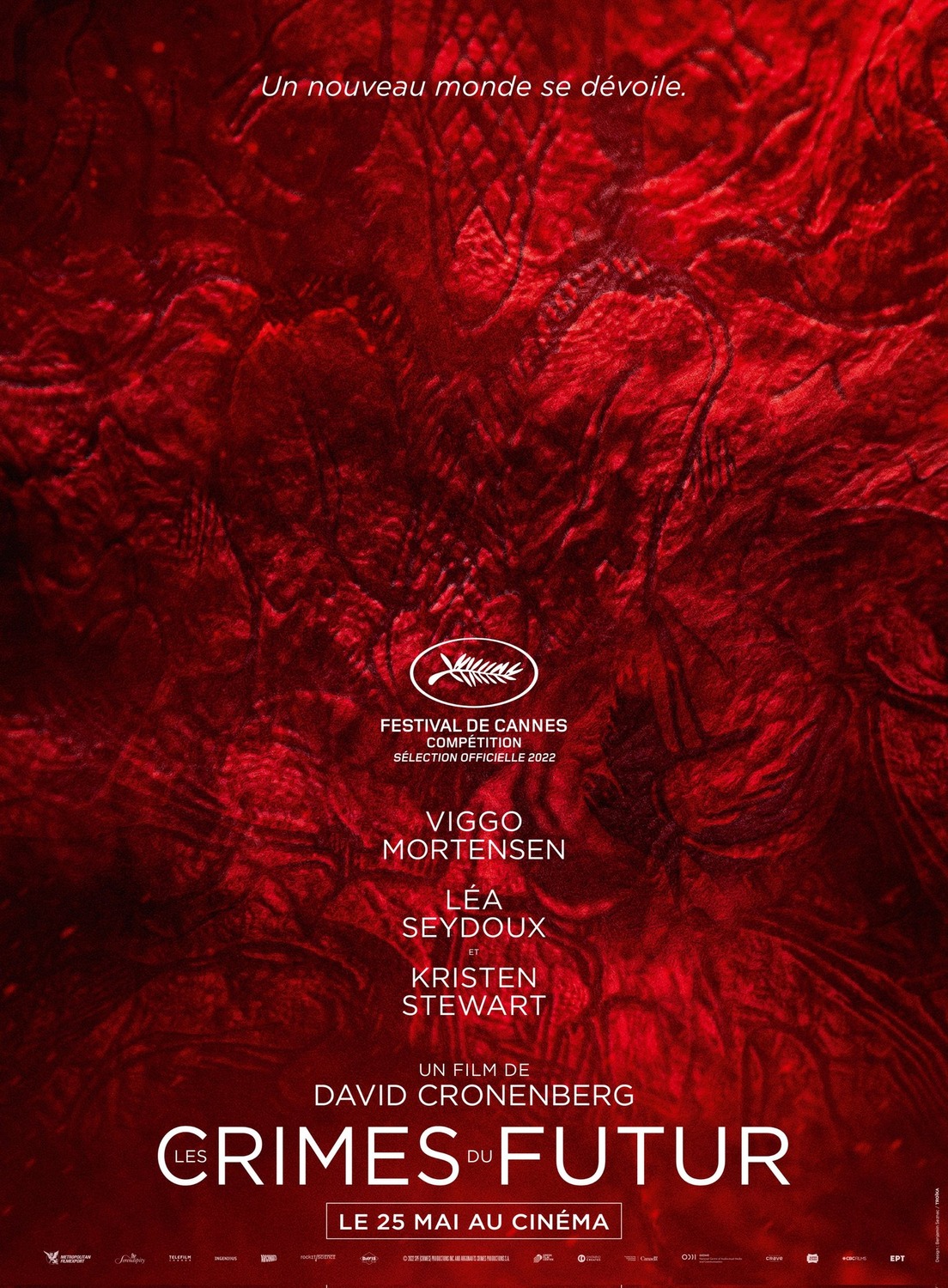 The opening shot is a marvel to behold. A young child plays on a sun-kissed beach, absentmindedly digging for something. In the background, he is dwarfed by a massive 20th-century ship half-submerged on its side. The decrepit and the youthful in one magnificent frame. This echoed, for me a key image from Andrey Zvyagintsev’s 2014 dark Russian drama, Leviathan, a film about the literal and metaphorical skeletons of society, ignored but somehow gargantuan, in plain sight.

It is the near future (albeit filmed in COVID-19 era Athens, Greece), where the human race has evolved to stop feeling pain, possibly from the toxins and poisons of the 21st century. Subcultures have evolved out of ‘theatrical surgery,’ a performance art of body manipulations. One such show has a woman receiving open wounds, carved into her high cheekbones while back-straight posture in a boudoir that looks like Marie Antoinette-era France, while another is an interpretive dance in an old factory, when the dancer has hundreds of ears sewn all over their body. A character whispers, “Surgery is the new sex!”

It might be tempting to write off Crimes of the Future as a ‘greatest hits’ album after being out of the feature film making for nearly a decade. At the end of the 1990s, David Cronenberg moved away from sticky body horror, and into more literal psychological spaces, starting with 2002’s complex and tactile Spider, and culminating with his wildly uneven 2014 misfire, Maps To The Stars. In between he made several solid dramas and thrillers with Viggo Mortensen. Crimes of the Future is an original work that fuses things together in a way that feels both familiar and fresh (Videodrome, eXistenZ and Crimes of the Future could be considered to be a kind of ‘Media-As-Flesh-Future’ trilogy)

In the case of Saul and Caprice, she is a former surgeon who carves out tumors from his body for a live audience. But not just any tumors, ones that she meticulously tattoos while still living inside the host, so they come out like blown-glass vases, and are displayed, you guessed it, in blown glass vases.

All of this theatricality is a veneer for sinister politics and secret societies around post-industrial waste (recall the tanker?) and fading, bankrupt institutions. There is National Organ Registry that keeps a library and record (in paper books, there is no obvious internet in the future), it is staffed by a pair of fussy and awkward bureaucrats, played by Canadian national treasure, Don McKellar, and the ever surprising Kristen Stewart, who weaponizes her gawky body language in escalating, hilarious ways. They are the charming yang to the buzzkill yin of Saul and Caprice.

Everything is upside down when the paper pushers are the happy-fun-time and the celebrated artists are boorish and job-sick. Viggo Mortensen, as Saul, spends much of the film either hacking at the phlegm in his throat, roaming about Jedi-cowl-cum-bathrobe, or struggling with his expensive creature comforts: a feeding-chair made 3D printed bones, and expensive, perhaps sentient, water-bed. All the while they are agonizing about their art, and ‘What to do next.’

Things might be less operatic and digestible as the director’s exceptional remake of The Fly, or not quite showcasing darkly disturbing behavior of twin gynecologists of Dead Ringers, or the car-accident enthusiasts of Crash, but there are echoes of design and visual choices from that period. The ironic, curious playfulness in the performances, which did indeed remind me of his last go at gooey-cyberpunk, the vastly underrated eXistenZ.

There is a whimsy at play here that I have not seen so overt in his films that period. Granted, it has been continually present in his many turns as an actor (for instance, his bureaucrat in Don McKellar’s Canadian apocalypse classic Last Night), as well as his interview and stage presence on the film festival circuit.

At times, I felt that Crimes of the Future was the abandoned love-child of Naked Lunch (Lea Seydoux, as Caprice, seems to be channeling Judy Davis at times) and Terry Gilliam’s Brazil. There are a couple of surgical equipment technicians, along with the aforementioned Organ Registry, that rhyme with the various strange blue-collar workers (recall Robert DeNiro and Bob Hoskins). On the 1%er side of things, the strange facelift of Katherine Helmond also has a kind of visual rhyme. Maybe it is just me.

Things are not all fun and games, and film history. Cronenberg’s inquisitive curiosity for what makes individual humans ‘get weird,’ as a function of the critical failings of society at large, is the hallmark of his body of work. His latest film, hopefully not his last, will of course not be for everyone. The surgery scenes are most definitely NOT for the faint of heart. Here is a filmmaker that has always played at the outré end of cinema, and it is satisfying to see him both reconsidering his past glory, all while putting another bloody jewel in his flesh-digging crown of thorns. 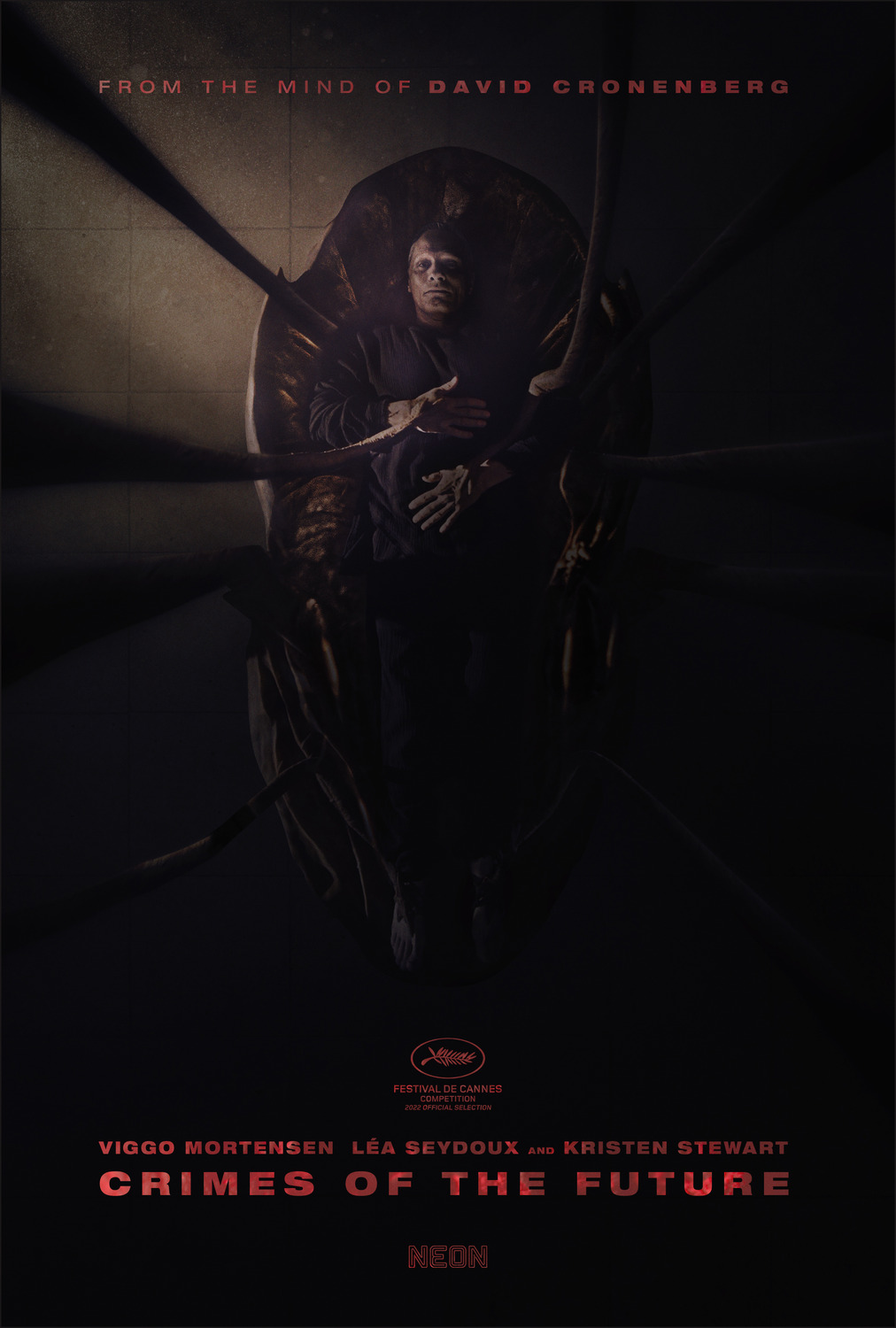 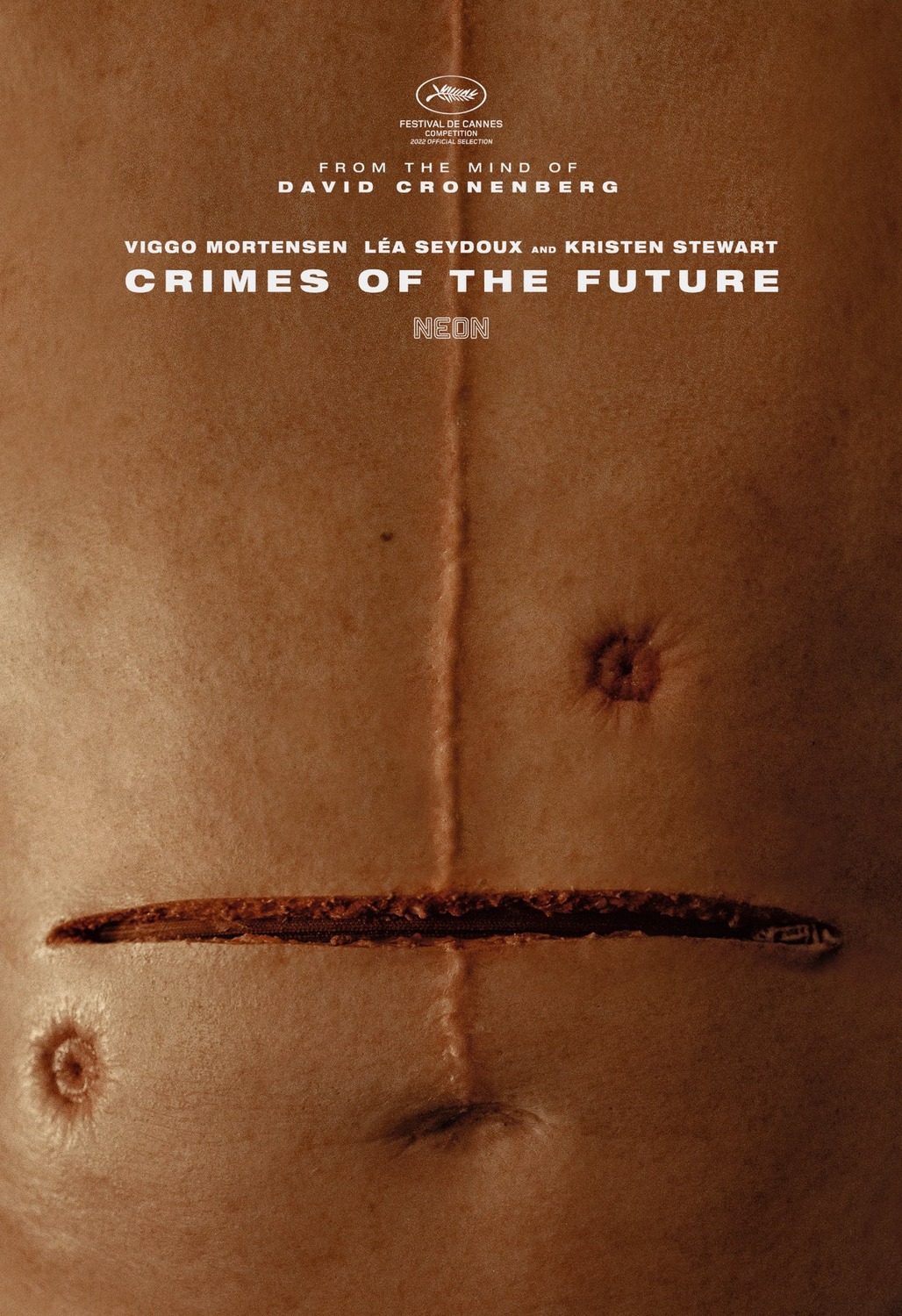 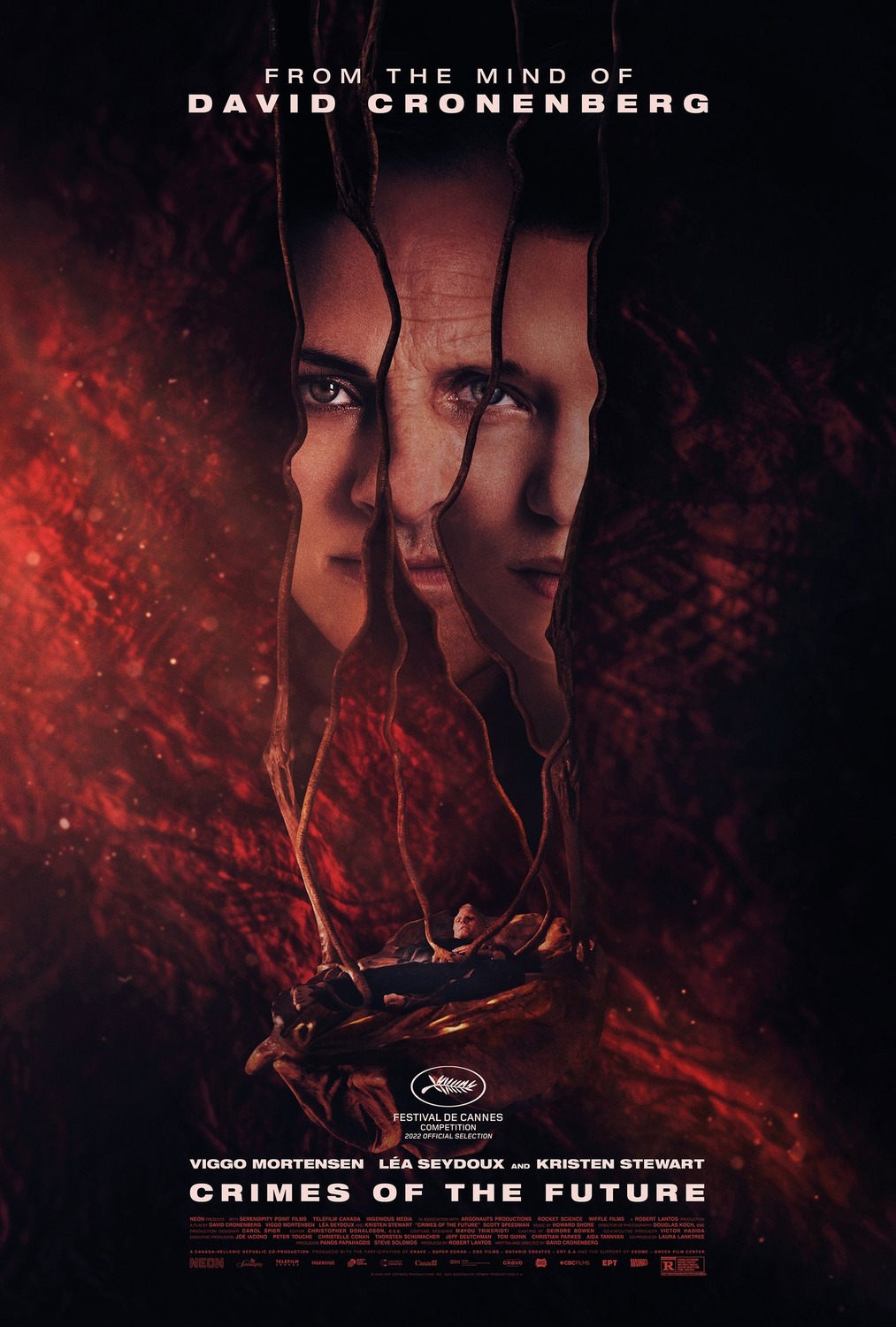