Advice to Torontonians: Don’t watch 'Crash' during a pandemic in December 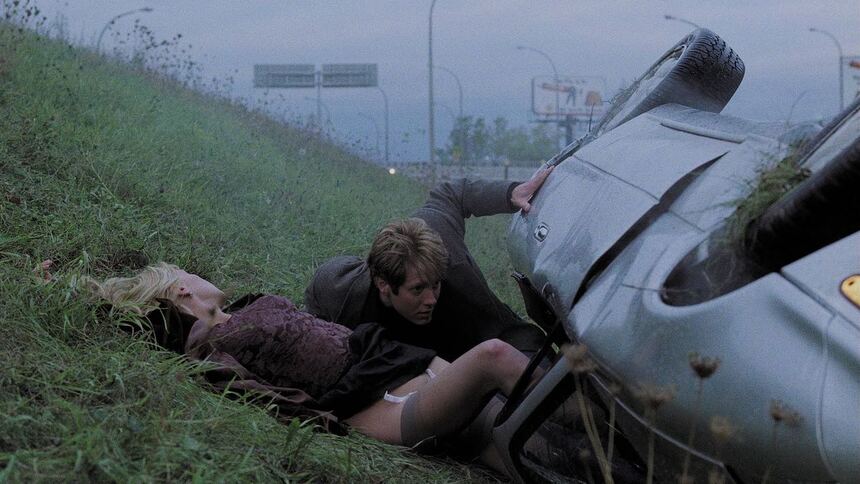 I was in my first car accident, the year before last. No one was hurt (besides the cars). Before it happened, there was something unsettling about my then perfect-for-25-years driving record. Everyone I knew had been in something, and I kept skating by, unblemished. I'd never even dinged a fender on a parking garage column.

In David Cronenberg's Crash, which no right-minded film fan would ever confuse with the Academy Award-winner from 2004, James Ballard (James Spader) is in his first car crash, too. He remarks that after years of absorbing road safety ads, the event itself almost came as a relief. I felt that: the shriek of metal-on-metal as I dragged half the side of my car off on some poor British lady's four-door certainly wasn't a pleasant sound, but it had the ring of a threshold marker to it. At last, I'd arrived.

Perhaps this is the providence of the anxious: to be forever peripherally aware of the other shoe, hovering above; and therefore, at least marginally relieved when it finally drops. Perhaps that was the providence of this year, too; no culture as fixated by post-apocalyptic fiction as ours could help but have (at least a few) members who felt that ghastly relief, that "I told you so" tingle of dread, as plague struck and communal living turned inside out.

Except, we're mid-apocalyptic right now, and the world of Crash -- released in 1996 based on a book from 1973 -- feels eerily conjoined to our 2020. These people are living in a mid-apocalyptic landscape, as well, albeit a much quieter one.

There's nothing specifically wrong with their world besides the moderate possibility that traffic is insidiously increasing, but everyone within Cronenberg's frame seems to be living out some kind of fin de siècle dissociation -- or worse, recombination. It is hard to tell the people from the machine world in this film.

Crash (re-)joins the Criterion Collection this month at spine #1059, having previously only appeared as one of the fabled "lost" Criterion laserdiscs, never ported to DVD or blu-ray. To my surprise, the release is entirely archival: the film has been digitally restored in 4K, but everything else about this release has been sourced from the '90s, including Cronenberg's laserdisc commentary track. Two monster archival video features and an Electronic Press Kit (remember those?) fill out the set. Crash 2020 is lost in time.

It's extremely unusual for a contemporary Criterion release to include no material looking back on the work with the benefit of hindsight (Jessica Kiang's outstanding in-jacket essay, to which this review is indebted, is the sole exception) but somehow in this case, it seems to fit. Crash is both drily time-and-place, permanently stuck in the '90s from whence it hails -- Peter Suschitzky's dread-blue night photography bouncing off late-20th Century roadsters careening through the streets of Toronto back when cell phones still had those spring aerials on the back windshield -- and yet it feels precisely, almost uncannily, contemporary.

The film anticipated, perhaps not the fusion of man and car (and sex), but the more neurally-dessicating fusion of what currently passes for "desire" with the endless, faceless, sexless super highways of the online world. No one in Crash ever seems to be enjoying themselves, during sex or any other time; in fact, it wouldn't be too much of a leap to say that no one in Crash ever seems to be someone, at all. This isn't a story of characters inhabiting an identifiable landscape; this is what Hell would look like, if human passion were sent there to be entombed.

Spader's Ballard is a zombie somnambulist stumbling through his day job (a filmmaker, natch) with his eyes half closed, playing remote-control polyamoury games with his wife (Deborah Kara Unger), and introduced nose-deep in a sex partner's asshole and not seeming to feel any of it until the moment his car jumps the median and crashes head-first into opposing traffic. This extraordinary inciting incident -- one man is killed, and both Ballard and another passenger (Holly Hunter) are badly injured -- is both the start of Ballard's vile journey inward, and the most conventionally comfortable we'll feel till the film's end credits.

Ballard tumbles into a subculture of self-annihilation fetishists whose erotic and thanotic impulses have been cross-wired; as their bodies are gradually destroyed in an escalating series of near-fatal car stunts, so too do the last drops of whatever stimulation they seem to be able to eke out of their own bodies bubble torturously forth. It would be easy and accurate to call Crash gross, both in the schoolyard and literal sense; it's sickening and excessive in equal measure, with agonizing sex scenes staged as snuff films and performance art built around vehicular manslaughter. All this in a Toronto that seems to consist solely of the Gardiner / Lake Shore, and the airport (in real life, they are separated by about 15 miles), a maze of highways upon which Elias Koteas' sociopathic artist rides kingpin in a gas-guzzling roadster, the same make and model as the car in which Kennedy was shot.

It would be misjudged to call the film "good," because I'm not sure it's operating in a language that approximates most feature filmmaking at all. Prefer instead to call it "viscerally true;" there is something in its image system -- Koteas' Vaughn calls it "benevolent psychopathology" -- that knocks sharply against the displacement every one of us still locked down for Christmas 2020 seems endlessly bound to experience. I don't know if I'm glad I watched it, or angry; but I know that I saw Crash, as if for the first time, when doing so now.

Do you feel this content is inappropriate or infringes upon your rights? Click here to report it, or see our DMCA policy.
David CronenbergHolly HunterJames Spader