Now on Blu-ray: eXistenZ & THE GRIFTERS From 101 Films Black Label

UK cult home video specialists 101 Films recently launched a new line of limited edition releases under the banner 101 Black Label. The first two films to get the deluxe treatment are David Cronenberg's eXistenZ and Stephen Frears' The Grifters. Both films have been released previously on Blu-ray, though the former had no previous UK release, so are these two worth the upgrade? Check out our overviews in the gallery below. 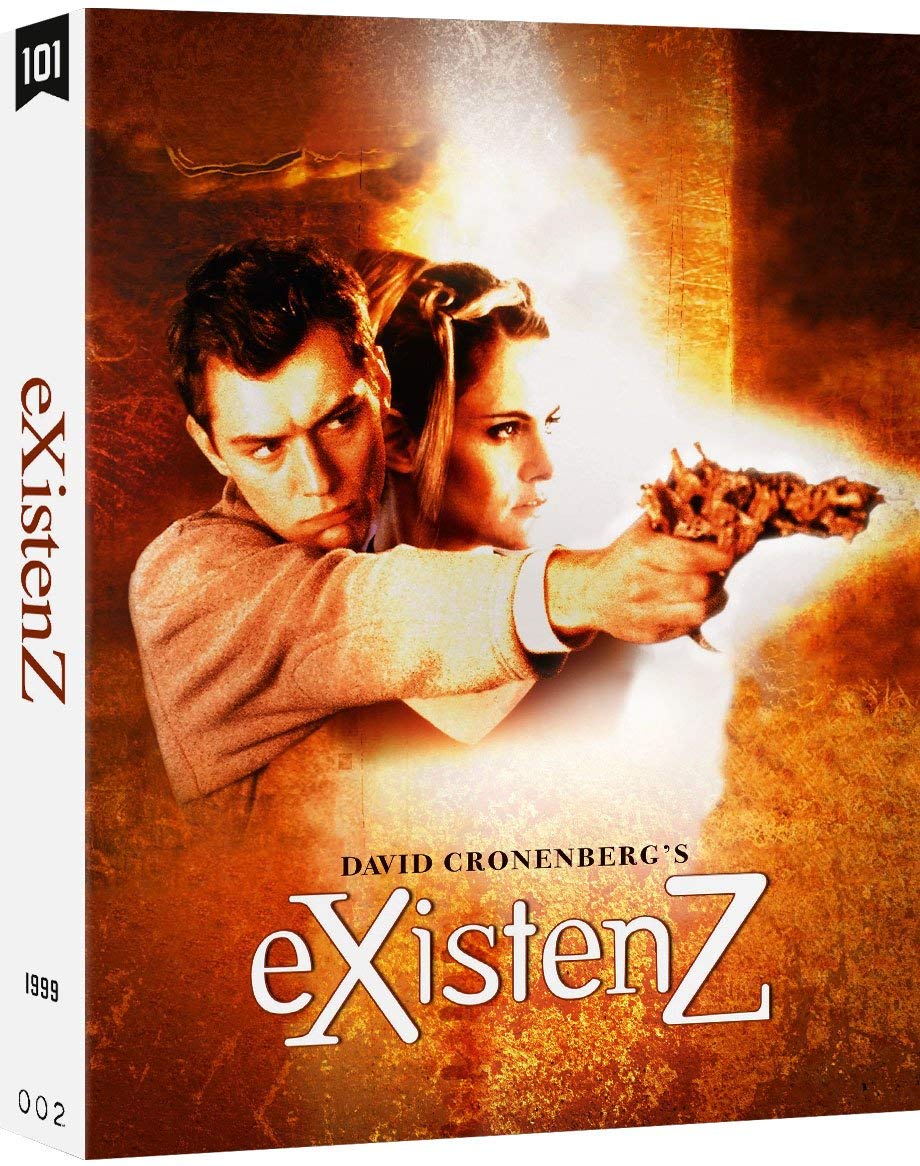 As a movie hungry high schooler I fell in love with the early '80s work of Canadian auteur David Cronenberg. His early films felt important, like they were saying something that I wasn't quite mature enough to understand, but I knew it was important. On top of that, they were gruesome and fun to watch. That combination of convention busting genre weirdness and cultural literacy spoke to me in a way that not many filmmakers work had. I was a horror and cult film nut, but access was a big issue even toward the middle of the '90s. I didn't have a job, so no income to speak of, which meant a lot of my movie education came from perusing what few magazines I could find and reading through film synopses in mail-order catalogs like Video Search of Miami.

When I moved out after high school to go to college, I chose to attend UC Berkeley about 50% for its stellar academics, and 50% for its proximity to my twin meccas, the UC Theatre on University Avenue (a quick walk from my dorm), and punk nirvana 924 Gilman (a much more substantial hike). The UC Theatre had amazing repertory programming, among my most vivid memories was a Halloween horror all-nighter that opened with Cronenberg's Rabid, and seeing Cronenberg on a massive screen changed me. That was the first time I had seen his messed up, gooey vision on a screen bigger than a dinner plate, but it wouldn't be the last. Fast forward a couple of years and I finally had my first opportunity to see a Cronenberg film in its first run in the cinema, that film was 1999's eXistenZ, and while I'm not 100% sold on the film, I'm glad I got to see this one the way I did.

eXistenZ marks an ending for Cronenberg, this would be the last of his fabled body horror films, after this he'd trade in his unique science fiction for more literal readings of the anxieties of the day. It is a story that foreshadows much of what has become commonplace today in terms of the melding of the virtual and real worlds. 1999 was a time when it looked like virtual reality was going to take over the entertainment industry - here we are nearly 20 years later, and we are still inching closer to that uto/dystopia - and eXistenZ was Cronenberg's way of addressing the distance being created between face-to-face communications and competing virtual relations. It's kind of shocking how close the film got to our present reality.

The story follows a game designer played by Jennifer Jason Leigh and a marketing executive played by Jude Law, both of whom are drawn into Leigh's game in order to save it from a group of terrorists intent on its destruction. The world of the game is classic Cronenberg, semi-organic mutants and game components recall much of the master's oeuvre, but I felt myself most often referring back to Naked Lunch and the world of Interzone as a kind of in-between world between the real world and Cronenberg's virtual unreality.

The film itself isn't one of Cronenberg's best, too much of it feels recycled from his earlier works, in particular, the obvious shouty nature of Videodrome. That film, while possibly my favorite of Cronenberg's, is anything but subtle in its aims and eXistenZ follows in that tradition of being perhaps a bit too literal. All that being said, it has very fun moments, and some great creature and goo effects to enjoy when the film and the writing gets a bit eyeroll-y.

101 Films Black Label's release doesn't present an A/V upgrade in terms of the previously available discs. The older US disc and this new one appear to share the same master, which appears pretty old and suffers quite a bit from edge-enhancement (sharpening), a common downfall of older masters and older Blu-rays, making the film look much less natural and more digital. The sound is pretty much equal, as well, so anyone looking for a new upgraded home theater experience from this disc will likely be disappointed.

Where this disc really excels and leaves previous existing editions in the dust is a massive collection of extras that not only ports over older supplements from the Canadian DVD - the best disc on the market in terms of extras - as well as adding several new and worthwhile bonus features. New to this disc are two commentaries, one with film expert Kim Newman and Ryan Lambie which is authoritative in terms of it's command of the film's history and production, and a second with film historian Nathaniel Thompson of Mondo-Digital, as well as an interview with actor Christopher Eccleston, and a wonderful booklet with new writing from Alex Morris - who puts up a much more eloquent defense of the film than I would- and Phillip Escort's interview with Cronenberg, as well as a handy glossary for the funky eXistenZ jargon used in the film.

In addition to the new material, the archival portion includes a featurette on the production design of the film, a commentary by Cronenberg, a promo featurette, a piece on the practical effects in the film, as well as EPK style interviews with Law, Leigh, and Cronenberg. Altogether this set presents a couple of hours of supplemental material, and that's not even including the audio commentaries. Well worth upgrading if you don't mind the same transfer. 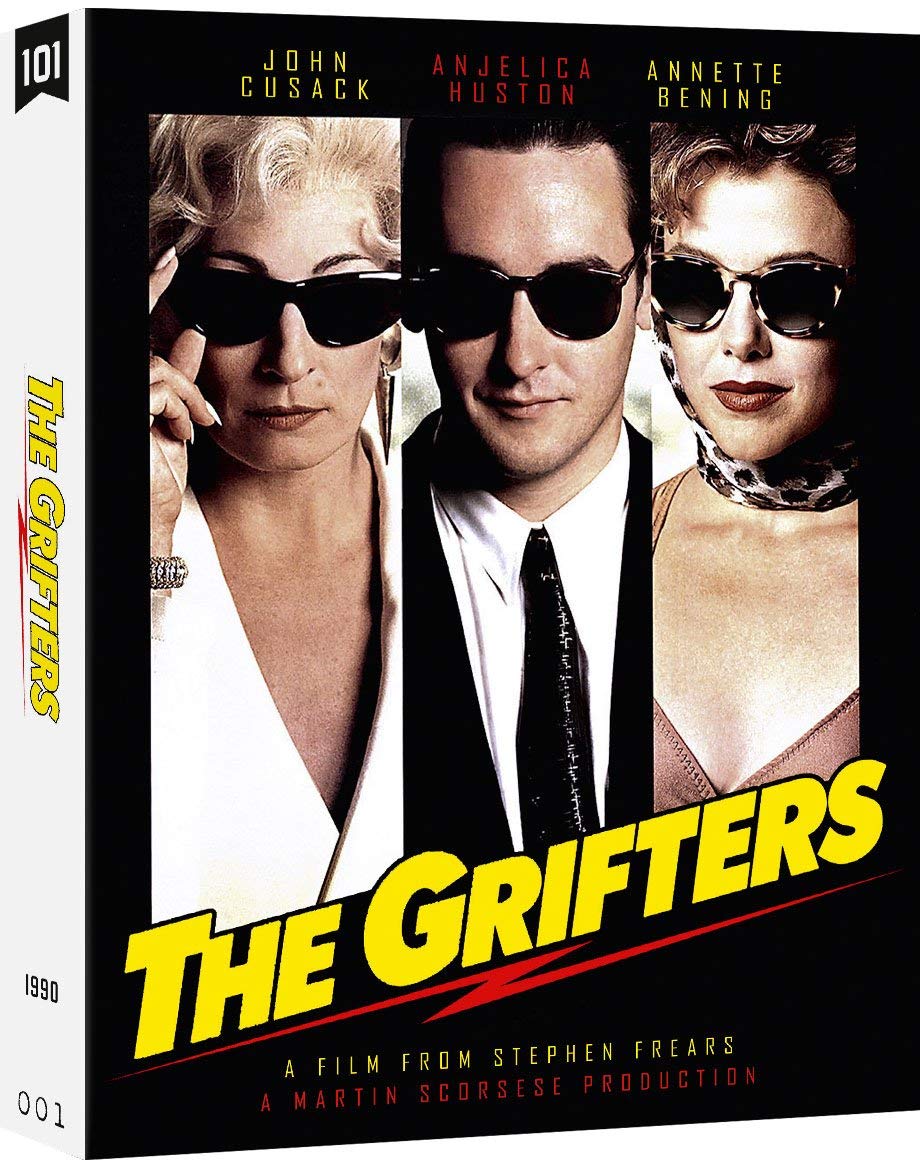 Stephen Frears' The Grifters couldn't be farther from eXistenZ if it was made on another planet, but it's one hell of a modern noir. This was actually my first time seeing this film, and I'm now kicking myself for years without its presense in my life. Starring Angelica Huston as a veteran runner for an old timey con man alongside John Cusack as her budding grifter son and Annette Bening in an early role as Cusack's love interest/co-conspirator/competitor, The Grifters is the story of a family running themselves into the ground in search of their next big score. It's gritty and violent, with quick, sharp dialogue and the kind of nefarious bad guys that don't exist outside of film noir.

The film is a fantastic tribute to the brutal tradition of underworld hustlers of the '40s. Taking influences from Jules Dassin's masterful run from 1947's Brute Force through 1955's Rififi, The Grifters recreates that film noir feel better than any other neo-noir of the '80s. Not only do the trio of leads act as though they are from those films, with Cusack filling out the role that would've been played by Richard Widmark back in the day, but there are refreshingly few markers that the film takes place in the modern era. If you were to make it in black and white, switch out a few cars, and nix a bit of the swearing, it's almost uncanny.

I loved this film and the story it tells. The story a violent, unstable triangle of criminals all looking to get the upper hand on one another using some incredibly acute leverage is like catnip to me, and the way it plays out is incredibly satisfying for this film noir fan.

Again, this Black Label release looks great, but does nothing to improve on the A/V qualities of previously available editions of The Grifters on Blu-ray. Thankfully, The Grifters is much less in need of an overhaul that eXistenZ, so it's easier to let slide in this case.

There is only one disc-based extra included in this package, but it's a doozy, and well worth the upgrade for fans. There is a 75 minute retrospective documentary on the making of the film, newly commissioned for this release and really fantastic in the way it goes in depth on the production. The documentary features interviews with Frears, co-producer Peggy Rajski, executive producer Barbara De Fina, cinematographer Oliver Stapleton, and editor Mick Audsley. It's a wonderful and engaging look at the film, and I'm an very impressed and thankful for its inclusion. Also included is a booklet featuring writing from David Cochran discussing Jim Thompson, the author of the book on which the film is based, and an overview of legendary composer Elmer Bernstein's career by Charlie Brigden.

If you are a fan of The Grifters, or classic noir, this region B Blu-ray from 101 Films is an essential release for the inclusion of the documentary if nothing else. Highly recommended!