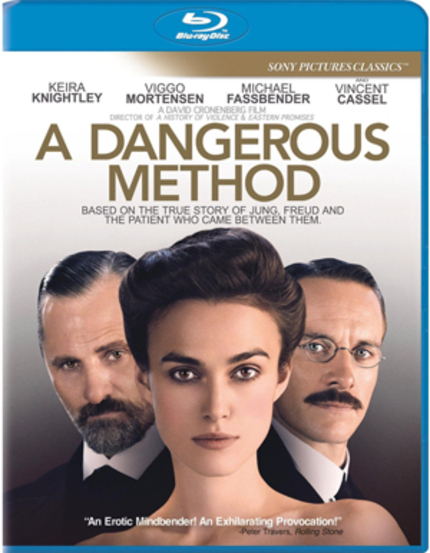 There was a time when the name "David Cronenberg" conjured a singular style. He built his name on a specific type of body horror no one else could approach. Back to his very earliest films, he examined the duality between man's body and mind in ways that have yet to be approached. Cronenberg's style was instantly recognizable, even when he adapted the works of others, as was the case in his classic retelling of The Fly and his take on William Burroughs' Naked Lunch. However, I fear those days may be gone.

There were signs of Cronenberg's mellowing as far back as M. Butterfly, but I think the split from his old self really began with A History of Violence. I love A History of Violence, don't get me wrong, but it was the first full-fledged foray into mainstream cinema cinema for Cronenberg. He'd made other films that took place in the real world, the brilliant Crash and Spider both existed in a recognizable universe, but never one that so firmly discarded the avant garde in every way. Cronenberg's adaptation of A History of Violence still manages to push some of the buttons that he is so familiar with, but I was able to enjoy the film as a smart, taut action film in place of the weirdness I'd always hoped for.

Eastern Promises was next up, and as much as I was wary of it, I really enjoyed it for many of the same reasons that A History of Violence was appealing. The action was riveting and brutal, the script was smart, and the story was engaging and quick moving. A few brutal moments of gory violence showed me that the Cronenberg I loved was still in there, trying to find its way to the surface, but I think I misjudged that, and it was the other way around.

A Dangerous Method seems to have secured my fear that David Cronenberg has sublimated the part of his lizard brain that gave me chills. He's taken the outward expression of his deep interest in abnormal psychology and made it the text, rather than the subtext. To many mainstream critics, this new Cronenberg is a more matured, mellowed version of the director with whom I fell in love back in high school. He's honed his craft and learned to say what it on his mind without splattering the screen with blood and guts, they'd say. He's becoming a man, a real filmmaker. If that is the case, then I've lost one of my heroes, and it hurts to say that.

A Dangerous Method was initially titled The Talking Cure, which was Sigmund Freud's early name for the practice of psychoanalysis. That title certainly fits better than the one the film was ultimately given, but it might have given away a little bit too much about the content of the film. A Dangerous Method is all talk. Talk, talk, talk. Now, I'm not saying I need those blood and guts to keep me engaged, but it is all so obvious. Every one of Cronenberg's fetishes is spelled out in capital letters. The sexual dysfunction, the abnormal psychology, they are all on clear display and it makes the content boring.

I don't have a problem with the performances. I know Keira Knightly has taken a lot of shit for overplaying her character's malady, but I watched this film with my wife, who is a psychoanalyst, and she said that the performance was spot on. Mortenson and Fassbender as Freud and Jung are also very good in their roles, but that's not enough. A Dangerous Method is very competent, but it is also very dry and unengaging, and that comes from a lifelong Cronenberg fan. Not even the fine performances of the leads can save it from talking itself to death.

There is still a tiny part of me that has faith that the old David and I will meet again, but that voice grows weaker with every passing film. There's no denying that Cronenberg has sharpened his skills and that with every film he becomes a better director, but to what end? A Dangerous Method is a gorgeously shot and scored film, there is no reason I shouldn't be in love, but I'm not. Please, David, come back to me...

Sony Pictures Classics Blu-ray presentation of A Dangerous Method is very good, but as unremarkable as the film. The image is satisfactory and presents a decent amount of depth and very good colors. The audio track is also very effective in presenting the dialogue clearly, though it really shines in its delivery of Howard Shore's wonderful score. Overall, there is no reason to complain. If you wish to see the film, this is the way to do it.

The extras on the disc are mostly very good, but the addition of a crappy EPK mars the overall quality a tiny bit. There is a very informative and forthright commentary from Cronenberg, who obviously has a passion for his subject, I only wish I shared his enthusiasm. There is also a half-hour interview and Q & A from the American Film Institute, which is very interesting and almost got me on board with the entire project, but not quite.

Listen, I know my reasons for being less than enthused about this film are perhaps a bit childish, but you know what, it's my review. I know he must be bored of making the kind of films I love, but I just can't follow him down this road if this is where it leads.

If you like the film, go for the Blu-ray, it looks and sounds great. If you haven't seen the film but you're excited for new Cronenberg, please rent it first, for your own protection.

Order A Dangerous Method on Blu-ray