What a fantastic day at the Morbido Film Fest! I got to spend time walking around the zocalo (town square), just a minute from the hotel where I'm staying here in Puebla, Mexico, visiting a bookstore and milling along with the crowds that make Saturdays in a big city so exhausting and yet thrilling for visitors. But once the screenings started, my senses were stirred in entirely different ways. 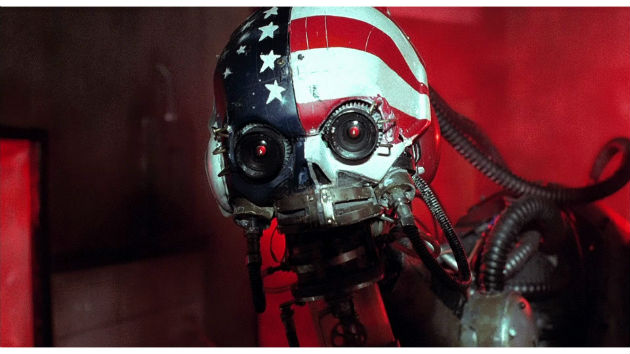 When it was released in 1990, Richard Stanley's directorial debut marked him as an up-and-coming talent. It's a properly weird, slow-cooking tale of the future, and about as far away from Star Wars and The Terminator as you can get.

Twitch's Todd Brown reviewed the film when it was released on Blu-ray by Severin Films, and he wrote in part:

"As any fan will tell you, the real star of this sort of film is not the human characters but the creature, in this case the robot, which is a nice piece of practical film making, an actual built-in-the-real-world metallic menace, a fact that unavoidably limits what Stanley can do with his villain but one that is a refreshing reminder of the tactile sense films lost when the industry started focusing so heavily on digital effects."

All I can add to Todd's review is that it was delightful to see this film on the big screen. I barely remember it when I watched it on videotape years ago, but this is definitely weird and wonderful, the work of a mad genius. 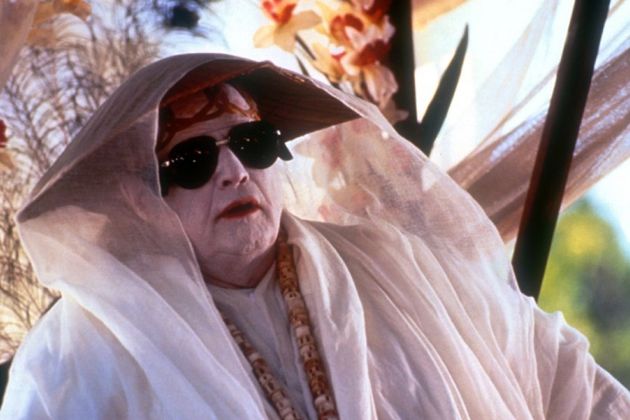 My second viewing of this captivating documentary made an even stronger impression, and convinced me that it should be essential viewing for any aspiring filmmaker -- and, indeed, for any movie fan.

"Told mostly from Stanley's point of view, director Gregory still manages to retain some degree of balance between the story of a visionary artist chewed up by the Hollywood system, and a studio doing what was necessary to protect their investment from an inexperienced filmmaker out of his depth. He is careful to get all sides of the argument, and while some parties are notably absent - Val Kilmer doesn't feature, while eventual leading man David Thewlis is never even mentioned - Lost Soul does feel like an even-handed appraisal of a calamitous situation."

James concluded that the documentary "keeps the conversation and the dreams alive, giving audiences a glimpse of the possibilities the story offers, while also showing us yet again the great conflicts and contradictions at the heart of the commercial film industry."

You can read his entire review here.

I definitely agree with James on this one, and the screening was gifted with the presence of Stanley -- sounding more upbeat than where the film leaves him -- Gregory, and veteran makeup artist Bruce Fuller, who provides sound of the most biting and insightful commentary from the viewpoint of the crew on the ill-fated film. 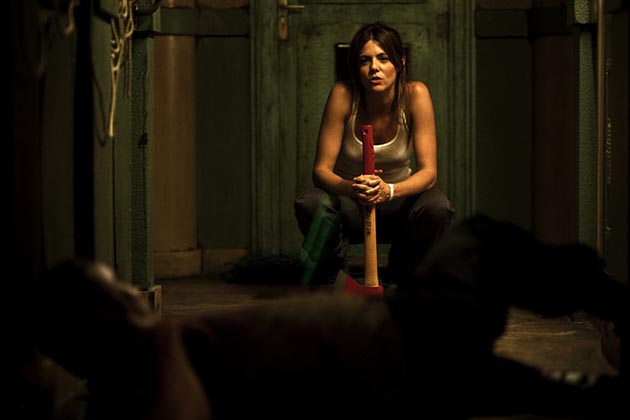 There's nothing like a really good zombie movie to drive a packed theater wild, and [REC] 4: Apocalypse delivered the right amount of action, blood, and gore to keep the pulse racing and the cheers coming.

Unfortunately, my extremely limited comprehension of Spanish as a spoken language meant I missed a number of story points and nearly all the dialogue, so I'll need to see it again to grasp those important elements. Still: yowza!

I loved Balagueró's previous effort, Sleep Tight, a smart, tight thriller, as well as the first two [REC] films, which he directed with Paco Plaza. [REC] 4 is so visually compelling that I was easily carried along by the characters and the setting, a clanging, claustrophobic ship at sea during an angry storm.

Our own Guillem Rosset caught the world premiere of the film at Sitges in September and had this to say, in part:

"Sadly, most of what made the original film such an enjoyable rollercoaster is also gone. [REC] 4 is an entertaining film, but comes across as just another modern zombie movie, with its array of familiar tricks and scares. The lead actress Manuela Velasco was very credible in [REC] as a young TV reporter dealing with the unexpected, but feels out of her depth here. Luckily the script acknowledges this and most of the dramatic weight lies on the shoulders of the rest of the cast.

"There's still fun in here, and there's a generous amount of bloody zombie action that will surely please the fans. [REC] 4 is an entertaining movie, and there's no doubt it works much better than the previous sequels, but it's also clear that it never reaches the same heights as the original."

You can read read his entire review right here."

Hmm, it's hard for me to disagree since I haven't experienced the movie fully, but the issue of familiarity never arose in my mind while I was watching it. Sure, all modern zombie movies have things in common, but even the original [REC] borrowed from familiar horror tropes. And I liked [REC] 3 more than most people, so this may come down to personal taste and experiences. No matter where you may fall on the 'reaction scale,' though, I think it deserves further viewings. 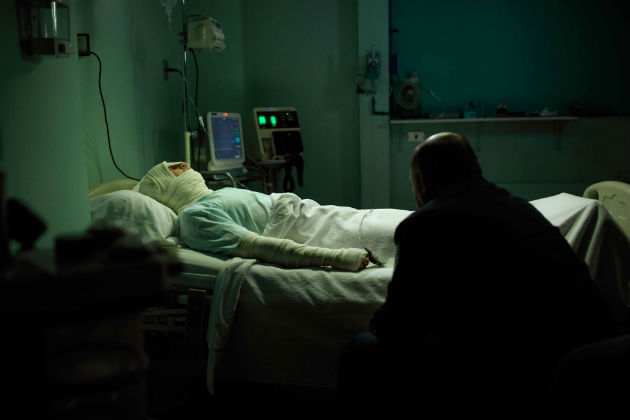 THE STRANGER Directed by Guillermo Amoedo

Taking good aim at its thematic targets, The Stranger develops a flavorful mood and navigates its narrative twists smoothly under the steady hand of Guillermo Amoedo, making his directorial debut.

Martin, the titular bearded character appears in a beautiful waterside community, evidently because he has just learned of the long-ago death of Ana, a former lover, and also someone with whom he shared a very special gift and/or curse. While grieving in a park late at night, he is picked on by a gang, leading to an encounter with a young teenage boy and a life-and-death struggle between multiple characters that drives the picture through the aforementioned twists.

Michele "Izzy" Galgana saw the film at Fantastic Fest in September, and in her review for ScreenAnarchy she commented:

"Throughout the film, there are cringe-inducing moments, gruesome special effects, sometimes done better in certain scenes than others. There are cop-shoot-cop moments, people burning alive, vampires succumbing to the sun, an impending death by gasoline immolation, needle-fu, and other assorted bits of nastiness.

"A big issue for the film is the dubbing; shot in English, one still gets the sense that this is a Spanish-language film but that it's not quite Spanish, and not quite English, and an unspecified locale. The acting is generally all over the place … Overall, The Stranger is a mixed bag but worth checking out."

You can read her review in its entirety right here.

I agree that the performances are an issue -- a fair amount of the English dialogue sounds flat -- though I had no problem with the locale being unspecified; this is a story that is more interested in exploring a mystery surrounding a genre that doesn't really need more specifics to be effective. For me, the mood that I mentioned up top carried me over the rough edges. 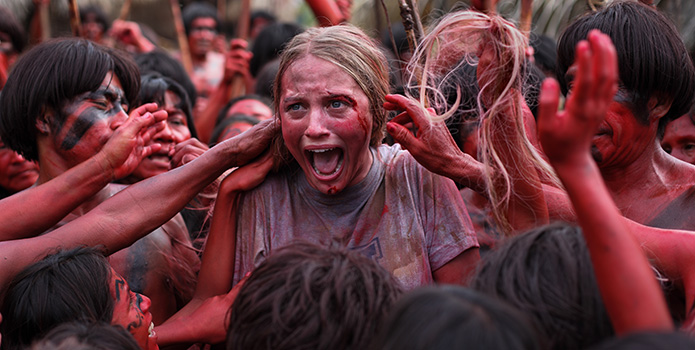 As the end titles began to roll for The Stranger, the audience was invited upstairs for what I thought would be a Q&A session -- my Spanish is not so good -- but instead turned out to be a secret screening of Eli Roth's new film.

Admittedly, I've not been a big fan of Roth's work, but this was as good as I've seen, featuring engaging characters and a good set-up, carried through with a gruesome yet thoughtful bang. Lorenza Izzo stars as Justine, a college freshman who is drawn to Alejandro (Ariel Levy), a charismatic protester, and ends up in Peru, surrounded by cannibals.

Guillem Rosset caught the film at Sitges last year and wrote about it for ScreenAnarchy. He concluded review by stating:

"The film's intentions are pretty clear from the start, so maybe the worst thing you can say about The Green Inferno is that it won't surprise you ... if it isn't surprising enough to find a film that seems ripped straight from the 80's in today's cinema. So if the premise of Eli Roth's new movie seem attracting to you, the chances are that you will probably enjoy this bloody ride. I can assure you that I certainly did, as did a packed theater full of genre fans in Sitges. There's no doubt that fans will be eagerly waiting for whatever comes next from Eli Roth's disturbed mind."

You can read his entire review right here.

What made the difference for me from Roth's previous films are the characters. Guillem felt that "Roth spends quite some time letting us get to know (or should I say get to hate?) the characters before sending them into chaos." Perhaps it was the late hour, but I cottoned to all the individuals created, at least at first. The protestors are young, earnest, and idealistic; occasionally they come across as shrill or overbearing, but, frankly, that describes nearly all the protestors I've known in real life: the issues that they are up in arms about are more important to them than how they present themselves.

Now, that changes later in the story, but the more sympathetic, recognizable nature of nearly everyone in the group creates a rooting interest for the audience, which is especially important since we know their chances for survival are extremely slim.

The post-post-post midnight screening played quite well to the audience. The film was due to premiere in U.S. theaters in September, but got tangled up in distribution issues. The Green Inferno certainly deserves a release.

That brought the long day to a conclusion on a very satisfying note, as our group of more than a dozen visitors walked through now-empty streets and passed through the zocalo to our accommodations.

Do you feel this content is inappropriate or infringes upon your rights? Click here to report it, or see our DMCA policy.
Morbido 2014Morbido FestMorbido Film Festival