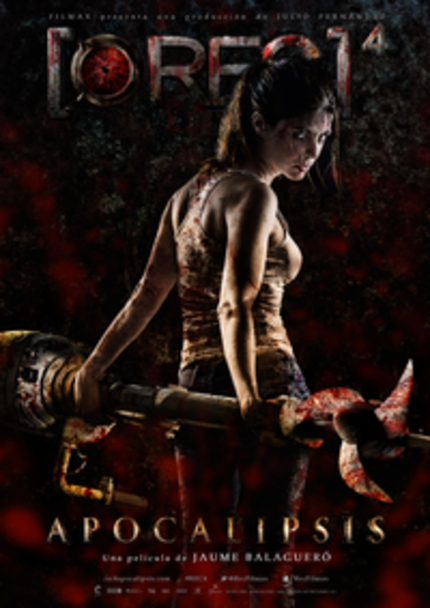 The cult success of the [REC] series was quite a surprise, not the least to co-directors Jaume Balagueró and Paco Plaza.
They never expected that their low-budget, found footage horror about a zombie-like virus and the havoc it wreaks on an apartment building in Barcelona would lead to three more films as well as two English-language remakes. But all good things must come to an end. As [REC] 4: Apocalypse is released on VOD, this Friday in the US, I sat down to chat with Balagueró, who directed the final film solo.

How did you approach the story of the film? How did you want to end the series?

After the second film, Paco and I decided that we would make two more films, and direct them separately, one as the beginning of the whole story and one as the end. And we wanted to make very different films from the first two. We didn't want to repeat ourselves, we wanted to make each sequel different, with a different approach to the horror genre. With [REC] 4, I wanted to make it more of an adventure/survival film, pure entertainment, as oppose to a strict horror film.

Was it easier not having to use the found footage format, which was a trademark of the first two films?

It wasn't easier, but it wasn't more difficult either. There are different ways to tell a story, and a found footage movie can be more simple. But it also requires some sophisticated elements. For me, it's complicated. So it was interesting to tell the story from a more neutral perspective.

What were the particular challenges of filming on a boat?

The space, the confinement of the narrow corridors, and the low ceilings. It was difficult, especially with fast action sequences. I was interested in keeping the atmosphere of that claustrophobia you get on a real boat. You get the mood more than if you just tried to recreate it in a studio.

What has the experience of the [REC] series been for you, considering you and Paco didn't anticipate going beyond the first film?

As a filmmaker, it was a fast way to learn about movie making, and the language of film, how to tie the stories together. To be involved in this kind of narrative, especially in the first two, I learned a lot about the different ways to explain narrative. Editing was the first one, in this kind of found footage mode, we learned how that works differently from conventional stories. But also how to have fun, these movies were fun to make.

[REC] 4 reminded me a lot of DAY OF THE DEAD, it seemed to deal a lot with conspiracies, and the military industrial complex.

For me, the movie is about power and how the powerful behave in a fixed and dramatic situation. In this case, the doctor has power, and that power isn't necessarily behaving incorrectly, the doctor is trying to find a cure or a treatment. I was curious to see how the audience would react, if they would always see power as a negative thing. I wanted the audience to be on the side of Angela and the guys who rescued her from the apartment building. I remember in the original Day of the Dead, there was something similar with doctors and the military, it's an interesting situation to explore, the relationship between different powers and the struggle for survival.

Is this well and truly the last film?

Yes, it is the end. The last shot of [REC] 4, some people think it's a bit ambiguous, but to me, it's the perfect way to end the story.