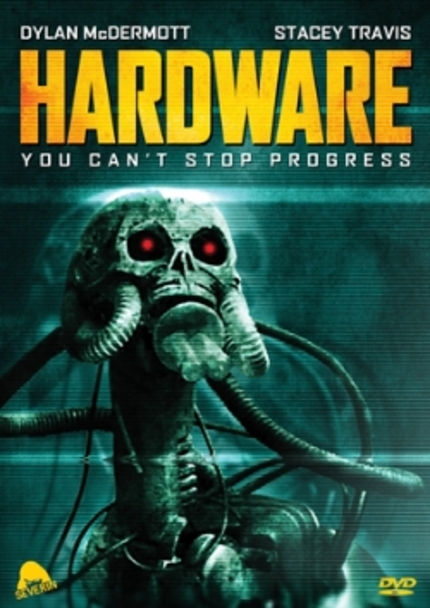 [This review originally appeared many moons ago and reappears now, expanded to include information on the brand new - and bloody well spectacular - BluRay issue of the cult classic from Severin Films.]

With its post apocalyptic setting, robot gone mad, extreme gore and a cast that includes Iggy Pop - well, his voice, anyway - and Lemmy from Motorhead, it is easy to consider Richard Stanley's Hardware to be essentially a lower budget, more intentionally punk take on The Terminator. This is essentially correct, though Stanley's film would be a Terminator set in a world where the humans are hell-bent on destroying themselves and their planet while the robotic killing machines are just on the verge of turning on their creators and supposed masters.

Dylan McDermott - yes, the guy from The Practice has done a surprising amount of b grade genre film - stars as Moses, a former trooper who has turned to scavenging for scrap in the radiation blasted deserts that make up most of the surface of the planet thanks to an ongoing nuclear holocaust. After a long stint away he is returning to visit his girlfriend Jill and he brings along a gift, the shattered remains of an unknown robot for her to use in her scrap metal industrial sculptures. His robotic gift is enough to get Moses through Jill's door and back into her bed - much to the delight of Jill's voyeuristic neighbor - but things go horribly wrong when it turns out that Mo's robotic find is actually an experimental battle robot, one capable of self repair and not nearly as dead as it appeared on first look. Equipped with whirring saw blades, poison needles and an apparent grudge against humanity it isn't long before the robotic menace is carving a bloody swath through Jill's sealed apartment.

Hardware is clearly a low budget affair but Stanley uses his limited assets well. The broader devastation is established through the use of color filters and available deserts and partially demolished buildings as sets. When he moves indoors Stanley limits the action to Jill's apartment and the immediate environment, choosing to focus his resources to create a richly designed, completely convincing microcosm of the world at large rather than spreading himself thinly over a larger environment and being less convincing. Though the body count is low there are several truly gruesome moments pulled of with an undeniable, and undeniably revolting, sense of style.

Beyond some moments that stretch disbelief a little two far the weak point of the film, unfortunately is McDermott. The man has since proven his chops in The Practice but he always seems slightly out of place in genre pictures or in anti hero roles, that is again the case here and Stanley would have done well to reverse the casting of McDermott and supporting actor John Lynch, who excels at the kind of weary resignation the role of Moses demands. But, as any fan will tell you, the real star of this sort of film is not the human characters but the creature, in this case the robot, which is a nice piece of practical film making, an actual built-in-the-real-world metallic menace, a fact that unavoidably limits what Stanley can do with his villain but one that is a refreshing reminder of the tactile sense films lost when the industry started focusing so heavily on digital effects.

Now, the new - and greatly anticipated BluRay release of the film. Severin have done themselves proud with this one. While the transfer is not pristine - there is a scratch in the top left of a few scenes - it is pretty damn close to it. This is FAR AND AWAY the best this film has ever looked and, honestly, unless you happened to catch a theatrical screening of one of the first two or three exhibitions ever given with a brand new print this is the best it has ever appeared. And while I'm not by any means an audiophile, the soundtrack seems every bit as good. Bonus features? Loads of 'em including three rare short films from Stanley - including two early 8mm shorts, one of which eventually provided the basis for the feature - a lengthy doc on the making of the film that includes interviews with all of the major players, a lengthy discussion with Stanley on the original plans for a sequel, an audio commentary and extended and deleted sequences. This is truly a stellar release for the film, one fans have demanded for years and one that should put Severin on the map as one of the truly top notch distributors of cult titles.

Wow! Haven't caught this film since its original VHS release. I remember liking it quite a bit at the time though.

This DVD is utter garbage! The film is pan & scan and looks no better than the VHS tape it was obviously mastered from. Ironically, there has been a gorgeous uncut widescreen print on German television a few months back on the MGM channel. Go figure.

Huge fan of Richard Stanley. I wish this would receive a decent release somewhere. Miramax had it at one point in time, I think - and it was scheduled to be released at least once in the US on DVD a year or two ago - but it never arrived.

Stanley's case as a filmmaker really frustrates me. He's well-regarded by fans, filmmakers, and critics; his projects are ambitious in nature and generally very original - yet his efforts over the past decade seem to have either a) been non-starting or b) aren't available (I'd kill to see his two recent documentaries, as well as VOICE OF THE MOON). I'm excited for Nacho Cerda's BLOODLINE in large part because of Stanley's involvment with the film's script.

Here's hoping some of Stanley's long-rumored projects - THE VIY remake, his adaptation of THE GREAT GOD PAN, etc. - either come to fruition or lead to something new.

It's definitely a Miramax property. Ol' Bob and Harv are both credited as producers.

And, yeah, like I say in the review, the DVD isn't great but, for the time being at least, it's the only option I'm aware of to see the film. Maybe this'll get a decent R1 release when Disney clears out the Miramax vault, but I'm not really banking on it ...

I loved this film when I first saw it many moons ago. I've been dying to see a decent release of it.


If it's shown on German television in widescreen and uncut why isn't it copied and put online? Or better yet...why the fuuuuck isn't this out on DVD?

I've got this and the similar German Dust Devil release and they are the best that's currently available.

Thank God then that things (finally) seem to be moving as Fangoria report an extended release of Dust Devil with 3 of his documentaries thrown in as extras (I am looking forward to his one on Haitain vodou - The White Darkness. Also in will be The Secret Glory and Voice of the Moon):

Well, together with the 5-disc Dust Devil DVD this makes a complete Richard Stanley compendium.

I own the Optimum BluRay for Hardware which is very different, enough so that I urge fans of Stanley to buy both if they're into extras.

For starters the commentary tracks are different: the Severin has Stanley talking with the same moderator used on the Dust Devil DVD(s) while Optimum pairs him with producer Paul Trijbits. The Severin commentary discusses sources and inspirations, while the Optimum track discusses the production process in more detail. Trijbits himself has a lot of funny anecdotes as well, especially when he talks about meeting James Cameron who told him what he thought of Hardware (for the record: he liked it, and when Stanley hears this he retorts angrily "Paul, you never told me that!!).

Other differences: the UK Optimum misses the "No Flesh Shall Be Spared" documentary and only has one soundtrack, an LPCM 2.0 (48k) while the Severin has a decent 5.1 remix.

However, both editions feature "Sea of Perdition", "Rites of Passage" and "Incidents in an Expanding Universe". They also share the deleted scenes.

Exclusive to the Optimum UK disc is "Voice of the Moon", a short Stanley shot while hanging with the Taliban, but note that this movie was covered far better on the "Dust Devil" Ultimate Edition DVD, with commentary and a separate interview. Stanley's adventures in Afghanistan were far more interesting than the film "Voice of the Moon" will ever be, so if people want to see this short I'd point them to the "Dust Devil" UE instead.

One of the best extras of the Optimum UK releases is actually not on the disc. Included in the packaging is a booklet which contains (amongst some other interesting things) a reprint of the comic short story "Shok", on which "Hardware" is (loosely) based. Now THAT is a worthwhile addition!