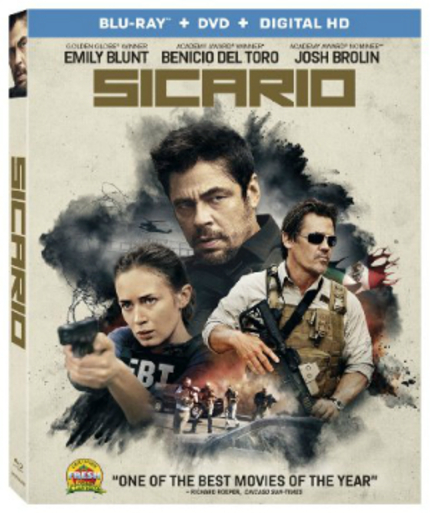 The new year in Blu-ray begins with one, maybe two, clear winners.

Sicario: A top 10 pick of the year, per our writers (including myself), this is a pulse-pounding thriller that should look spectacular on Blu-ray, thanks to Roger Deakins' spellbinding photography. Our own Jason Gorber opined: "On the surface this is a taut, beautifully executed drug drama, and director Denis Villeneuve's talent for keeping tension high is very much on display. Diving deeper, this is a film that tackles deep moral ambivalence, asking questions more than giving answers."

True Detective: Season 2: My high expectations were dashed as the series mumbled and stumbled through a disorienting, disappointing second season, not helped at all by the limited abilities of Colin Farrell, Vince Vaughn, Taylor Kitsch and Rachel McAdams to make sense out of the wandering narrative involving discredited investigators and horrrible crimes. But hey, now it's on Blu-ray, so you can decide for yourself if everyone who had HBO last year was unfair.

The Green Inferno: I agree with most of what Guillem Rosset wrote in his review for ScreenAnarchy about Eli Roth's cannibal movie; he concluded: "The film's intentions are pretty clear from the start, so maybe the worst thing you can say about The Green Inferno is that it won't surprise you ... if it isn't surprising enough to find a film that seems ripped straight from the 80's in today's cinema." On Blu-ray, it's much easier to skip and/or repeat the most gruesome sequences.

Scouts Guide to the Zombie Apocalypse: Teens in the woods; a horror movie. Our own Jim Tudor wrote in part: "Despite its broader shortcomings and nits I pick, a lively and entertaining addition to the overly-saturated zombie sub-genre. I've seen more egregious horsecrap at the cinema this year, even if this can never measure up to the Shaun of the Dead template it is so clearly striving for."

Also of interest to those who like to watch tortured characters on their television shows: Luther: Season 4 (Idris Elba as a tortured police detective); Banshee: Season 3 (tortured souls in the heartland of America).

See a complete list at DVD Talk. Full reviews for selected titles are linked below.

More about Scouts Guide to the Zombie Apocalypse