Now On Blu-ray: Cult Filmmakers Strike Back In BURYING THE EX And LOST SOUL

J Hurtado
Editor, U.S. ; Dallas, Texas (@HatefulJosh)
Tweet Post Submit
Today we've got a brief look at a pair of home video releases that spotlight cult filmmakers who deserve a little moment to shine. While these films are very different in tone and subject, and the filmmakers themselves are also very different in terms of output, the films and releases are indicative of the fact that there are still people out there who want to see what these gentlemen have to say.

Read further for more details and thoughts on Joe Dante's Burying the Ex and David Gregory's Lost Soul: The Doomed Journey of Richard Stanley's Island of Dr. Moreau on Blu-ray.

James Marsh and Todd Brown contributed to this story. 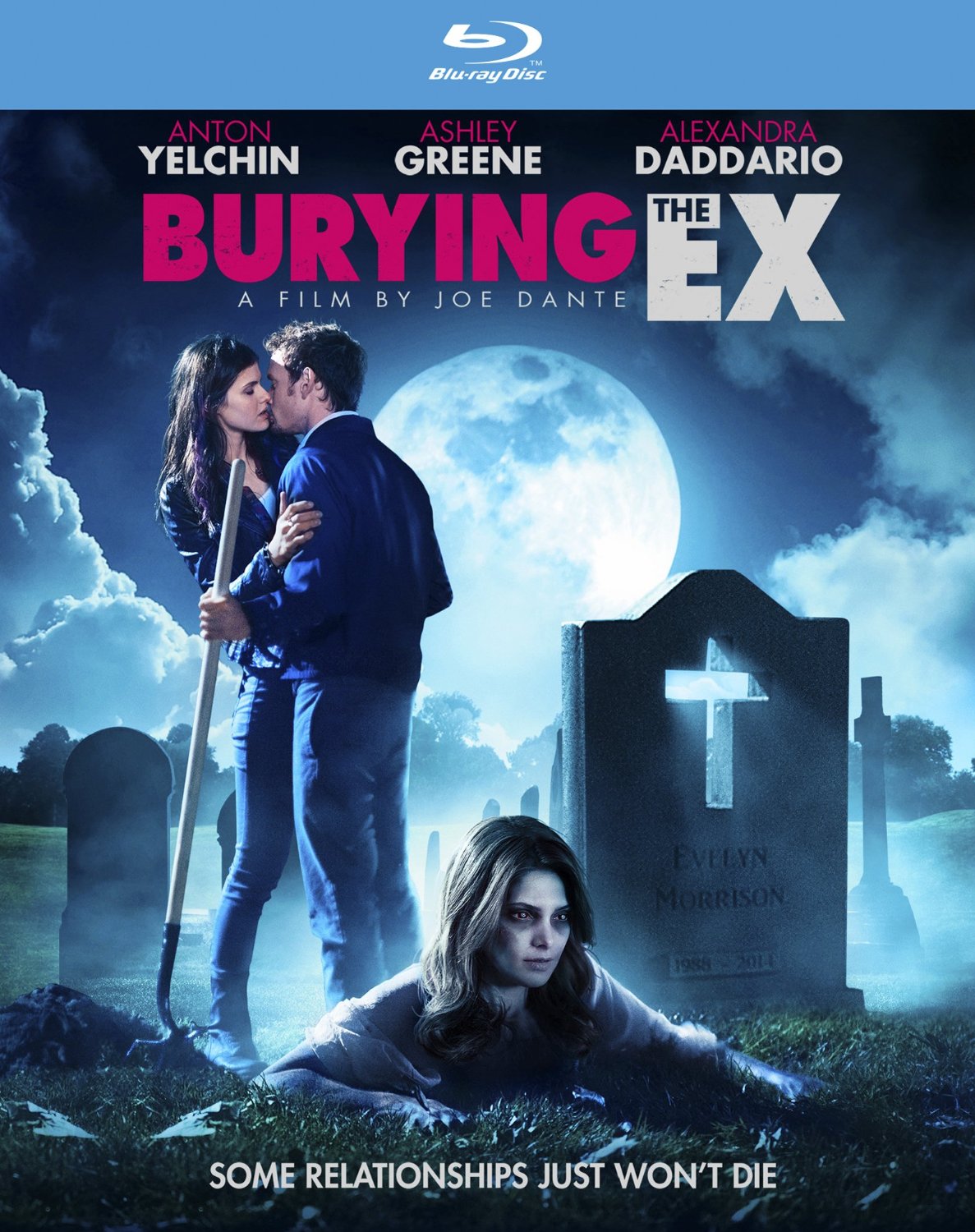 Joe Dante is a filmmaker with deep roots in the cult and exploitation film arena. From his early days cutting trailers for Roger Corman productions in the 1970's through to his '80s successes with cult favorites The Howling, Gremlins and its insane sequel The New Batch, The 'Burbs, Innerspace, and more, Dante has mountains of street cred in the cult film world. However, it's been tough to get a Joe Dante feature produced for a few years, and before Burying the Ex, his last was 2009's unduly ignored childhood horror film The Hole.

With his new film, Joe Dante at least proves to his fans that he can make a movie his way, even if it doesn't reach the magnificent heights of his earlier work. I would compare Burying the Ex, a dark romantic comedy with voodoo zombies, to John Dies at the End, another idiosyncratic film made by a filmmaker (Don Coscarelli of Phantasm fame) for whom most had assumed his best work was in the past. I would also argue that these films are similar in terms of their relative success, though I'd put John Dies as a pretty clear winner, though not by a huge margin. Both are films made by men who have clear visions and modest budgets, and both did it their way, with respectable results.

Todd Brown reviewed Burying the Ex for the Brussels International Fantastic Film Festival, and was less impressed than I was, though he still found some joy:

A triumphant return for a beloved master or a sleepy reworking of now overly familiar tropes in a zombie movement that just won't die? Joe Dante's Burying The Ex is neither, really, the horror comedy showing plenty to say that the director of Gremlins and The Howling still has plenty left in the tank while also being undercut by a script too willing to go for the obvious gag without doing the sort of heavy lifting that would get an audience to really buy in in the first place.

I had fun with the film, though I do agree, there's not much tension in the film, and a lot of the gags are pretty well telegraphed. Still, Dante's sense of humor seems to be coming into fashion again, so let's hope this is the beginning of a strong comeback, not the end.

Image/RLJ's Blu-ray of Burying the Ex is, I should say, a Best Buy Exclusive in the USA. The DVD is in general release, but the Best Buy Blu-ray exclusivity is in place until October. That being said, the disc looks and sounds great. As with most any modern film shot digitally, there are no major distracting elements and I'm satisfied that this great looking disc is as good as we're going to get. On the downside, there is not a single extra, not even a trailer. This bums me out, since Dante is a very engaging speaker as proven through his other DVD extras and his work with Trailers From Hell. A shame. 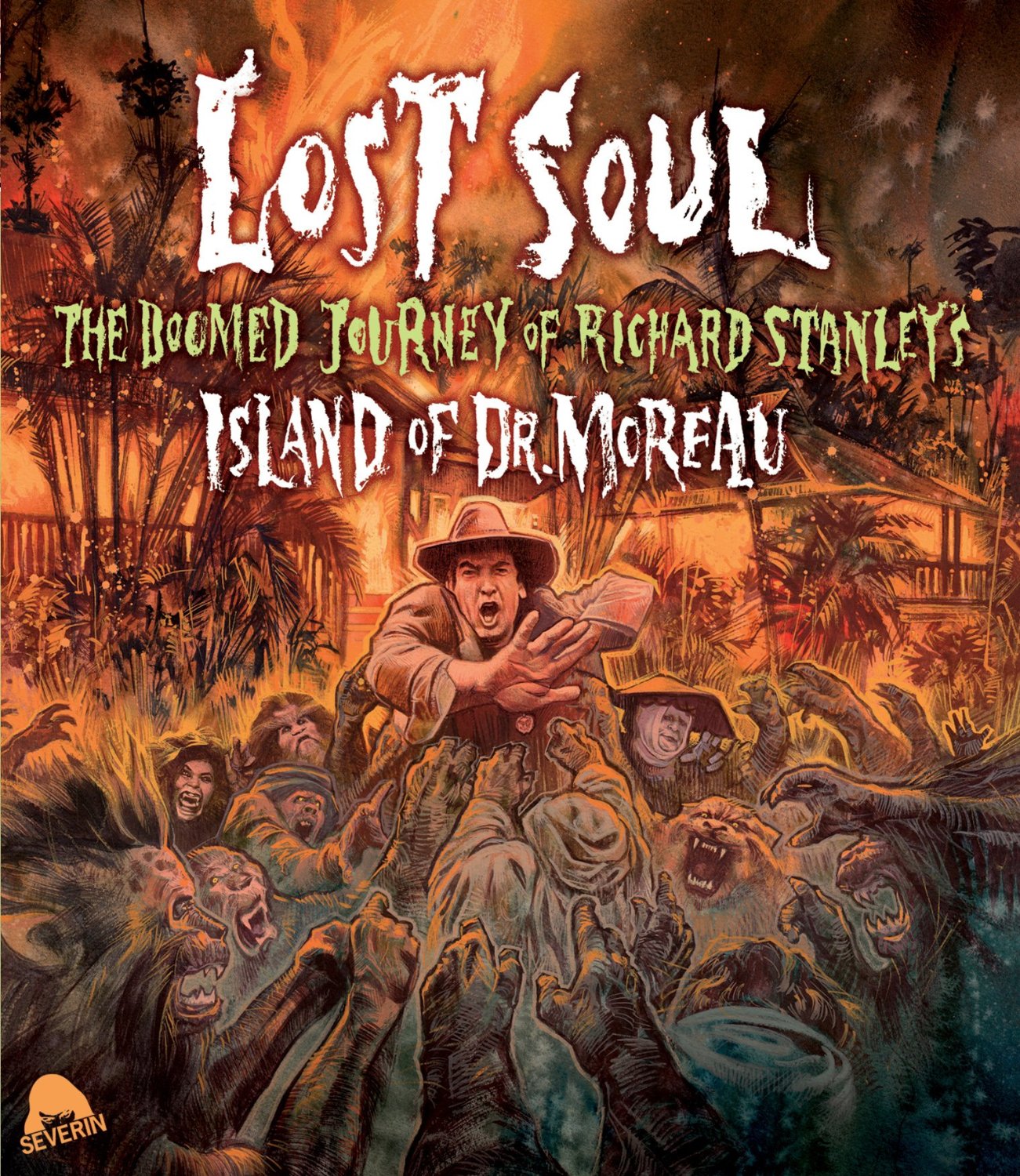 The second cult filmmaker in focus today is Richard Stanley, the director of such legendary cult fare as Hardware and Dust Devil. Stanley's career is an odd beast in and of itself, with numerous stops and starts, including a recent revival by way of the Severin Films produced anthology Theater Bizarre. However, very little is more bizarre than this tale of a visionary director (Stanley) dropped into a production of his own design that gets more and more out of hand as the profile and budget grew out of his comfort zone until he eventually cracked under the pressure.

We've spent plenty of energy relaying our enthusiasm for Lost Soul on these pages, not least of which was James Marsh's review of the film from Fantastic Fest, in which he stated:

One of the more notorious production debacles in recent memory, the maelstrom behind the scenes of New Line's The island of Dr. Moreau (1996) is the subject of this candid and entertaining documentary from David Gregory...

...Told mostly from Stanley's point of view, director Gregory still manages to retain some degree of balance between the story of a visionary artist chewed up by the Hollywood system, and a studio doing what was necessary to protect their investment from an inexperienced filmmaker out of his depth. He is careful to get all sides of the argument, and while some parties are notably absent - Val Kilmer doesn't feature, while eventual leading man David Thewlis is never even mentioned - Lost Soul does feel like an even-handed appraisal of a calamitous situation...

...The themes Wells tackles in his novel remain just as prescient and controversial today as they did over 100 years ago, and as a result it may still be some time before we see a faithful adaptation of The Island of Dr. Moreau on our screens. However, there is no doubt that it will continue to inspire artists like Richard Stanley to attempt it, although it will be some years before the stink of New Line's 1996 version is scrubbed away. In the meantime, Lost Soul: The Doomed Journey Of Richard Stanley's Island Of Dr. Moreau keeps the conversation and the dreams alive, giving audiences a glimpse of the possibilities the story offers, while also showing us yet again the great conflicts and contradictions at the heart of the commercial film industry.

Sorry to grab so much of that review, but it's a really great and thoughtful write up and I hope this impels you to click the link below and read the rest.

I found myself watching Lost Soul with my mouth agape. Anyone who follows films and the politics thereof has no doubt heard stories of studio meddling, hell, we're in the middle of a major story on that very issue right now surrounding Josh Trank and the disintegration of Fantastic Four. However, most of those stories don't involve Richard Stanley, a very likable, though incredibly eccentric man, let alone his relentless creativity and the unavoidable madness that entails. You may have seen a lot of behind the scenes docs, but you have never seen one like this!

Severin has release Lost Soul in two Blu-ray versions, a three disc set and a single disc set. I was sent the single disc set, so my comments refer exclusively to that, though I understand the first disc in either release is identical.

Severin Films' Blu-ray release of Lost Soul: The Doomed Journey of Richard Stanley's Island of Dr. Moreau looks, well, like a documentary. Video quality varies through out the film, which is about 70% talking heads and 30% or less archival footage. The interviews are all contemporary as far as I can recall, and that footage looks perfectly fine. The archival footage is, obviously, of significantly lower quality, largely coming from what looks like on-set tape recordings made by cast and crew. A lot of that footage is quite dark, but the fact that it exists at all, based upon the stories behind the film, is a goddamned miracle, and I applaud director David Gregory for bringing it to light. The audio is straight forward and clear enough to understand everything as well as is needed. No damage appears in either the video or audio.

In terms of extras, obviously the single disc edition has significantly fewer than the deluxe edition, however, there's still plenty to enjoy. There is about an hour of extended interview material with Stanley, who is nothing if not completely open, as well as extended interviews with concept artist Graham Humphreys, actor Marco Hofschneider, and more. There is a guided tour through the jungle with some of the original crew to uncover the overgrown original Australian locations for the film. There is a wonderful Richard Stanley narrated tour through some of Humphreys' wildly imaginative concept art that really makes you wish we'd been able to see that film. There is an archival interview with the late John Frankenheimer, who ultimately took over completing the film, in which he acknowledges some of the shortcomings of the production. There is an audio interview with horror legend Barbara Steele who talks about her experiences on the project, as well as a short featurette on Richard Stanley's appearance at Mexico's Morbido Fest, and a reading of the Boar Man Diary, in which a member of the cast recounts some of his experiences (this one's kind of dull). Pretty hefty set of extras, but for a company that got its start creating bonus material (Severin Films), I would expect nothing less. Definitely recommended, but I'd probably grab the 3 disc edition if given the choice.

Do you feel this content is inappropriate or infringes upon your rights? Click here to report it, or see our DMCA policy.
blu-rayburying the exdavid gregoryjoe dantelost soulrichard stanley