Night Visions 3015: Hell Up In Helsinki

Earlier this month I went to the future. I mean this somewhat literally, as my flight from Toronto to Helsinki, Finland put me 8 hours ahead, but also because I was attending the Night Visions Film Festival, a biannual celebration of genre cinema that endearingly dates its Halloween editions 1000 years into the future (there's also a June edition that sets its date in the 21st century).

This tradition goes back to the festival's inauguration in the late 90s, when the late Mike Vraney and Lisa Petrucci visited Helsinki with a programme of Something Weird titles. Despite preceding the new millennium, the programme was billed as "Something Weird 2000," anecdotally because Vraney thought 2000 sounded so much cooler.

Mikko Aromaa, the editor-in-chief of GoreHound, a popular genre film zine in Finland at the time, agreed and as festival director of Night Visions, he cast subsequent fall editions of the festival in the year 3000. Fifteen years later, here I was, experiencing a barrage of horror, sci-fi, and all-around weird cinema at the Maxim Theatre in the heart of Helsinki, and having a damn good time.

A casual glance at the "Night Visions Maximum Halloween 3015" programme and any
genre film connoisseur will be quick to recognize a robust ensemble of the year's most popular genre fare, from the blood-soaked Kiwi festival favourite Deathgasm to the American love letter to Fulci-style spook-em-ups We Are Still Here, but the devil's always in the details and upon immersing (and indulging) myself in the festival's offerings (both inside and outside the cinema) over my four and a half days in the 30th century, I came to observe more then a few elements that elevated the proceedings from a typical genre fest experience.

Scroll through the gallery below to hear about some of them! 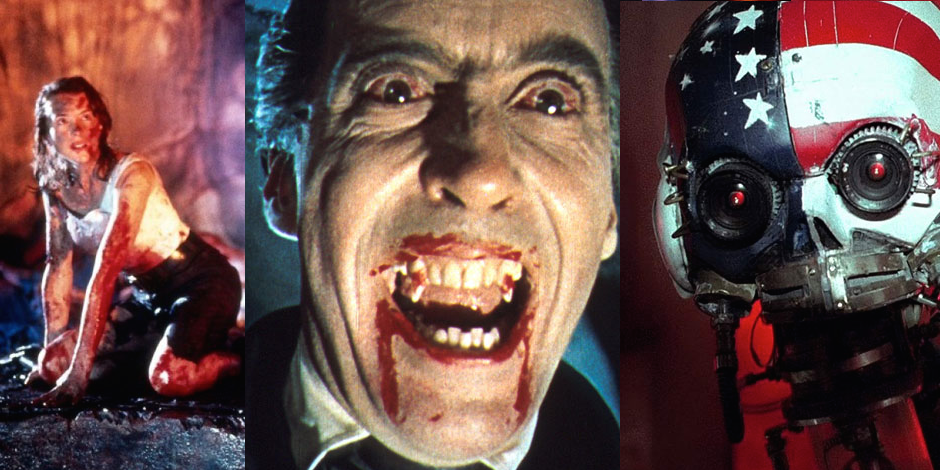 Retrospective screenings can be a hard-sell as festival audiences are typically hungry for the latest and greatest, with older fare sometimes taking on the stigma of a vegetable garnish on a steak plate. Fortunately, from my perspective, the denizens of Night Visions were enthusiastic to eat their broccoli, with sizeable and enthusiastic audiences turning up to the festival's vintage programming.

And with good reason, as this year's retro offerings were anchored by special guests Brian Yuzna and Richard Stanley, both of whom were on hand to introduce and answer questions following pristine 35mm presentations of their work. I was particularly delighted that while their more notable works were covered (Yuzna's Society, Stanley's Hardware), we also got to see Richard Stanley's 2001 documentary on SS officer Otto Rahn's fixation with the search for the Holy Grail (The Secret Glory) and Yuz na's delightfully gooey and underrated anthology of (very) loose Lovecraft adaptations Necronomicon (with segments directed by Christophe Gans and Shusuke Kaneko).

Complimenting these two career retrospectives were in memoriam screenings of The Wicker Man and A Nightmare on Elm Street for Christopher Lee and Wes Craven respectively, plus an amazing presentation of Lee's seminal turn as Dracula in Terence Fisher's 1958 Hammer adaptation on an immaculate archival print, preceded with candid footage of Lee's previous visit to Night Visions in 2002 when the festival curated a Hammer Film retrospective. 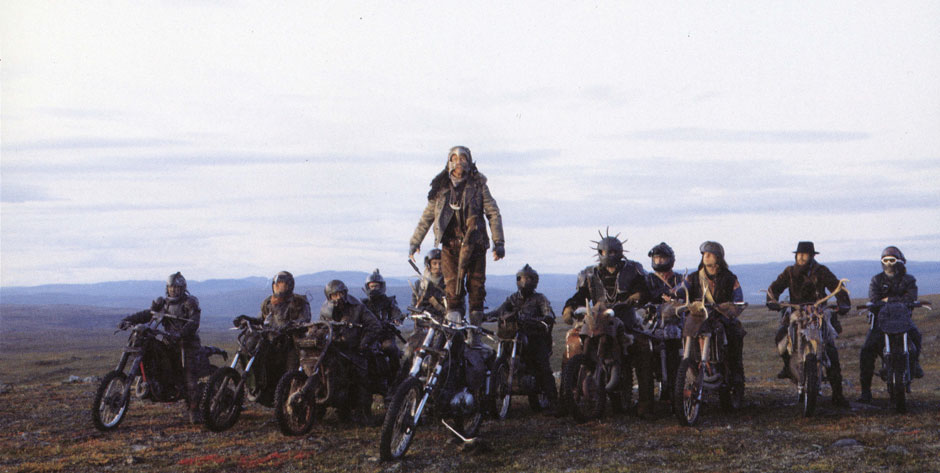 As a celebration of genre cinema, Night Visions also asserts a unique identity through its commitment to Nordic genre cinema, which extends across both its contemporary and retro curation. This year's lineup included the Danish zombie drama What We Become and the sequel to the seminal Norwegian fright flick Vilmark, which trades the dark and deep woods of the original for a foreboding abandoned asylum.

However, what turned out to be the most intriguing Nordic edition to the programme (and which I was remiss to mention in my praise of the retrospective programming) was in fact the 1993 post-apocalyptic Western the festival screened on opening night! Directed by Mike Karusimäki (brother of Aki), and staring Jürgen Prochnow, The Last Border, is a kind of Finnish take on Mad Max, much in the tradition of Enzo G. Castellari's Italian radioactive wasteland pictures of the 1980s. Though disappointingly light on action, and a somewhat stodgy with regards to characters and plotting (it hews strikingly close to the cliches that are pastiched in Turbo Kid), Karusimüki nonetheless manages to imbue an entertaining eccentricity to the proceedings, adorning the film's mythic tropes with a decidedly Finnish... well... finish.

Goliath punks with names like Duke and Skunk ride motorcycles through the desolate, but beautiful Laplands (actually Norway's Finnmark County), terrorizing the Sami people at the behest of an off-screen corrupt government who suspect the region of harbouring a resistance movement. The cast is rounded out with actual members of the Finnish chapter of the Hell's Angels (some of whom were in the Night Visions audience for the screening), the score is a wall of Finnish trash metal courtesy of the bands Stone and Harri & The Mule Fukkers, and the film even bookends itself with fly-bys of Finnish Air Force jets. There is also whole lot of reindeer (at one point wryly used as a visual euphemism for sex).Though by no means a great exemplum of the genre, it turned out to be a worthwhile curiosity and one made all the more entertaining when viewed on 35mm in at the Maxim Theatre.

Another compelling, if atypical Nordic entry in the programme, was the documentary Spandex Sapiens. A locally produced feature-length exploration of Finland's wrestling leagues, it pivots around rising Finnish/Canadian wrestler Michael “StarBuck” Majalahtim, and his clashes, both in and outside the ring, with rival, transgendered wrestler Jessica Love. The result is an oft funny, but also uncomfortably candid examination of the subject's transphobic prejudices (having grown up the son of a preacher), as he struggles to re-define his values, accept Jessica and find love in his own life. It's not a film one would typically expect to see in a genre film programme, but that the film took home the festival's Audience Choice Award is only a further testament to the festival's support of home-grown efforts.

Such enthusiasm and validation of locally produced films should really be no surprise, as Night Visions extends its support to Nordic genre films outside the festival and throughout the year through the Nordic Genre Invasion project (official site here), headed up by the festival's director Mikko Arromaa, and designed to help foster a community of Nordic genre filmmakers and help connect their films to worldwide audiences.

Adorning the lobby of the festival's main venue (the Maxim Theatre), were incredible sculptures and pop-up art-pieces created by Jessica Koivistoinen and Minja Tuomisalo. Each work was inspired by the festival's line up and made for great line-up eye-candy.

There was Stacey Travis' Mark 13 sculpture from Hardware, a wall-bust of Jürgen Prochnow's villainous turn in The Last Border, and even a sculpture of Screaming Mad George's unforgettable butt-on-face creation for Yuzna's Society, complete with a hole meant for fans to stick their own head through, so as to encourage some Society selfies.

Myself and writer/director/composer/probably-caterer Bennet Jones were also blown away to find that the artists had gone so as far as to even re-create the painted guitar from his cult indie musical I Am A Knife with Legs.

Despite there rarely being a minute when something worth watching wasn't being projected (the festival does conclude with an over-night movie marathon, after all), there were a number of terrific off-site festivities that have me enthusiastic about returning. Following the opening night festivities, which included the screening of The Last Border, the audience was invited to head over to Corona Bar & Moskova Bar, two connected bars, both owned by the Karusimäki brothers. Moskova Bar was a particular treat, as its a kind of art-project: a satirical tribute of Soviet aesthetics, complete with poorly maintained, flickering florescent lights and the use of the Brezhnev speeches to clear the bar at closing time.

The Moskova Bar was also the site of a pretty incredible coincidence, as Brian Yuzna noticed a plaque with his signature on it and then realized that not only was it an award that he forgot he awarded to Mika Kaurismäki's Three Wise Men years ago while on the Tallin Black Nights Film Festival jury, but that the film featured scenes shot at this very bar. Needless to say, in between the shots of salmari and bottles of Long Drink, their brains were blown by the connection.

Things got more interactive following the premiere of Spandex Sapiens as the audience was subsequently whisked to a Finnish wrestling show where the subjects of the documentary fought it out in the ring. Canadian flags were even present in support of Starbuck, as he originally hails from Timmins, Ontario, Canada.

Then on Saturday night, myself and the Night Visions audiences got our synapses shattered in the basement club of the Karusimäki Corona Bar, by the hypnotic multi-media presentation Texas Chainsaw Massacred, which saw two projectionists remix the seminal Tobe Hooper horror film by projecting the film on 8mm reels simultaneously across four projectors. The experience was reminiscent of Shining Backwards & Forward, only with a much more aggressive soundscape, that at one point seemed to also be incorporating the sound from an 8mm digest print of Star Wars.

This mind-melter was then followed by a special appearance of a Kalevi Helvetti (or Charlie Hell), a Dracula-looking dude and horror alter ego of Petrri Kurikka, the leading member of a Finish punk act comprised of developmentally disabled performers, and which represented Finland at the 2015 Eurovision Song Contest. If that wasn't enough, International Pop Superstar Benè popped by for a brief set of musical blue balls – playing a series of first verses and never an entire song, while dressed in a one-of-a-kind Night Visions ab-hole t-shirt. Those of you privy to the inspired lunacy of I Am A Knife With Legs will know what I'm talking about. 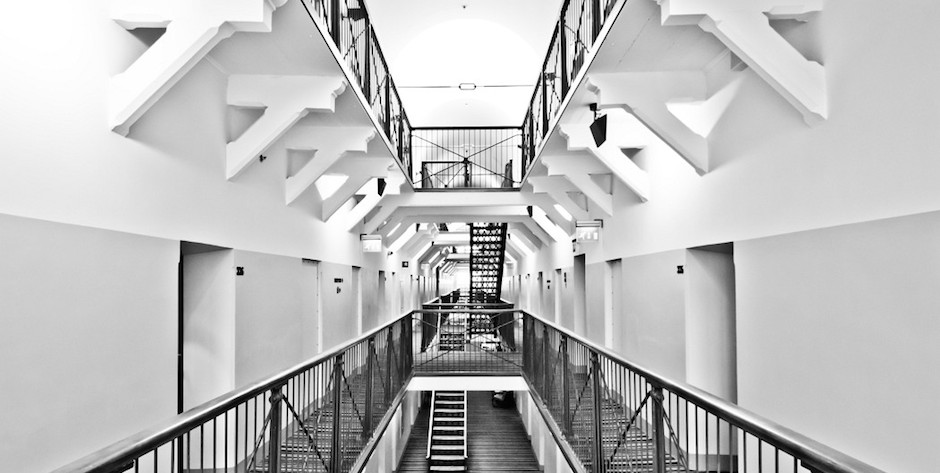 Go to Helsinki and Go to Jail

If the movies (both contemporary and canonical), the parties, and all the wonderfully creative details that Mikko and his team put into "Night Visions Maximum Halloween" each year aren't enough to entice a flight to Helsinki for a week full of genre-fun, consider the accommodations that you might have!

First of all, when you fly to Helsinki, you will have the opportunity to stay in a converted prison! I can't confirm, nor deny how haunted it is, but the Best Western Hotel Katajanokka (official site) is indeed a former prison with a foundation dating back to 1837 and a history as a penitentiary spanning as long as until 2002!

I found the interior architecture to be reminiscent of the prison from Robert Bresson's A Man Escaped, albeit with all the trimmings and comforts of a modern hotel, and needless to say I was geeking out at the novelty of the experience. It was particularly cool to notice that the prison garb on display in the lobby was the same outfit the ex-con protagonist of Mika Karusimäki's The Last Border sported in his early scenes in the film.

The hotel is also just the right amount of distance from the Maxim Theatre and the bars to encourage late night walks through the streets of Helsinki following a 3:30 AM last call, that is, unless you've committed to the festival's concluding overnight marathon. (Did I not mention, the festival wraps everything up with a 12 hour sprint of cinema?)

All things accounted for, I'll definitely be finding a way to incarcerate myself again at Hotel Katajanokka for another instalment of Night Visions.

More about I Am a Knife with Legs