Review: THE GREEN INFERNO, A Satisfying, If Not Surprising, Cannibal Ride 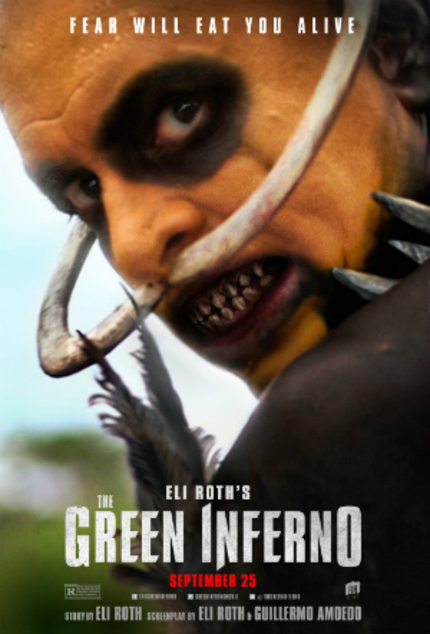 It's been more than ten years since Cabin Fever left fans wanting for more, with some claiming Eli Roth to be the new am Raimi. Fortunately Hostel proved that Roth was indeed on the right track to become an essential name in horror cinema today. So it's only natural that the anticipation has been running very high for Roth's The Green Inferno, a love letter to the sub genre of cannibal films as made famous by Italian 70's and 80's classics such as Cannibal Holocaust.

The premise for the film is quite simple. Justine is a young and idealistic girl from a wealthy family who wants to do something more with her life. So she decides to join Alejandro, a charismatic young man leading a small NGO, and other people from her college on a trip to the Peruvian jungle in an attempt to stop the bulldozers from destroying the jungle and to help indigenous people keep their traditional lifestyle.
They manage to succeed in their mission, using social media and the internet to raise awareness of the issue and putting a halt to the operation. But as they prepare to return to their country, something goes wrong and their plane ends making an emergency landing in the middle of the jungle, where they encounter a local tribe that seems to be more interested in serving them for dinner than thanking them for their support.

With the film's running time around 100 minutes, Roth spends quite some time letting us get to know -- or should I say get to hate? -- the characters before sending them into chaos. So when madness begins and blood starts flowing it's easy to feel some cruel satisfaction for their deserved fate. And believe me, there's plenty of blood here, thanks to the magnificent work of gore legends Greg Nicotero and Howard Berger. Making use of practical effects, the duo manages to deliver everything that you could expect from the film's premise. And I can tell you that there's enough blood and gore here to keep every fan of the genre satisfied, but always served with the right amount of dark humor to prevent ever becoming disturbing in a bad way.

Roth has put together a crew comprised mostly of Chilean filmmakers, so even though the film is an American production, he has managed to achieve an unique atmosphere and look that fits perfectly with the mood and gives the jungle scenes the right sense of oppressive craziness, and not something looking like a typical Hollywood production. The cast of actors is led by young Chilean actress Lorenza Izza, and overall they manage to do a solid job, given the circumstances. The script, co-written by Eli Roth, Guillermo Amoedo and Nicolás López (who's also producing) is as straightforward as you could expect and there's not much room here for character exploration. Well, if you don't count dismembering and guttering as "character exploration", that is.

The film's intentions are pretty clear from the start, so maybe the worst thing you can say about The Green Inferno is that it won't surprise you ... if it isn't surprising enough to find a film that seems ripped straight from the 80's in today's cinema. So if the premise of Eli Roth's new movie seem attractive to you, the chances are that you will probably enjoy this bloody ride. I can assure you that I certainly did, as did a packed theater full of genre fans in Sitges. There's no doubt that fans will be eagerly waiting for whatever comes next from Eli Roth's disturbed mind.
Review originally published in slightly different form during the Sitges Film Festival in October 2013. The film opens in select U.S. theaters on Friday, September 25.