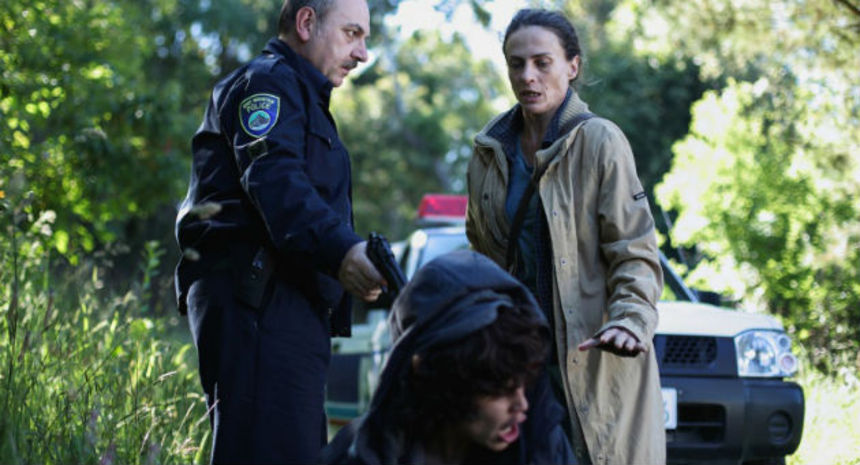 Directed by Guillermo Amoedo and executive produced by Eli Roth and Nicolas Lopez (who collaborated on Aftershock, The Green Inferno, and next year's home invasion thriller Knock, Knock with Keanu Reeves), The Stranger is a vampire film that doesn't scream that it's a vampire film. In fact, it's very similar to the best parts of Kathryn Bigelow's Near Dark.

Cristobal Tapia Montt stars as the titular brooding stranger Martin, who appears at the house of Monica (Alessandra Guerzoni), a mostly irate nurse, and her son Peter (Nicolas Duran), a nice young kid. Martin inquires as to the whereabouts of his ex-lover Ana, and upon being pointed to the cemetery, harbors a severe death wish after learning that Ana has died. Morose and still as a statue, Martin lets himself be attacked by a group of thugs led by Caleb (Ariel Levy) who are less a gang, but more overgrown bullying man-children. While we expect him to snap into action after a certain amount of beating, Marti lets himself be stabbed and dumped into a pit, aided by the corrupt local police lieutenant (Luis Gnecco), who is the father of the worst of the thugs.

Things get even more violent when the lieutenant learns that Martin's "contagious" blood has healing powers, and the film becomes a virtual bloodbath full of meanness. Throughout the film, there are cringe-inducing moments, gruesome special effects, sometimes done better in certain scenes than others. There are cop-shoot-cop moments, people burning alive, vampires succumbing to the sun, an impending death by gasoline immolation, needle-fu, and other assorted bits of nastiness.

A big issue for the film is the dubbing; shot in English, one still gets the sense that this is a Spanish-language film but that it's not quite Spanish, and not quite English, and an unspecified locale. The acting is generally all over the place; Cristobal as Martin puts in a very good performance, but other characters, particularly Peter's "mother" Monica give one-note performances that descend into melodrama.

While I can't say for certain, female characters are very often written and directed flatly; they are the impetus for the main male lead and need to be saved, or they are the femme fatale, angry, grating harpy (as she is in this case), or helpful, pure woman. My guess is that this angry mother role didn't give the actress much room to explore further depths; however, a true talent would have been able to get away with more nuance.

Overall, The Stranger is a mixed bag but worth checking out.

Do you feel this content is inappropriate or infringes upon your rights? Click here to report it, or see our DMCA policy.
Eli RothGuillermo AmoedoNicolas Lopez