Charlie Hobbs
Contributing Writer; Texas, USA
Tweet Post Submit
Since 2006, Texas Frightmare Weekend has been the place to be for horror fans in the southwest United States. From founder Loyd Cryer's humble beginnings at the Grapevine community center to its current home at the DFW Hyatt, this is one convention that gets bigger and better every year. One thing that we at ScreenAnarchy don't often get a chance to talk about are conventions, because while they are very popular among horror and sci-fi fans, there's not typically a lot of news to report.

Texas Frightmare Weekend is among the standouts in this regard, as they place a high priority on their screenings and getting the kind of films that horror fans want to see. This tenth anniversary event, scheduled for May 2-3, is no different. There is even an unusual and welcome focus on documentaries this time around, with a couple of films about which we've been effusive for some time. In addition to those, there are also some gory and gruesome fan favorites and festival picks that look like they'll be well worth your time.

Take a look at the film selection below and let us know what you're most excited about! 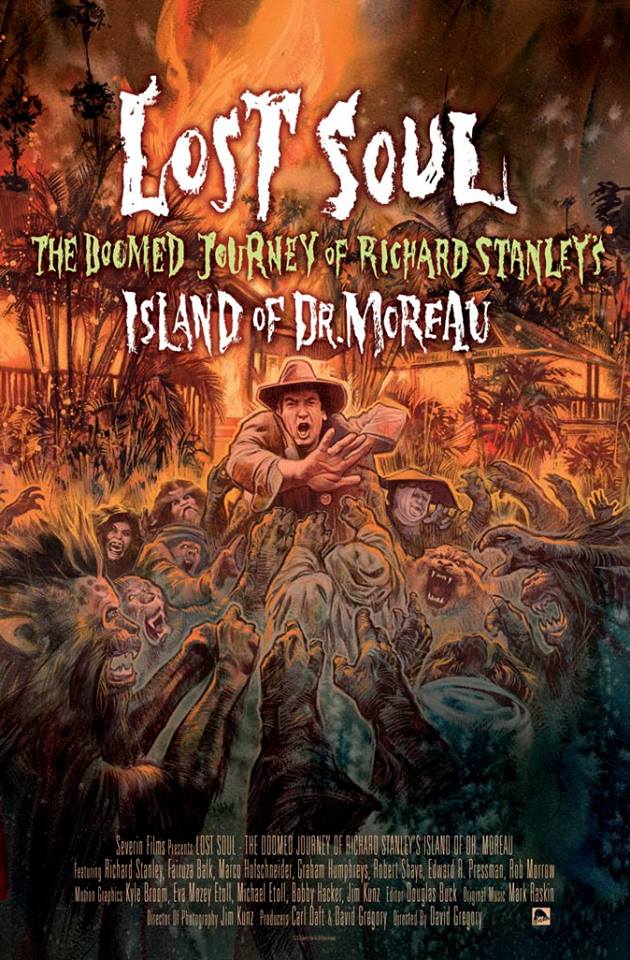 First up on our must-see list is David Gregory's Lost Soul: The Doomed Journey of Richard Stanley's Island of Lost Souls. While the film's title may be more than a little unwieldy, it certainly tells is like it is. This film has traveled the world and been the belle of many a ball while making its way to Dallas. Our own James Marsh had this to say after witnessing the film's premiere at Fantastic Fest 2014:

The themes Wells tackles in his novel remain just as prescient and controversial today as they did over 100 years ago, and as a result it may still be some time before we see a faithful adaptation of The Island of Dr. Moreau on our screens. However, there is no doubt that it will continue to inspire artists like Richard Stanley to attempt it, although it will be some years before the stink of New Line's 1996 version is scrubbed away. In the meantime, Lost Soul: The Doomed Journey Of Richard Stanley's Island Of Dr. Moreau keeps the conversation and the dreams alive, giving audiences a glimpse of the possibilities the story offers, while also showing us yet again the great conflicts and contradictions at the heart of the commercial film industry.

Director David Gregory will be on hand at Texas Frightmare Weekend for the film, as well as hawking his wares as one of the co-founders of Severin Films. 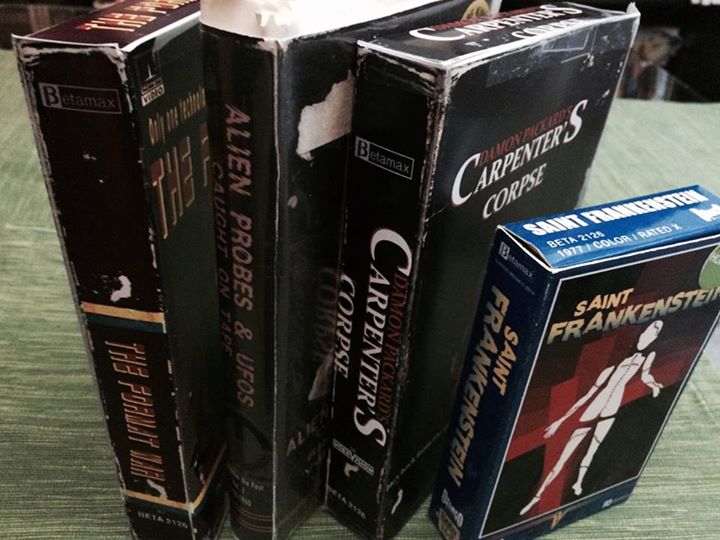 This film features a lot of talent getting an opportunity to spread their wings in a small way, and kudos to Intervision for producing and Texas Frightmare Weekend for giving it a venue. 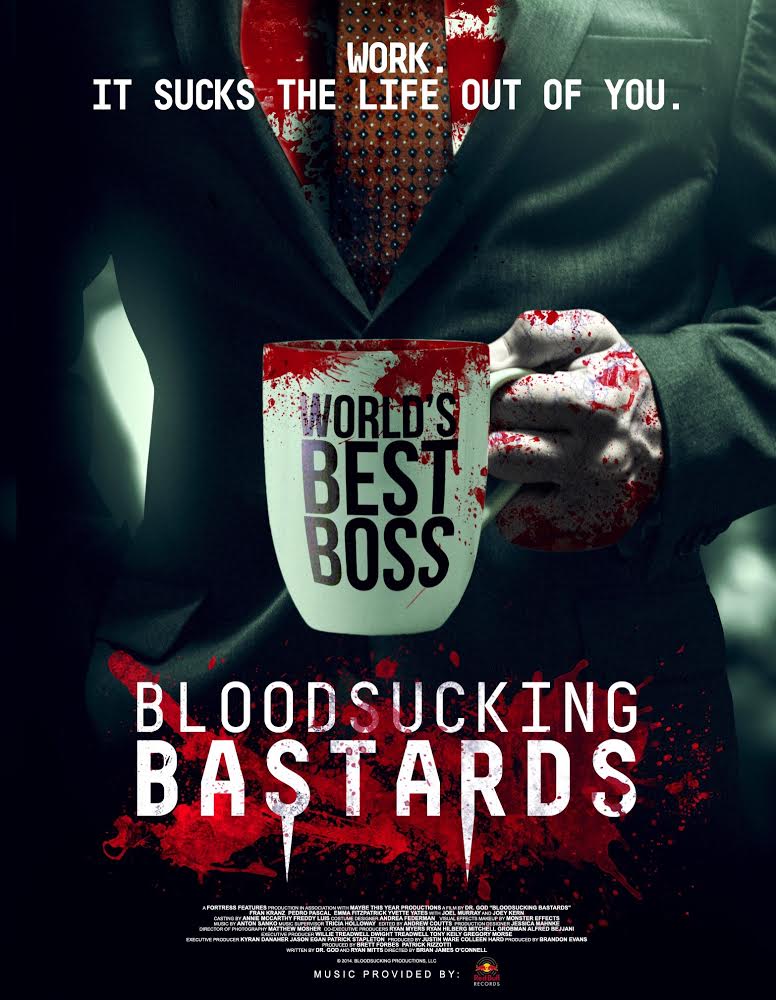 Slamdance alum, Bloodsucking Bastards is also on the screenings list for this year's TFW anniversary. The film, directed by Brian O'Connell, has garnered some positive word out of this year's Slamdance event and I'm excited to see this workplace horror-comedy that looks like a mix between Office Space and Shaun of the Dead. Here's the trailer to give you a taste... 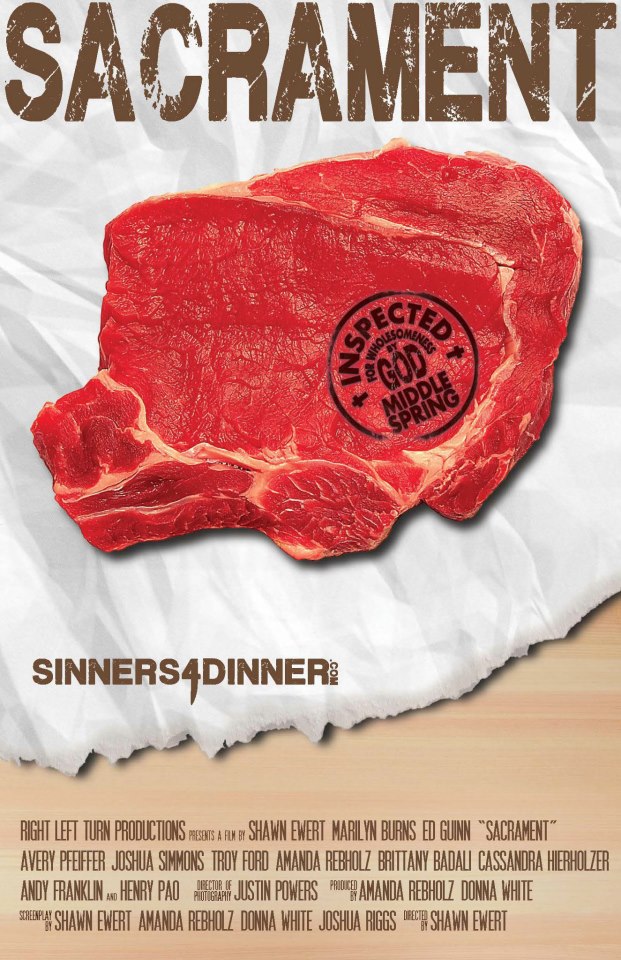 Next up is a homegrown Texas horror film, Sacrament, written and directed by Shawn Ewert. The film looks like a micro-budget take on the crazy religious cult genre crossed with a cannibal film, and it could turn out to be a lot of fun. The filmmakers describe Sacrament as:

Leaving the city behind for a weekend of booze, bud and bonding at the coast, seven friends find themselves stranded en route to South Padre Island when a big storm interferes with their plans. The town of Middle Spring is more than happy to welcome them with open arms, however; located in the rhinestone buckle of the Bible Belt, Middle Spring is smack-dab in the middle of a big barbecue and tent revival and there's always room at their table for a few more warm bodies.

Unfortunately, no one in Middle Spring is exactly who they seem to be--- this town takes the Bible quite literally, and the friends have to stick together as time begins to run out and they realize that what's on the menu may be closer to home than they suspected. 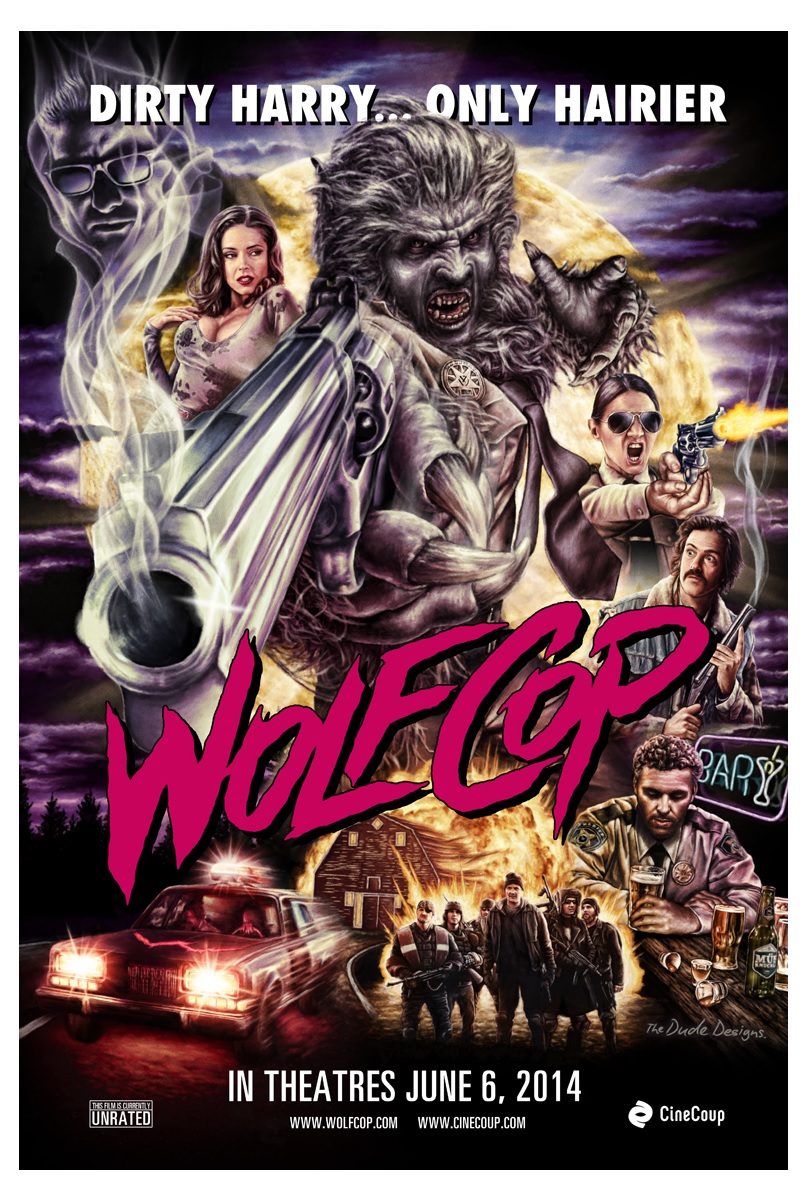 Known around these parts for its incredible title, premise, and amazing key art from Tom "The Dude Designs" Hodge, Lowell Dean's Wolfcop is the next addition to TFW's screening line-up. Andrew Mack has been on the case since the very beginning and his review bodes well for TFW attendees:

Emerson Ziffle's practical creature effects are top shelf. They will delight old school horror fans and should find favor with werewolf enthusiasts. Lou's first transformation starts where no werewolf transformation should but the result is hilarious. As the werewolf, Lou slashes and claws his way through a number of bad guys and the gore goes for comedic effect over horror. A werewolf movie makes it or breaks it on the strength of the creature effects and I do not think a single werewolf fan will be disappointed with the efforts here.

Fans of horror comedies should find enough of both in Wolfcop to feel like they are not leaving the cinema empty handed. My hangup is that Wolfcop takes so long to find its purpose that all we are left with is a couple of shakedowns before the climax. It is a mix of horror and comedy that does not take off right away but builds momentum to a satisfying conclusion. I like to think that because Wolfcop is a low-budget production it meant that Dean had to put some of his crazier ideas on the shelf. Now that a sequel has been approved hopefully Dean can be more ambitious with his next screenplay; open up that can of crazy as he explores more werewolf tropes to fiddle with. There is room to really let his werewolf's hair out, and that is promising. 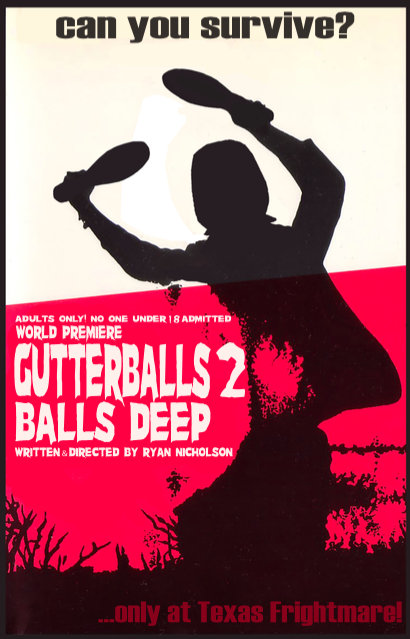 Also coming to Texas Frightmare Weekend, and having its world premiere, is the sequel to the cult classic adult horror film Gutterballs, Gutterballs 2: Balls Deep! Writer/director Ryan Nicholson will be in attendance for this highly anticipated premiere which will be open to adults over the age of 18 only.

The original Gutterballs was the little film that could, garnering equal numbers of repulsed and warm reviews for its gleefully and intentionally over the top content. The sequel promises even more of all of the violence, nudity, and dowright nastiness that had fans of the first film clamoring for more. 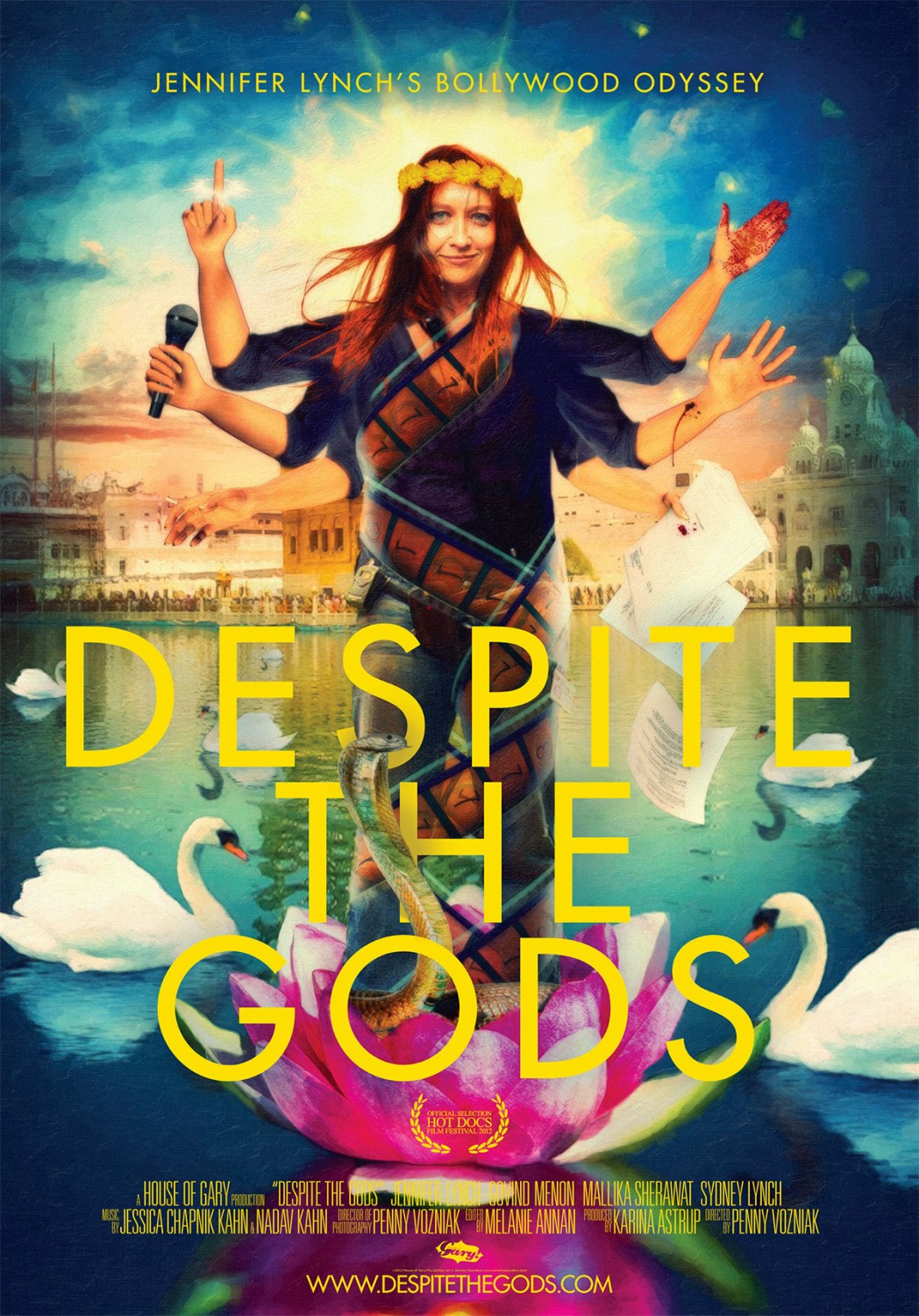 Last, but certainly not least, is Despite the Gods, a documentary charting the creation of Jennifer Lynch's (Chained, Boxing Helena) Bollywood horror debacle Hisss. Kurt Halfyard saw the film at HotDocs back in 2012 and here are some of his thoughts:

Lynch admits at one point, that if you have to have problems in life, they might as well be film-making problems - it's all relative, and nobody dies of cancer on set or anything - and Despite The Gods goes a long way to putting that into perspective in a compelling and colourful way. Like any documentary of this sort, there is a lingering desire to see the director's hinted at, by the very producer who re-cut it, 'languid, sensual, European edit.' I am betting that it is indeed miles ahead of the 'lost in translation' sledge-hammer version that was foisted on an unsuspecting Indian audience and pulled from every major genre-festival in the world and never released theatrically in North America. I would love to see it, if only to answer the question, "Isn't it beautiful?"

Jennifer Lynch will be in attendance to talk about Despite the Gods and Hisss, and will also take part in a roundtable discussion with fellow director Jovanka Vukovic (The Captured Bird, Jacqueline Ess) to talk about their upcoming all-female directed horror anthology XX.

More about Despite The Gods