Hey, Glasgow! Get Ready For The FrightFest Invasion! 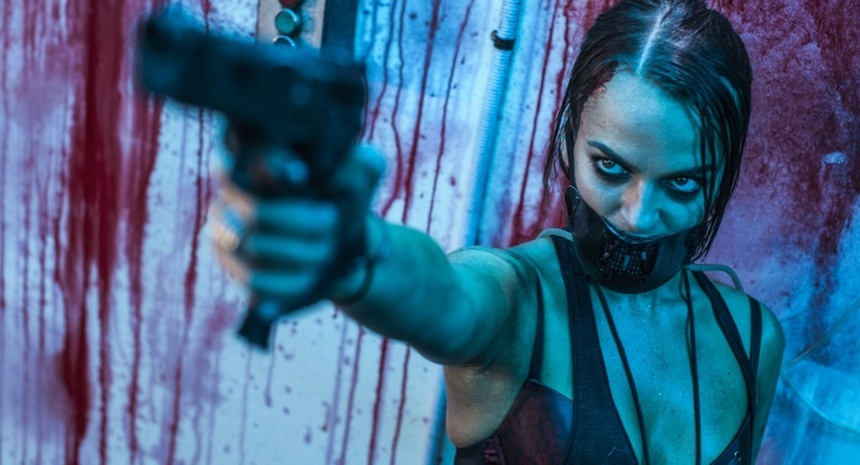 London's premiere horror festival will be making its way to its second home, to bring a weekend of chills and thrills to Glasgow! Celebrating its 10th year in the north in conjunction with the Glasgow Film Festival, this fabulous FrightFest weekend will include three world premieres, as well as some European and UK premieres.

I've only seen two of the new features, but can recommend both Wyrmwood, a bonkers, rough-and-ready zombie film from Australia, and [Rec]4: Apocalypse, a fun tie-up to the legendary zombie franchise. I can also recommend the retro screening of Mario Bava's Blood and Black Lace, an early Giallo classic.Other interesting-looking titles include Brad Anderson's Eliza Graves, and 88 starring Katherine Isabelle.

Full disclosure, I am the shorts programmer for FrightFest, and have two selections playing. Full details of the weekend are in the press release below.

Kicking off with a special screening on Thurs 26 Feb and hosting eleven films on Fri Feb 27and Sat 28 Feb, the UK's favourite horror fantasy festival celebrates ten 'gore-ious' years at its second home at the Glasgow Film Festival with an all-exclusive slate of the freshest new horror films around.

Friday's fearsome line-up kicks off with the European premiere of THE ATTICUS INSTITUTE, the paranormal activity shockumentary of the year, written and directed by  Chris Sparling, who wrote 'Buried'. This is followed by the World Premiere of THE HOARDER, starring an on-form Mischa Barton who uncovers the worst horrors in the dank depths of a storage unit facility. Next up is the riotous WYRMWOOD, the zombie black comedy full of catastrophic carnage and over-the-top splatter. From Australian brothers Kiah and Tristan Roache-Turner, it's the deadpan bloodbath everybody is talking about. The 9pm slot goes to 88, a glorious, gory and fast-paced homage to cult exploitation revenge thrillers. This is the World Premiere for April Mullen's most graphic film to date, starring American Mary herself, Katharine Isabelle. Rounding off the evening in terrifying style is the European Premiere of THE ASYLUM (BACKMASK) - in which Marcus Nispel, director of 'The Texas Chainsaw Massacre' and 'Friday The 13th' remakes. takes us through a rampant landscape of sex, drugs and rock 'n' roll possession.

Getting the Saturday programme off to a nerve-jangling start is the UK premiere of the much anticipated and very disturbing CLOWN, produced by Eli Roth.  This is followed by FrightFest's popular retrospective slot which this year is Mario Bava's BLOOD AND BLACK LACE, one of the most influential genre movies of all time; this will be preceded by the Scottish premiere of short film THE STOMACH, which won first prize in the Horror Shorts section at Fantastic Fest 2014. Next up is the World Premiere of THE WOODS MOVIE - a behind-the-scenes exclusive reveal to everything you ever needed to know about how 'The Blair Witch Project' was produced, shot and marketed to become a groundbreaking blockbusting classic. This has been directed, edited and scripted by Russell Gomm, who is a long-serving member of the FrightFest TV crew.

Saturday evening unfolds in gut-wrenching style. Mo Hayder is one of Britain's most acclaimed crime authors, but it took the Flemish Film Industry to turn her bestseller THE TREATMENT into a smash Euro success and FrightFest is pleased to present the UK Premiere of this harrowing serial killer thriller. This is followed by a real treat...FrightFest unleashed the Spanish sensation [REC] onto unsuspecting audiences in Glasgow 2008 and  the organisers are delighted to host the UK Premiere of Jaume Balagueró's [REC]: APOCALYPSE, the shattering visceral conclusion to the global horror phenomenon. And to end the FrightFest carnival of carnage is the UK premiere of the creepy, brain-freezing THERE ARE MONSTERS, an instant cult classic and one of the scariest 'under the radar' movies of the year.

With special guests, surprises on screen and off, new short films showcase surprises and the festival's unique community feeling, FrightFest at GFF has now become a must-attend occasion on the horror fantasy fan's calendar.

The festival's guest line-up will be announced shortly.

More about The Atticus Institute