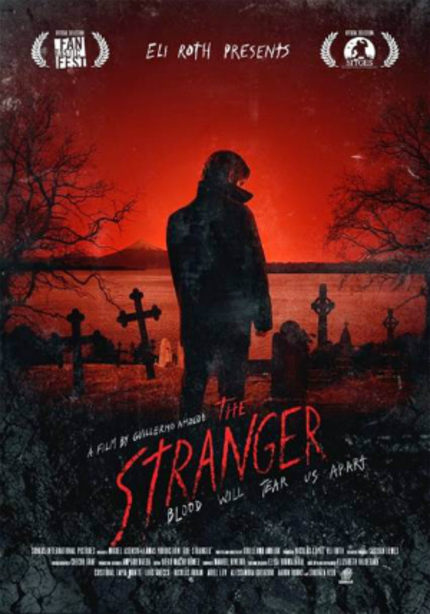 "A vampire film that doesn't scream that it's a vampire film," is how our own Michele "Izzy" Galgana began her review of The Stranger, which screened at Fantastic Fest in Austin, Texas, last fall.

Poised for release by IFC Midnight in select theaters and on demand in the U.S. on June 12, we've got a new trailer and poster to share. You can watch the former below -- featuring a quote from Izzy's review -- and feast your eyes on the latter alongside this text.

Written and directed by Guillermo Amoedo, the English-language film is presented by Eli Roth, who serves as executive producer along with Nicolas Lopez. The official synopsis lays things out nicely:

In this supernatural thriller, a mysterious man arrives in a small Canadian town seeking his wife, but his unwelcome presence and what he finds instead soon plunges the community into a bloodbath.

Amoedo has been working with Lopez for years, and the duo more recently began collaborating with Roth (Aftershock, The Green Inferno, Knock Knock). But The Stranger follows its own, distinctly different path than the films of Lopez or Roth, setting things up in a deliberate fashion and maintaining an air of mystery. It's well worth checking out.

Do you feel this content is inappropriate or infringes upon your rights? Click here to report it, or see our DMCA policy.
Aaron BurnsAriel LevyChileEli RothGuillermo AmoedoLorenza IzzoNicolas DuranThe Stranger