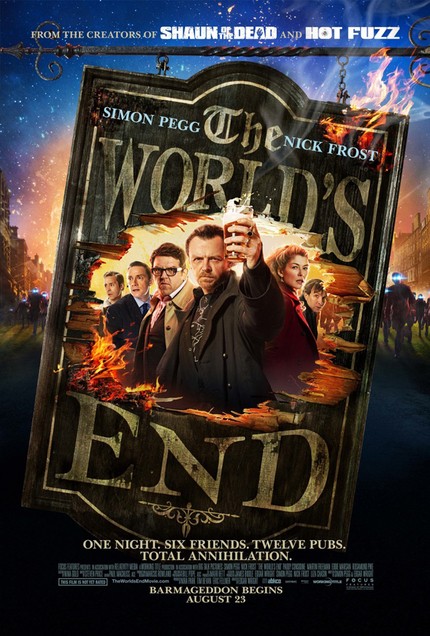 As we enter the Fall season there are a number of festivals that we like to keep an eye on. The Lund International Fantastic Film Festival out of Lund, Sweden, just happens to be one of them. LIFFF happens to be especially important to genre filmmakers in Europe because of its inclusion in the European Fantastic Film Festivals Federation. As a participating member of this federation the competition winner at this festival then goes into the Méliès d'Or competition for best European fantastic feature film and short film in Sitges this October. So, a win at Lund can lead to very good things.
Below is the announcement of the first wave of titles at this year's edition. There are a lot of familiar titles in the mix; a lot of titles we have appreciated throughout the year. You have your apocalyptic pub crawls. You can always count on Vampires. Do not turn your back on American cannibals. And top it off with hungry Japanese martial artists. So, if you happen to find yourself in Lund, Sweden at the end of September you will not be able to say there is nothing to do while you are there!
Our thanks to Christian Hallman, Program Co-Director and Member of the Board of LIFFF, for the heads up!

It's once again time for Scandinavia's leading film festival for films of the fantastique! A 10 day celebration with over 100 fantastic films. And now the time has come lift the lid of the treasure that is Lund International Fantastic Film Festival 2013. These are the first wave of titles that will be screened between September 26th and October 5th.
Edgar Wright puts the bookend on the Cornetto trilogy with The World's End where Simon Pegg, Nick Frost and their old friends decide to remake a legendary pub crawl. But it's not just them that's changed, there is something odd and weird with the locals. After getting their hands dirty with the zombie and buddy cop genres the dynamic trio now turn to Sci Fi for the final film in the trilogy.
Director of the highly acclaimed Waltz with Bashir, Ari Folman is back with The Congress. A colorful hallucinogenic trip into a surreal future where nothing is what it seems to be. Actress Robin Wright (played by Robin Wright) is starting to get old in the eyes of Hollywood and is offered one last contract. A studio wants to digitalize her by scanning her body as well as her soul and buy the right to use her in all kinds of films, forever. But what on earth does that really mean?
Almost two decades after Interview with the Vampire, Oscar winning filmmaker Neil Jordan (The Crying Game) once again opens the door to new bloodsuckers in Byzantium, a sensually beautiful tale that brings new blood to an ancient genre.
The legendary manga/anime Rurouni Kenshin more known in the west as Samurai X is brought to life in this live action version. And incredibly lively and entertaining swordplay movie with some of the best fight choreography in ages.
LIFF favorite Jim Mickle have previously shown us a Manhattan infested with ratzombies in Mulberry Street and brought us on a raw and mesmerizing vampire trip through Stake Land. Now, he invites us into a cultish American home where a secret family recipe is served in We Are What We Are.
Allowing Shakespeare to be interpreted by the man behind Buffy The Vampire Slayer and trade in The Globe Theatre for a luxury mansion in southern California might sound like a theatre critic's worst fever nightmare. But when Joss Whedon took a break from shooting The Avengers and invited his actor friends from Firefly and The Cabin in the Woods to "party and recite Shakespeare" he wasn't joking around, and the result is one of this year's most unexpected treats in his version of Much Ado About Nothing.
The Tower is a South Korean Die Hard Nodding version of The Towering Inferno which succeeds in both building characters to care for and demolishing an ill fated building in the most spectacular ways. Wonderfully brutal explosions and nervy drama will get all seats in the movie theater to quake with suspense, for sure.
If you've ever been curious about the effects of drinking and smoking during pregnancy, Hell Baby will shed some light on the subject. Hell Baby is this year's most playful goofball horror comedy, this hellishly entertaining hangover movie shows Scary Movie how it's done
Hell has no fury like a woman scorned. This is especially true in Sweet Vengeance a gorgeous western, where the beautiful, sandy landscape is so present that it almost deserves a mention in the credits. January Jones (Mad Men) is Sarah, a poor but happy woman living with her husband Miguel in the New Mexico Territory. They don't have much, but they get by. But one day, Miguel doesn't come home, and happiness is forever lost. Sarah goes to find out what happened to him, and to get her revenge. But Sarah is just one piece on the board in this extensive game of wills.
Delicious fights and exquisitely choreographed food in a profoundly original homage to its genre; awaits you in Bushido Man. Back from one year's pilgrimage throughout Japan, the time has come for Toramaru to show that he has honored his discipline during his adventures. He has faced seven different enemies, all martial experts with their own unique weapon skills, but not before eating his way through their favorite menus at local restaurants.
This is just a fraction of the delights we will be bringing you this year and we will of course have a host of exciting filmmakers present and our two Competition sections will be making their return.
Johan Barrander
Festival director
Fantastisk Filmfestival