Terror and Tragedy! Watch the Victims' Farewell Messages In THE TOWER 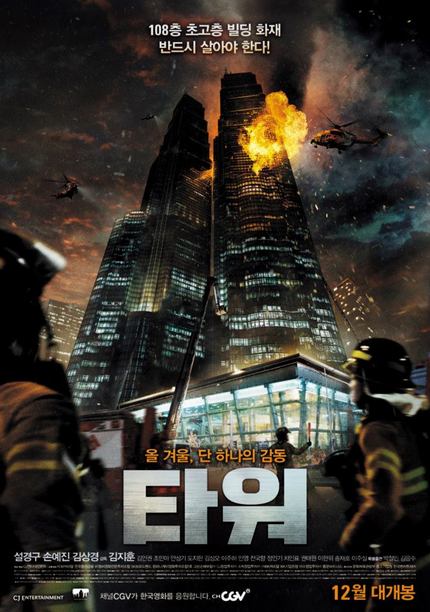 To attract attention for the Korean blockbuster disaster film The Tower, CJ Entertainment is playing up the sentimental card in full force with two special videos that have a heartfelt animated sequence and a tear-jerking "last message" from the victims trapped inside the burning building. It may damper the happy holiday mood, but it's no less an effective marketing strategy.

Mr. JO is making plans for a "White Christmas" party for tenants and VIPs at Tower Sky, the super-luxurious landmark building complex he owns in Seoul. Part of the event will involve helicopters circling above, sprinkling snow on everyone below. Dae-ho, the single father and manager of the building, is an earnest employee liked by his colleagues and loved by his only daughter Ha-na. He has a secret crush on Yoon-hee, a restaurant manager but hasn't got the guts to tell her. Dae-ho has promised his daughter they would spend Christmas day at an amusement park together but the unexpected party plans hold him back. On Christmas Day, the party is in full swing with two helicopters spraying snow above Tower Sky. When one of the helicopters crashes into the building, a fire breaks out and spreads rapidly. Dae-ho is on the move trying to rescue Ha-na, Yoon-hee and his colleagues. At the same time, legendary firefighter Young-kee makes his way to Tower Sky, throwing himself into the burning building and bringing the blaze under control, helping Dae-ho in the process. Together they fight to save the lives of everyone around them--despite a simmering feud between the two men. One will survive, and one will make the ultimate sacrifice.

Directed by Kim Ji-hoon (Sector 7), the cast includes Sul Kyung-gu, Son Ye-jin and Kim Sang-kyung. The action melodrama is set for release theatrically in Korea on December 25.  You'll find the two special videos and an English subtitled version of the trailer embedded below.
Tweet Post Submit

Do you feel this content is inappropriate or infringes upon your rights? Click here to report it, or see our DMCA policy.
DiasterKim Ji-hoonKim Sang-kyungSon Ye-jinSul Kyung-guThe Tower