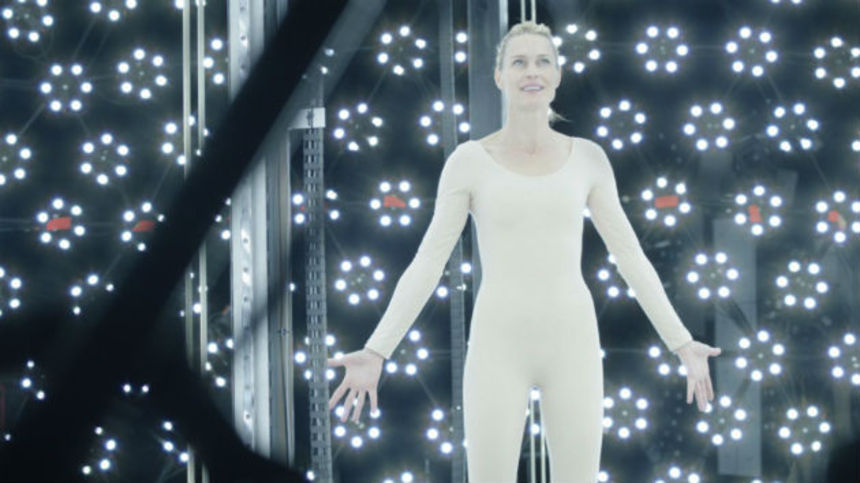 Loosely based on the sci-fi musings of Stanislav Lem, Ari Folman follows up his Oscar-nominated Waltz With Bashir with this ambitious and mostly successful exploration of celebrity, cinema and the subconscious.

One of the biggest criticisms of Cinema, and Hollywood in particular, is that there are no good roles for women after they reach a certain age. Once they hit their 30s, their 40s if they're very lucky, then most jobbing actresses either run out of work or find themselves stuck playing wives, mothers, matrons or grannies for the rest of their careers. It is with this sentiment in mind that Ari Folman opens The Congress, his loose yet ambitious adaptation of Solaris author Stanislav Lem's 1971 novel, The Futurological Congress.

Robin Wright plays a thinly veiled version of herself, a once-successful Hollywood actress now staring down the barrel of middle age. She is encouraged by her manager (Harvey Keitel) to entertain a unique business proposal from Danny Huston's pioneering studio head, who recognises the powerful draw actors have over audiences when in their prime, and how in the case of Ms. Wright, that appeal has waned with age.

The studio offers to create a digital version of Robin Wright who can continue to work in movies forever - looking young, fresh-faced and fabulous. Of course, this Dorian Gray-esque proposal comes at a price. Wright will be paid handsomely for her likeness - and with an ailing young son (Kodi Smit-McPhee) to care for this is of genuine appeal - but she must agree to disappear and never act or make a public appearance again. It's a deal that brilliantly shoots for the heart of the celebrity ego. To stay young and popular forever, but to relinquish all the adulation and praise that it creates. There is an amusing negotiation about what genres Wright is willing to see herself partake in ("no sci-fi, no porn"), but needless to say, she takes the offer.

Those familiar with Lem's source material may struggle to see how any of this relates to the novel, in which hero Ijon Tichy embarks on a psychotropic odyssey of satirical discovery in the sewers of Costa Rica, while attending the titular conference. However, once Wright literally sells her soul to the studio, and has her every body movement and facial expression scanned during one of the film's standout sequences, Folman's version of The Congress suddenly leaps forward 20 years, and Wright steps across the divide into an alternate, animated cinematic universe. 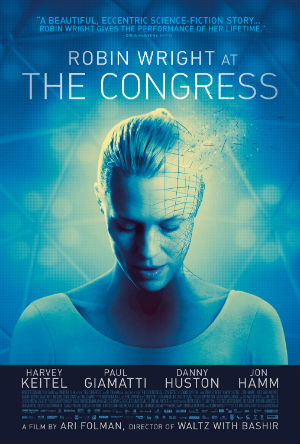 Back in 1971, Lem used water spiked with pacifying hallucinogens as his catalyst for looking at the world in new ways, Folman uses our obsession with Cinema and idolatry of celebrities. In his wild vision of the future, Robin Wright isn't just a gun-toting, ass-kicking star trekking action babe, you can actually pay to become that person and live your life "as" a celebrity. The world is a perpetual dreamscape where everyone resembles a familiar face, yet where everyone is playing a role, escaping their own identity, living the dream.

Folman's animation style here is part Rene Laloux's Fantastic Planet, part George Dunning's Yellow Submarine, with more than a dash of Alan Parker & Gerald Scarfe's The Wall, and the results are every bit as psychedelic as one might expect from that potent cocktail. Where his previous film, Waltz With Bashir, used animation in stark juxtaposition to the film's grave subject matter, here the tone jumps wildly from familial drama to social satire, to romance to nightmarish surrealism, and the result is a truly unique and thoroughly rewarding cinematic mind-bender.

Ironically Robin Wright is probably better here, even in animated form, than she has been in many years, and the aforementioned "scanning sequence" is a master class of reactions, while co-star Keitel's lengthy soliloquy proves another late-career high for an actor too-long absent from our screens. Kodi Smit-McPhee is also good value as Wright's adolescent son slowly losing grip on his senses, and there are also memorable turns from Danny Huston, Paul Giamatti and John Hamm.

The real star of The Congress, however, is its visual bravado. Folman works again with animation director Yoni Goodman, and together they have created a vibrant new incarnation of animated science-fiction that stimulates the senses and invigorates the mind. Folman may not have faithfully adapted Lem's original novel for the screen, but he has fully embraced the ideas at its core, resurrecting them in a new flesh for a generation saturated by media and technology to recognise, and recoil from in terrified self-realisation.

Review originally published during PiFan in July 2013. The Congress opens in select theaters in the U.S. via Drafthouse Films on Friday, August 29. Visit the official U.S. site for more information.

Do you feel this content is inappropriate or infringes upon your rights? Click here to report it, or see our DMCA policy.
animationAri FolmanDanny HustonHarvey KeitelRobin Wrightsci-fiStanislav Lem