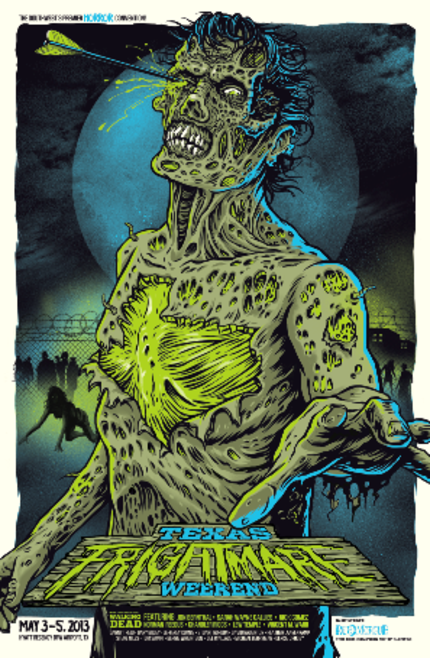 2013 marks the ninth anniversary of the southwest's biggest horror convention, Texas Frightmare Weekend, and while we at ScreenAnarchy don't typically do a lot of convention coverage apart from San Diego Comic Con, TFW rates as an exception due to the fact that they regularly present some of the most hyped horror films of the year at special screenings. This will mark our third year at TFW, and after seeing such gems as the southwest premiere of Lucky McKee's The Woman two years ago and Astron 6's Father's Day last year, the line-up for 2013 is even more stacked.

This year TFW has teamed up with IFC Midnight to bring a few Texas premieres to the convention with a kick-ass trio of films that I cannot wait to sink my greasy mitts into. First up is Ben Wheatley's Sightseers (not exactly a Texas premiere as it screened secretly at last year's Fantastic Fest), in which a pair of travelers cut a bloody swath across the English countryside. Next is Neil Jordan's (The Company of Wolves, Interview with a Vampire) return to horror cinema, Byzantium, a thinking man's vampiric romance tale starring Saoirse Ronan. Last in this group is Alexandre Aja's (Piranha 3D, High Tension) remake of Bill Lustig's grimy exploitation classic, Maniac, starring Elijah Wood in the role made disgustingly real by Joe Spinnell in the original.

In addition to those big ticket films, TFW has also lined up a few smaller titles for curious viewers that may also be of interest. First among those is Rodrigo Gudino's (publisher of Rue Morgue Magazine) debut feature, The Last Will & Testament of Rosalind Leigh. Other smaller titles include Axe Giant: The Wrath of Paul Bunyan, Scream Park, Jacob, Haunted Trailer, Enchiridion, Adjust Your Tracking: The Untold Story of the VHS Collector, and a special midnight show of The Rocky Horror Picture Show.

Anyone who regularly visits horror conventions knows that a lot of the appeal is the guest list, and TFW never disappoints in that regard. Here's an abbreviated list of some of the talent scheduled to appear:
The Walking Dead -

Then there are the panels, always a joy, and far too many to list here. Even if you're not a fan of the films, the panels are always entertaining and worth checking. However, my favorite part is the vendor selection. Thousands of square feet are dedicated to vendors at TFW, so sell your children and prepare to bring home some great stuff!

Texas Frightmare Weekend opens on Friday May 3 and runs through May 5, with the vast bulk of the film/panel action taking place on Saturday the 4th. Get your passes soon, it's definitely going to be a packed house! Check the "More from around the web" link below for more info and a detailed schedule.