Review: Tears and Flames - Christmas Mayhem in THE TOWER 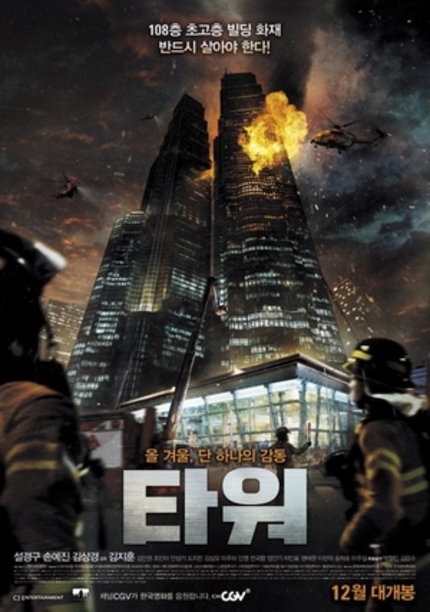 Following the biggest ever year for Korean cinema, it is perhaps fitting that the very last work to be released in 2012 was a spectacle-driven disaster film highlighting the industry's technical proficiency. Likened to previous blockbuster failures such as Sector 7 (2011), My Way (2011) and this year's R2B: Return to Base, there was a danger that The Tower could have made for a sour note to conclude Korean cinema's fortuitous year. Any such qualms were quickly dispelled however as the film registered the industry's all time second-biggest opening day and is well on its way to an enormous finish.

It's Christmas Eve and the brand new Tower Sky complex, a brilliant pair of skyscrapers soaring over Seoul's skyline, is busily preparing for its glitzy holiday party. During the festivities, a helicopter dropping artificial snow crashes into the building and ignites a fierce blaze, threatening the lives of hundreds. Now, a building technician, his daughter, a restaurant manager and a legendary firefighter must brave the flames.

The blueprint for The Tower is Haeundae (2009), another highly successful disaster film which also starred Sol Kyung-gu. In that film, a series of loosely-related characters were introduced in the beachside Haeundae community in southern Korea before fighting for their lives as a tsunami bore down on them. Both are highly calculated productions that incorporate large doses of melodrama into tightly structured formats. However, whereas the former film took a full hour before bringing on the carnage, this new offering dives into the spectacle in less than half that time. This quicker set-up is both a strength and a hindrance. Haeundae took too long to get to its action points but it did allow for us to become invested in its characters. Meanwhile, The Tower gets down to business quickly but the plight of the lead protagonists draws less of our sympathy. A catch-22 that is hard to avoid in this genre.

Without a doubt, the film's greatest strengths are its impressive effects. The combination of convincing CGI, elaborate sets and the use of real fire packs quite a punch and the snappy editing makes it all the more effective. As the helicopter's snow machine scrapes the side of the building, all hell starts to break loose within the building's upper flours. The mayhem is dizzying as shattered glass bursts from all sides and rivers of flames lap through the corridors, no one is safe from the devastation and the body count quickly rises during this initial volley of pandemonium.

The film's technical ability is top notch and this is Korean cinema at its most proficient but also its most commercial. One thing that didn't sit well with me was the paradoxical nature of the film's narrative. Aside from the fire, the script attempts to paint a few minor characters, representing the rich elite, as antagonists. It's a clever move as the tower's magnificent height is a strong visual metaphor for social class. However, while a lot of time is dedicated to the unfairness in the system it rings a little hollow in a film that demonstrates the industry at its most calculated.

Casting is hardly the most important thing for a disaster film and in keeping with that, The Tower, despite a lot of familiar faces, mostly relies on stock caricatures. As far as the main players are concerned, veteran Sol Kyung-gu is persuasive as the ace firefighter while his co-stars Son Ye-jin and Kim Sang-gyung, as potential love birds, seem a little listless and lost in the breathless pace of the feature. In smaller roles, Ahn Sung-kee is a welcome presence during the obligatory exposition scenes at the operations base down below while Kim In-gwon serves up a few good laughs in his comic relief role.

Director Kim Jee-hoon previously helmed the woeful Sector 7 but, despite his new film's reliance on saccharine melodrama, contrived plotting and wafer-thin characters, there's no doubt that it achieves what it sets out to do. One thing that struck me (slight spoiler ahead) was that following the ego-driven and all-too swift construction of Tower Sky, the very last thing to happen in a Korean film in 2012 was its demolition. I couldn't help but wonder if this was an omen, an unintentional metaphor of sorts for the future of the Korean film industry as it scaled breathtaking heights last year with a scarcely matched celerity. I hardly imagine such a cataclysmic fall from grace but it is food for thought. In the meantime, if you're in the mood for a maelstrom of steel, fire and emotions, you can do a lot worse than The Tower. 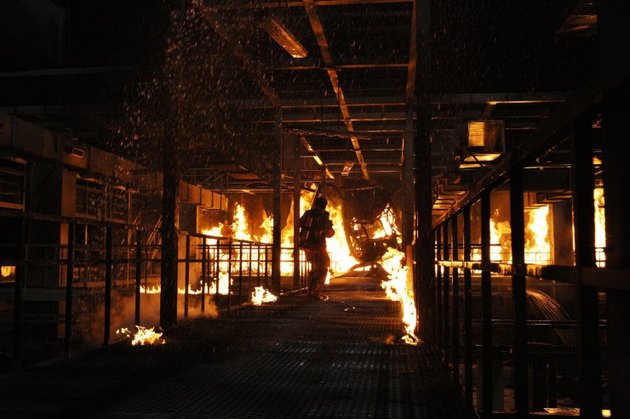 Do you feel this content is inappropriate or infringes upon your rights? Click here to report it, or see our DMCA policy.
2012disaster filmkoreakorean cinemareviewthe tower