Fantasia 2013 Review: BUSHIDO MAN Will Make You Hungry For More 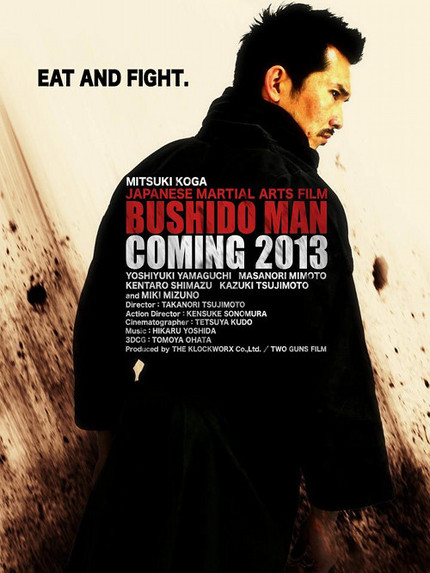 Toramaru has spent the last year on a pilgrimage to obtain seven scrolls from seven masters of different martial art disciplines. Toramaru will fight masters of kung-fu, stick fighting, sword fighting, nunchaku, dagger, pistols and a very special weapon at the end.
His master, Gensai, has taught him that he will know his enemy by what he eats. So before fists fly and blades clash, Toramaru sits down at local eateries and takes in a series of delicious meals. Toramaru tells the tales of each battle and believes his pilgrimage to be over and completed. But Gensai has one final lesson for his prized pupil.
If any other movie during Fantasia had 'genuine crowd pleaser' written all over it, then Bushido Man just waltzed over, ripped it off like a swathe of duct tape, slapped it on its own bare chest, and dared anyone else to come over and try to take it off!
First and foremost. How is the action? Koga Mitsuki and action choreographer Sonomura Kensuke know each other from Tsujimoto Takanori's Hard Revenge Milly films, so they were already familiar with each other's skill levels. Thus, Sonomura knew how far he could elevate the action, which is pretty freaking far! Man, are some of these sequences intense. There is an intimacy and ferocity to them that few films before Bushido Man have been able to achieve.
By that, I mean Sonomura is taking weapons meant to keep your opponent at a distance like the Katana and Bo Staff and bringing them closer than I have ever seen before. Because the reality of combat is, at some point, your opponent can be right up in your face regardless of what kind of weapon you have in your hand. So you have a Katana fight with a blind swordsman (a nod to Zatoichi) that is at times fought within inches of each other. Same goes for the Bo Staff. Apart from that, the rest of the action scenes are top tier stuff. The action is amazing.
As far as the script is concerned, the story is pretty straightforward. Eat, then fight. Recover and repeat. What I was not expecting was the level of humor Tsujimoto wrote into his script. One time Miike Takashi regular Yamaguchi Yoshiyuki plays Master Gensai, and he gets lots of terrific material in those interludes between the seven tales. All I will say about the climactic fight scene is, do not get up to leave.
And Tsujimoto's direction is great, too. With such a level of intense and intricate fight choreography, Tsujimoto worked closely with Sonomura to ensure that all of that action was framed well and none of it got lost in the motion. When they get in close, they do not miss a beat, which is what happens a lot of the time when other directors have tried to pull their audience into the fight. I know that repeat viewings will unveil moves that I missed in the flurry of action, but I was tremendously impressed by how well Tsujimoto and his camera operator framed and captured the action.
If I were to make any comparison to a previous film so that you may have a frame of reference, then I would say that Bushido Man has that same raw energy and feel as Kitamura's Versus did. Bushido Man is a little to no budget fighting film shot in the woods, a beach and a warehouse with the director, his cast, and skeletal crew. The first fight with the Kung-fu master was just Tsujimoto, Koga, Sonomura as the Kung-fu master, and the camera operator.
If you feel that fighting action films have lost their luster in recent years, then please seek out Bushido Man as it continues its festival run. It will restore your faith in action cinema. At the same time, watching Koga eat a lot during the movie will likely result in a mad dash to a local eatery after the screening. Drool.
Sign-In to Vote
Tweet 0 Submit

Yes. Low budget indeed. Tsujimoto would go as far as saying no-budget but the results are nonetheless impressive. Give it a go!

This looks great! I love how close the camera is getting in one those weapon fights as mentioned in the review above. I hope it holds up as a movie because that was a great trailer.

Agreed. The camera is close enough to feel the ferocity of the fights and (I wish more fight scenes took this more into account) see the emotion of the opponents, yet it's still clear to see the fight choreography.