BYZANTIUM Trailer Beautifully Depicts the Flow of Blood and Time 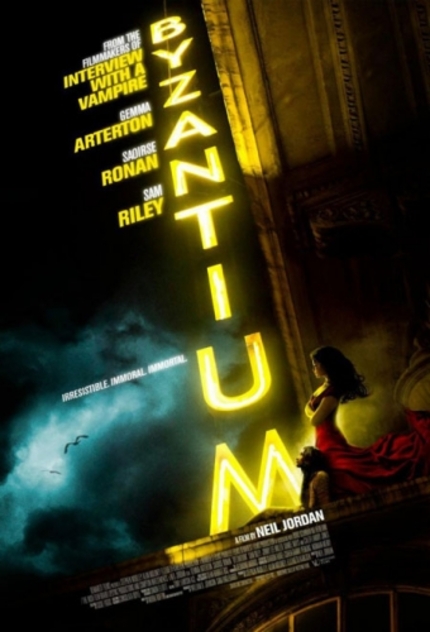 In a post-Twilight movie landscape, where zombies seem to own the pop cultural zeitgeist for the moment, Neil Jordan's Byzantium is a bit of a curious creature out of time. The film, which played to a muted, somewhat baffled, response on last year's festival circuit unveils itself in a handsomely cut trailer that shows off the luxurious beauty of the cinematography and several signature images: a tiered waterfall of blood, elongated fingernails used instead of fangs, and the ample bosom of Gemma Arterton. If you want to do a more stately and classical take on the modern vampire (read: no sparkling emo treacle) with just a hint of that lurid True Blood pulp, it would appear that Neil Jordan is indeed the correct man for the job.

Arterton is joined by Saorise Ronan who plays a more introspective bloodsucker, a girl frozen in time due to early conversion to the undead lifestyle (echoes of Kirsten Dunst in Jordan's previous foray into the genre with Interview With A Vampire.) Jumping between a period-piece origin story told in flashback and a the contemporary story, set in a large hotel reminiscent of the Bradbury Building, with cops (Sam Riley) and lovers (Antiviral's Caleb Landry Jones) it straddles the middle ground between Anne Rice's gothic romance and Russell Mulcahy's Highlander.

Check out the trailer for yourself, below.