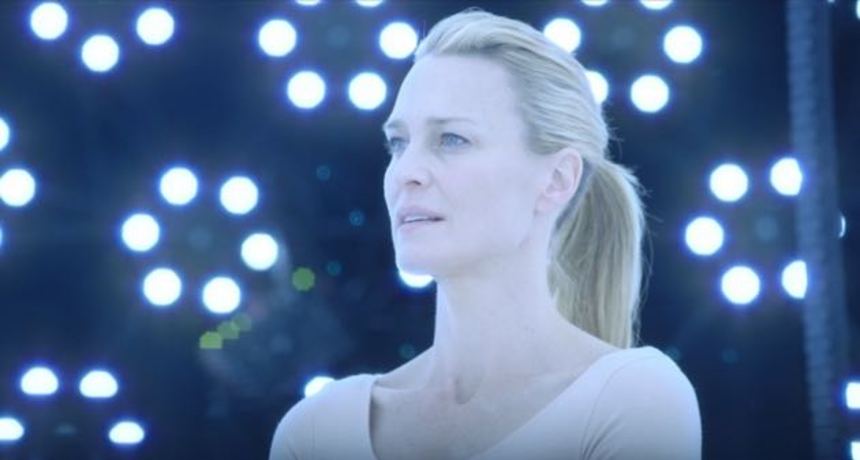 Drafthouse Films' Obscure Objects of Desire (or Drafthouse FOOD if you must) is a new regular column assessing the home cinema releases from the Austin-based distributor.
Ari Folman's follow-up to his animated Oscar-nominated documentary, Waltz With Bashir, is a loose adaptation of Polish author Stanislav Lem's mind-bending novel The Futurological Congress, transplanting the action from a futuristic Costa Rica to an all-too believable modern-day Hollywood.
Arriving on Blu-ray in the US courtesy of Drafthouse Films, The Congress stars Robin Wright as a thinly fictionalised version of herself, who has struggled to move past early successes in films like The Princess Bride and Forrest Gump as she enters middle-age. Realising her career is coming to an end, Wright reluctantly accepts an offer from Danny Huston's studio head to submit to a full body scan, after which they will own her likeness to do with as they please. She will be paid handsomely and the on-screen Robin Wright will secure all the best roles and remain forever young, but she must retire completely from public life for the next 20 years. With an ailing son to care for, it is a tempting proposition.
In my original review of The Congress, from the film's Asian premiere at PiFan in 2013, I wrote:

It's a deal that brilliantly shoots for the heart of the celebrity ego. To stay young and popular forever, but to relinquish all the adulation and praise that it creates. There is an amusing negotiation about what genres Wright is willing to see herself partake in ("no sci-fi, no porn"), but needless to say, she takes the offer.
Those familiar with Lem's source material may struggle to see how any of this relates to the novel, in which hero Ijon Tichy embarks on a psychotropic odyssey of satirical discovery in the sewers of Costa Rica, while attending the titular conference. However, once Wright literally sells her soul to the studio, and has her every body movement and facial expression scanned during one of the film's standout sequences, Folman's version of The Congress suddenly leaps forward 20 years, and Wright steps across the divide into an alternate, animated cinematic universe.
Back in 1971, Lem used water spiked with pacifying hallucinogens as his catalyst for looking at the world in new ways, Folman uses our obsession with Cinema and idolatry of celebrities. In his wild vision of the future, Robin Wright isn't just a gun-toting, ass-kicking star trekking action babe, you can actually pay to become that person and live your life "as" a celebrity. The world is a perpetual dreamscape where everyone resembles a familiar face, yet where everyone is playing a role, escaping their own identity, living the dream.

On the small screen, Folman's incredible vision loses none of its potency. The strength of Wright's performance, and the emotional turmoil inherent in her narcissistic decision, prove just as powerful. Likewise, the transition from live action to animation looks gorgeous in high definition, where the skills of Folman's animation director Yoni Goodman are given the best possible treatment. Drawing from various influences, from Fletcher Studios' classic cartoons of the 1920s to Rene Laloux and even Miyazaki Hayao, the dream world of Abrahama proves both intoxicating and terrifying.
When Drafthouse Films premiered The Congress at Fantastic Fest in 2013, Wright rightly won the Best Actress award for her efforts, while the film won Best Screenplay and was named Best Film. It was also rewarded at Sitges, Tokyo and the European Film Awards. A year later and the film is now available to own, and in addition to a beautiful transfer of the film, Drafthouse's Blu-ray release includes some notable supplements to enhance your viewing experience. 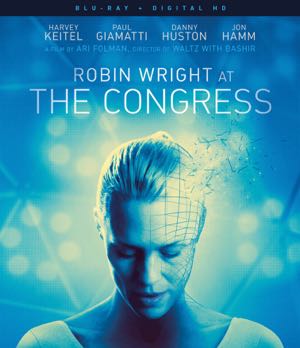 Chief among these is an audio commentary from writer-director Ari Folman, in which he speaks candidly about his relationships with his actors and their various methods and techniques on set. Forman worked closely with Wright once she agreed to take on the part, pushing for her onscreen doppelgänger to be as close to our public perception of the actress as the real Robin Wright would feel comfortable. Surprisingly, Folman recounts, Wright didn't object to any of the scripts sensitive jibes at her expense and even helped him get closer to the truth.
Forman also speaks highly of Kodi Smit-McPhee, who portrays Wright's son Aaron, who worked with the sound recordist without Folman's knowledge to great certain audio disturbances that would affect Smit-McPhee's performance the way he wanted to take it. Paul Giamatti also receives high praise as a talented performer and consummate professional, as does Huston, but Folman's best anecdotes are reserved for Harvey Keitel. The actor puts in one of his best performances in many years as Wright's persuasive manager Al, but was apparently rather more stubborn and forceful during shooting than Folman would have liked.
As the film transitions into animation, Folman is joined on the commentary by Goodman and production designer David Polonsky, after which the tone lightens considerably. Clearly firm friends, the trio joke around, pointing out the film's numerous references to Nazis and the Holocaust (apparently something that's illegal in their native Israel), while also discussing their process and spinning a number of interesting anecdotes along the way (Keanu Reeves was originally lined up to play Jon Hamm's role). Perhaps most interesting of all is that, while not rotoscoped or mo-capped, all the actors performed all of their animated scenes for camera, with no separately recorded voice work.
In addition to the commentary, Drafthouse's release also includes a concise yet candid interview with star Robin Wright, in which she speaks with obvious passion about the film, her process and what it meant to expose herself so openly on screen. The disc also includes the original theatrical trailer for the film, as well as trailers for a number of other Drafthouse releases. Overflowing with artistry and invention, The Congress is one of the most ambitious, profound and absorbing science-fiction films in recent memory, and has been given a suitably pristine and attentive release here.
The Congress is available on Blu-ray, DVD and digital download in the US from Drafthouse Films now.
Sign-In to Vote
Tweet 0 Submit

..saw this film for the first time yesterday.

Its Magnificent, its Brilliant, its Confusing as heck - with seeming "dead-ends" EVERYwhere, its touching, its Bold, its Audacious, its Amazing, its Genius, its Intelligent,. ... .....et al.

Personally, the only other performance of Ms. Wright that comes CLOSE to this is Adore.. *Another DANDY of a film - but i digress........

This is EASILY on par with the likes and the company of Mr. Nobody, Trance, Cloud Atlas, Enemy, Womb, Ex Machina, Automata, Predestination, and Snowpiercer.

~ BRILLIANT performances by EVERYone in a Stunningly S.TELL.AR cinematic experience.