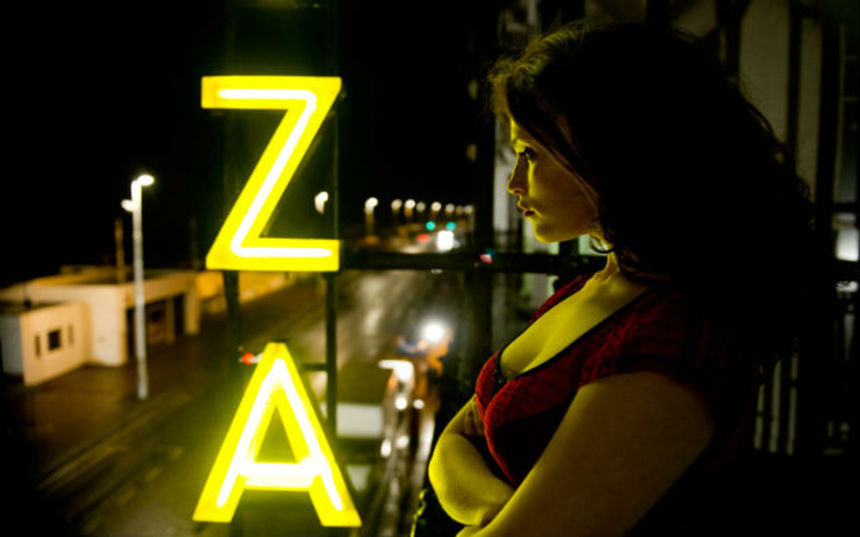 Two sisters try to lay low in Dublin while being pursued by long-coated inspectors. Having committed a rather kinetic and conspicuous murder in the opening sequence of the film, the Webb sisters are actually a pair of highland blood suckers, a 200-year-old mother and daughter pair of vampires.

Possibly the last of their kind, moving from town to town and still working out some serious parent-child issues (not the least of which is their approach to handling their prey), Gemma Arterton literally vamps it up, putting on a prostitute pose to seduce low-lifes and cops, while her daughter plays more school girl, a more subtle and melancholic performance by Saoirse Ronan. The opposing disposition of these ladies -- and the secrets they keep -- are the engine for a plot that takes its sweet time to get going, but eventually, perhaps too late, pulls the narrative strings together.

Neil Jordan is no stranger to either fairy tales or gothic drama, having started his career with Red Riding Hood horror picture In The Company of Wolves, peaked commercially with the romantic vampire studio picture, Interview With The Vampire, and recently brushed up with Irish folklore in Ondine. Even the director's indie dramas, The Crying Game and The Butcher Boy, flirt with gothic and melodramatic stylings.

If you want to do a more stately and classical take on the modern vampire (read: no sparkling emo treacle) it would appear that Jordan is your man. Which makes it a bit baffling that Byzantium never really soars, even as it pulls all of its narrative strings together in a somewhat satisfying conclusion. The film tries to establish the contrast between its bodice-ripper (Gemma Arterton's cleavage upstages her somewhat histrionic performance) segments and stylized urban melancholy. Neither Anne Rice nor Mike Leigh, the film offers some compelling images in an attempt to marry the two, but it is an uncomfortable union.

My, what pretty images get put on screen, though! A pyramid-shaped waterfall that has its waters run red with blood. A grand old hotel that is reminiscent of the Bradbury Building and has the most wonderful neon signage. Ronan and Caleb Landry-Jones in their budding relationship having a contest on whom can out-freckle the other.

They make quite a visually interesting pair on screen, and I might have preferred a more Let The Right One In approach to the film over the century-spanning side-plots involving Johnny-Lee Miller, Tom Hollander and Sam Riley. Just watching Ronan play the piano like a prodigy, albeit one with more than 100 years of practice, or Jones struggle with a budding extroverted empowerment after falling in love makes the film feel more alive than the over-arching story of culty vampire Illuminati.

The film flirts with Poe and Shelley, emotional fall-out of the act's creation and destruction; it even flirts with bringing women to the forefront of driving a vampire tale, but ultimately, still feels like it misses the mark. Would that there was more depth to how Ronan's younger Webb establishes relationships with her marks, to the point that she gets a tacit approval for a re-visit many years later.

There is a more interesting story there, and for a film that postures itself about the power of storytelling, I'm hoping for a sequel that pursues that.

Review originally published in slightly different form during the Toronto International Film Festival in September 2012. Byzantium opens in limited theatrical release in the U.S. on Friday, June 28, and will be available via various Video On Demand platforms on Monday, July 1. Visit the official IFC Films website for more information.