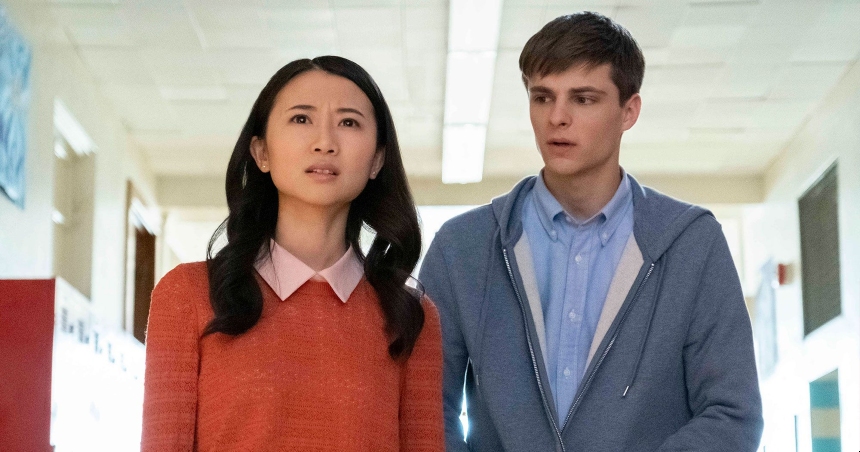 Icons of the 1980s clash in the latest Into the Dark horror-movie entry.

What I've enjoyed about Blumhouse Television's anthology series Into the Dark is the variety of approaches taken by the filmmakers. Last month's Culture Shock set a new high for the series. As it happens, Midsommar also opened in theaters that weekend.

Both films preyed upon my subconscious as I watched School Spirit, raising my expectations. Directed by Mike Gan from a teleplay credited to Gan, Patrick Casey and Josh Miller, based on Casey and Miller's story, School Spirit begins as a modern take on The Breakfast Club (1985), following stereotypical high-school students as they arrive one Saturday morning to serve detention for their recent misdeeds.

Erica (Annie Q.) is the standout academic, hoping to go to Harvard. Brett (Corey Fogelmanis) is the geeky good boy. Lizzy (Jessi Case) is the bad-ass bad girl. Vic (Julian Works) is a bad-ass bad boy. Russ (Philip Labes) is the goof-off. Jason (Jordan Austin Smith) is the athlete, hoping to get back with Erica, his ex.

Their school-teacher overseer is the loutish Mr. Armstrong (Hugo Armstrong), who endeavors to exert a bullying command over the miscreants that is not truly in his wheelhouse. He soon retreats to his office, leaving the youngsters to talk, banter, bicker, discover their similarities, and venture out into the hallways, where they soon must face the legendary and murderous ... School Spirit! (In a pirate outfit, no less.)

By the time The Breakfast Club hit theaters in 1985, the slasher trend in horror movies was already diminishing in creative energy, though it sputtered along for another two years in fairly full force. For my money, then, the idea of marrying it to a horror treatment holds a lot of promise. But how to make a daytime teen drama scary?

Daytime horror is a challenge that Ari Aster's Midsommar accepted fully, to somewhat mixed results. School Spirit begins in the school library, and then contrasts that with adjacent hallways and classrooms that are darkened. To further the 1980s' callbacks, the students have all surrendered their mobile devices to Mr. Armstrong, who places the premises on lockdown when the students start acting up.

I really like the premise. Also, I appreciate the filmmakers' strategy for removing technological aids, which is an inevitable challenge for all horror films set in the modern day. Yet the characters are confined within their tight stereotypical boundaries, and it's difficult for the filmmakers to generate sustained suspense from their surroundings, leading to a denouement that is entirely expected by anyone who has seen a slasher film.

Do you feel this content is inappropriate or infringes upon your rights? Click here to report it, or see our DMCA policy.
Annie QBlumhouse TelevisionCorey FogelmanisHuluJessi CaseMike Gan