Now Streaming: BETTER THAN US, In Russia, the Future Does Not Look Bright 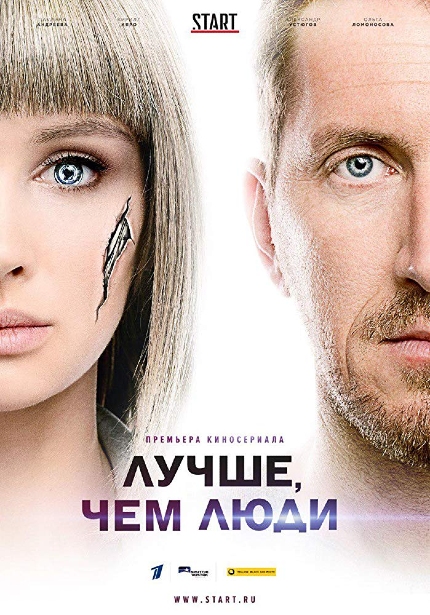 The first Russian live-action series for Netflix is a downer.

Better Than Us
Now streaming on Netflix.

"I'm an engineer, not a magician!"

Things must be tough in Russia, because even in the future, everyone is glum. All kinds of futuristic technologies have become part of the landscape, including smartphones implanted into wrists, wireless devices powered by voice-commands galore, and robots aplenty.

All the high-tech gear, though, doesn't make a whit of difference to pathologist Georgy Safronov (Kirill Käro) and his family. Georgy has visitation rights for his children, surly 16-year-old Egor and cheery 6-year old Sonya (Vitaliya Kornienko), with his bitter ex-wife Alla (Olga Lomonosova), who wants to sneak the children to Australia with her new husband and start over again. George will have none of that, however, even though he doesn't appear to be much of a father, at least since the divorce a few years before.

The slowly labored machinations of the unhappy family are very familiar to Western viewers, but this science-fiction series has been described as the first true Netflix original dramatic show from Russia. So what wonders has Russia produced for the world?

As far as the robots are concerned, the show is primarily concerned with Cronos, a large company that produces sex dolls for men, including Arisa (Paulina Andreeva), a new, experimental model who promptly escapes and finds refuge with Georgy's family, thanks to young Sonya. Mmmm. In general, human women are shown to be shrewish and complaining and bothersome to men, who are commanding and demanding. Truly, the unlikable characters become a glaring default, especially since the rest of the show's appeal lies only on its surfaces.

Through the four episodes that I've watched so far, in fact, the narrative has moved at a snail's pace. Certainly the surroundings look highly polished and the moody photography is beautifully captured, yet only two brief sequences stood out for their dramatic visual elements.

Things happen, yet the characters remain uniformly unhappy and unchanging. It's been so slow to develop that my initial guarded enthusiasm for the novelty of the show and the sheen of the production design has been gradually snuffed out.

To be frank, the show's overwhelming patriarchy is also dampening my interest. Admittedly, I am completely uninformed about current Russian society and how this somewhat-futuristic society reflects that. It may be that the creators are doing the best they can to express their outrage. Maybe I'm misreading their intentions entirely?

Whatever the case, the show, which runs for 16 episodes in total, has already become mighty wearisome. The eternal optimist in me can only hope that the pace quickens and the intrigue grows stronger, for those who wish to endure. I'm checking out.