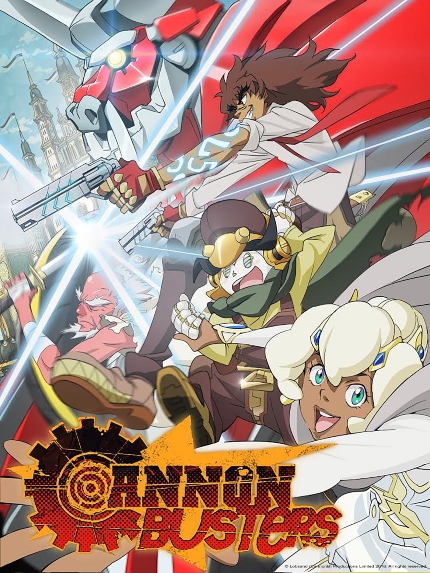 Two robots walk into a wasteland and emerge as friends with an immortal scoundrel.

Adapted by LeSean Thomas from his own two-issue comic book series, first published in 2005, Cannon Blasters is a wildly riffing adventure that quickly introduces Philly the Kid. He's an unruly bounty hunter who keeps getting killed, so it's a good thing he's an immortal. Philly drives a huge honking modified Cadillac and is known to be quite smelly.

In contrast, S.A.M. (aka Sam) and Casey Turnbuckle are mismatched robots who teamed up in search of Philly. Formerly a companion to a young royal, Prince Kelby, the taller Sam is programmed to be extremely friendly and is constantly, sometimes obliviously, trying to make friends with everyone. The shorter Casey is also very friendly and always positive; she's a mechanic who can fix anything.

Naturally, they drive Philly mad, which makes them the perfect companions for him. Philly is constantly annoyed and impatient with his new assistants, especially since they constantly foil his plans. Meanwhile, secondary story threads are developed, as Prince Kelby must go on the run with his bodyguard when an incredibly powerful enemy suddenly appears.

Filled with humor that occasionally made me laugh out loud, as well as a few timely moments of poignance, Cannon Blasters is breezy and consistently amusing. It's aimed at adults, as the abundant violent action and smutty jokes make clear, but overall it feels quite cheerful, which makes it very easy and enjoyable to binge-watch all 12 episodes, which I did during a few viewing sessions over the long weekend.

What also makes the series a breath of fresh air is the predominant presence of people of color in the cast of characters. I realize, of course, that it's all animated and that the original language is Japanese, but, as a newbie, it's a rarity among the two dozen or so original anime series that I've watched this summer to see anyone of a different color on screen, so bravo for that.

Summing up: Easy, enjoyable and rewarding to watch. Mostly I watched the episodes in Japanese with English subtitles, but I also sampled episodes in English, Spanish, German and French; I preferred the Japanese-language audio version.