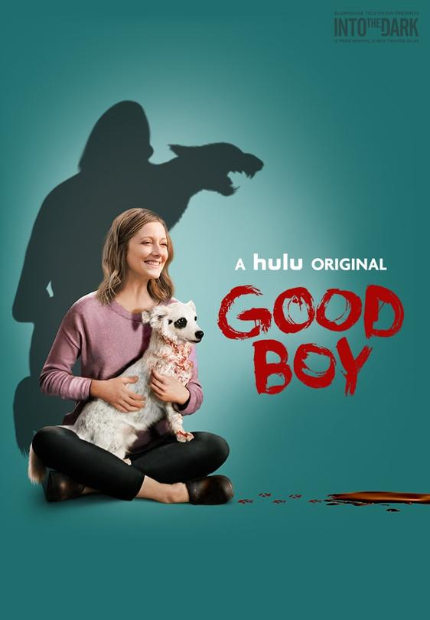 Presented monthly, the feature-length, holiday-themed Into the Dark series from Blumhouse Television has consistently enlivened the Hulu streaming service for horror fans.

The individual episodes vary in quality, yet the quantity of explicit blood and guts are seemingly designed to satisfy viewers who are convinced that anything labeled as "horror" must contain as much viscera as possible. My tastes do not run in that direction anymore, and so I tend to check out when the blood begins to flow freely, internal organs get ripped out, and so forth.

With that in mind, the latest installment in the series, Good Boy, is elevated almost entirely by Judy Greer, who portrays Maggie, a journalist who gets laid off from her staff position at a local newspaper in suburban Los Angeles, California. (Reseda, to be specific, in the San Fernando Valley.) She is offered freelance work, without benefits, which puts increasing pressure upon her to meet her monthly financial obligations, and prompts her to get a job at a coffee shop.

Stressed out entirely, Maggie accepts advice to get an emotional-support animal from a local shelter. Initially, this appears to be ideal, as the cute little dog helps her deal with her stress, which the dog seems to sense, and react to, in a pleasantly empathetic manner. As Maggie's anxieties rebuild, however, due to circumstances beyond her control, the dog begins to take more decisive action to defend Maggie from the sources of her stress.

Directed by Tyler MacIntyre (Tragedy Girls) from an original script by Aaron Eisenberg and Will Eisenberg, Good Boy plays out initially in expected fashion, before stamping its own impression on the formula. Maggie wants a child, but has not found a suitable partner yet and, now that she is approaching 40, realizes that she may need to consider other methods, which have their own, rapidly approaching deadlines. Combined with her bleak employment prospects, which add to her increased financial insecurities, it's no wonder that she is seeking comfort by whatever means are available to her.

Judy Greer brings depth to her role as Maggie, a woman at a major turning point in her life. She gives a wonderful, nuanced performance that makes it dangerously easy to empathize with her character when she starts down a dangerous path. Steve Guttenberg is nicely slippery in his ethics as her newspaper boss, while McKinley Freeman is an able, very competent police detective who takes a personal interest in Maggie. Ellen Wong contributes a convincing turn as a friend who inspires more, unintended anxiety.

But Good Boy belongs to Judy Greer, a national treasure whose deft ability to deliver a comic line with relish and talent for inspiring fear, trembling, and great compassion makes the latest installment of Into the Dark so biting.

Do you feel this content is inappropriate or infringes upon your rights? Click here to report it, or see our DMCA policy.
Blumhouse TelevisionHuluInto the DarkJudy GreerSteve GuttenbergTyler MacIntyre