Britt Baron, Anna Lore, Benedict Samuel and Anna Akana star, as writer-director Maggie Levin gets to the heart of an abusive relationship in the latest entry of Blumhouse Television's Into the Dark series on Hulu. 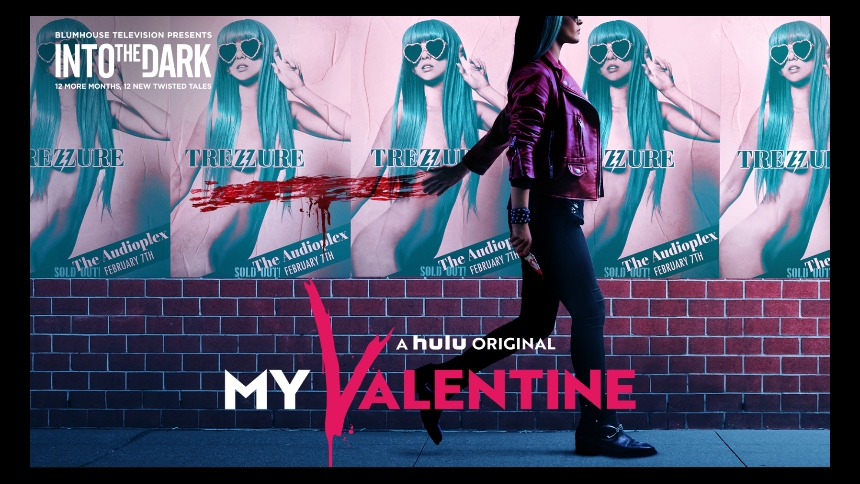 Whose valentine is it, anyway?

My Valentine
Now streaming on Hulu.

Admittedly, the current pop-music scene is most definitely not my scene. Like all good horror movies, though, writer-director Maggie Levin's My Valentine is more about the people who are experiencing horror than it is about the atmosphere in which it takes place.

Once seemingly destined for musical stardom, Valentine (Britt Baron) is on the comeback trail. Accompanied and supported by her best friend Julie (Anna Akana), Valentine is getting back on her feet from the wreckage of an abusive relationship with her ex-boyfriend and manager Royal (Benedict Samuel).

As she concludes a show, though, her past comes roaring back into her present when Royal appears at the club. Now managing breakout artist Trezzure (Anna Lore), who is younger yet looks like Valentine's fraternal twin sister, Royal makes a proposition that threatens to change Valentine's life forever. When things don't go his way, Royal begins to outwardly manifest the murderous menace that has always been an essential element of his personality and success.

Written and directed by Maggie Levin in her feature-length debut, My Valentine splatters a wild collection of media influences onto the screen, which soon come into focus through an emphasis on the characters and the story that is unfolding. Valentine and Trezzure are stereotyped as rivals, but the truth hits much closer to home for anyone who has endured and/or survived an abusive relationship.

Likewise, Royal is the kind of man that makes me ashamed of being a man, but it would be wishful thinking to pretend that his monstrous thoughts, words and actions stretch the bounds of reality. Britt Baron, Anna Lore, Benedict Samuel and Anna Akana all give spot-on performances that never call attention to themselves, instead illuminating the characters they are portraying.

My Valentine is, most definitely, a horror film, with a surfeit of profanity and violence. While it adheres to certain genre tropes, it also blatantly rejects other expectations, displaying multiple tonal variations as it throws occasional dark comic vibes on top of scenes that otherwise play as deadly serious.

In other words, My Valentine rocks, even though the soundtrack is filled with pop music that I generally abhor.

Do you feel this content is inappropriate or infringes upon your rights? Click here to report it, or see our DMCA policy.
Anna AkanaAnna LoreBenedict SamuelBlumhouseBritt BaronHuluMaggie Levin