Los Cabos 2014 To Screen BOYHOOD, LIFE ITSELF, WHAT WE DO IN THE SHADOWS, And More 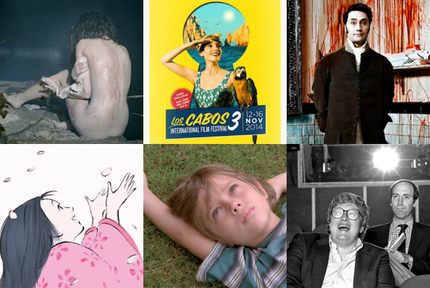 During five days (November 12-16), the festival will be premiering in Mexico Richard Linklater's 12-years-in-the-making-epic, the acclaimed documentary on the late film critic Roger Ebert, the latest film by Japanese animation master Takahata Isao, and even some Miike Takashi. That's right, Los Cabos is hosting the Mexican premiere of Boyhood, Life Itself, The Tale of the Princess Kaguya, and Miike's Over Your Dead Body.

Boyhood is the selection for the closing night gala, on November 15, and both Ellar Coltrane and Lorelei Linklater are attending the festival. Steve James' doc Life Itself is screening as part of the festival's posthumous homage to Ebert, with the critic's widow Chaz Ebert in person. Other special guests are Rosario Dawson (presenting The Captive) and Reese Witherspoon, who will be in Los Cabos for the Latin American premiere of Jean-Marc Vallée's Wild. This adds to the previously confirmed visit of Xavier Dolan, Atom Egoyan, and Denys Arcand.

On the other hand, the mentioned Japanese films are part of four sections that Los Cabos just announced. These sections also include other reported gems that the Mexican audience are eager to watch, such as Spring, the Kiwi vampire film What We Do in the Shadows, and the Nic Cave doc 20,000 Days on Earth.

You can check the full announcement of the four new sections here:

World Highlights selection of the films we consider the pearls of this year's festival circuit. It is an opportunity to present to our audience the work of filmmakers whose talents have an indelible influence on the global film industry.

The films in this program are:

In the 90s, Paul takes his first steps into the exciting night scene of Paris. Sharing a passion for music, he and his best friend form a dj duo, Cheers, which soon finds its audience and experiences a dizzying, euphoric, dangerous, and ephemeral growth. With a loose narrative spanning two decades, Eden revolves around aspiring dj Paul, as he helps put the so-called "French Touch" on the world dance map.

Found inside a shining stalk of bamboo, a tiny girl grows into an exquisite young lady raised by an old bamboo cutter and his wife. From the countryside to the big city, she enthralls all who encounter her, including five noble suitors, whom she puts to test by asking for a gift worthy of her.

In a frosty Norwegian town, Nils, an introverted man who works sweeping snow away from roads, receives an award for being the "Citizen of the Year" but little later he finds out his son is dead because of a heroin overdose. Nils refuses this explanation for his son's death and begins an investigation to find out the true reasons. Thus, he discovers a drug-trafficking network made by Serbian and Norwegian citizens, and learns his son simply was in the wrong place. The citizen of the year then becomes an "anonymous vigilante" that makes each of his son's killers disappear, one by one, using the most unusual methods.

Love Is Strange by Ira Sachs (US) - Mexican Premiere

After 39 years together, Ben and George tie the knot in a City Hall wedding in lower Manhattan. On the return from their honeymoon, however, and on account of their vows, Ben gets fired from his longtime job as a choir director for a co-ed Catholic school. Suddenly, the couple finds that they can't afford the rent on their apartment. Only days after they have gathered to celebrate the nuptials, this tight-knit community of family and friends now has to come together again to help figure out how to help their two friends. Sachs' subtle technique for eliciting powerful performances suggest a profoundly affecting result.

Green Perspective is a section that present stories that generate awareness and force us to reflect on our responsibilities with the environment and the urgent need to create a harmonious coexistence among all the links part of this planet. The films in this new section are:

When the director and the producer of this documentary heard that, on a global level, 40% of food was wasted, they simply could not visualize what this number entailed. Curious about whether this food was eatable or not, they began experimenting on themselves and decided to stop buying food at the supermarket in order to survive six months exclusively on wasted food.

With astonishing images shot in the open sea of Baja California, the Pelagic Life multidisciplinary team follows a school of tuna and comes across a small shark-fishing operation run by locals as a modus vivendi they have practiced for generations, and for which they receive a laughable compensation. Delving into the issues related to indiscriminate shark fishing, Pelagic Life tries to implement strategies to promote the respect and conservation of sea life through sustainable ecotourism options for fishers. At the end of the day, sharks are worth more alive than dead.

There are two places, at two different edges of our planet, interconnected despite being thousands of miles apart; Thule, in Greenland, with record ice melts, and Tuvalu, a set of islands on the Eastern Pacific Ocean, on the verge of sinking as a direct result of rising sea levels caused, partially, by ice melts. While for us global warming occurs solely in the media, it is actually changing the entire socio-economic and political reality for the inhabitants of these two places. Due to man-caused natural phenomena, these communities are forced to abandon their traditional ways of life and move towards an unknown future.

The Festival also launches, B Side, a space to showcase the best film proposals portraying music, providing both sonorous and visual enjoyment. The three films presented this year are:

The film weaves two parallel narrative threads. The first is a cinematic portrait of Nick Cave's 20,000th day, created through a series of staged, but not scripted, scenes and encounters. The second looks in depth at his creativity --from writing through recording and rehearsal to performance. Cave is well-known to fans as a musician, lyricist and also more recently as a prose writer, but he is no stranger to cinema either. His last outing in the Panorama section of the Berlin Festival was in 2006, as screenwriter of John Hillcoat's anti-Western The Proposition.

For Those About To Rock: The Story of Rodrigo y Gabriela by Alejandro Franco Fernández (Mexico) - Latin American Premiere

For Those About To Rock is the incredible and inspiring story of two Young Mexican guitar players, Rodrigo Sánchez and Gabriela Quintero, who decided to pursue their dream to live off their music. They started with a metal band in Mexico City, but the national music scene of the time disheartened them, so they decided to try their luck in Europe. From the streets of Dublin to the stages of the most important festivals and venues nowadays, this documentary tells the unbelievable career of these two musicians who are famous internationally but almost unheard of in their own home.

Eve is a troubled young girl who also has a talent for singing and songwriting, which in the darkest of times, becomes her way forward. Music leads her to Glasgow where she meets James and Cassie, each at crossroads of their own. Together they dive into the city's music scene as their lives and lyrics intertwine.

We present provocative films visiting the conjunctions between horror, science fiction and black comedy. A selection that explores the spectrum of contemporary conceptions of genre cinema.

A theater company rehearses the staging of a kabuki play, Yotsuya Kaidan, an old Japanese tale about murder, treason, and a furious revenge from the hereafter. The two main characters, lovers both off the stage and in the play, will see reality coming apart at its seams while notions about their own lives begin to mix with those of the characters they play. As the rehearsals goes on, the fate of the characters in the play will begin to match the fate of the actors, leading to a hideous and perverse ending.

Evan's world begins to crumble after his mother dies; trying to find a way out, he escapes from the United States and travels to Italy without any preconceived plans. Moved by the attraction he feels for a girl he runs into, Evan begins living at a beautiful village on the Mediterranean coast. There, he begins a romantic affair with the girl, never imagining the dark secret she hides and the centuries of horror she carries in her.

What We Do in the Shadows by Taika Waititi and Jemaine Clement (New Zeeland, US) - Latin American Premiere

Using the fake-documentary format, What We Do in the Shadows is a comedy showing three roommates, Viago, Deacon, and Vladislav, who share the usual problems of modern life --paying the rent, doing household tasks, trying to get into night clubs; among many other things, they are also immortal and feed on human blood. When Petyr, an 8,000-year-old vampire, turns Nick, a kid in his twenties, the rest of the group has to show the new vampire the rules and ways of immortals. Meanwhile, they will also be forced to deal with the internet, fashion, social relations, and other monstrosities of modernity.

More about In Order of Disappearance