Review: THE TALE OF THE PRINCESS KAGUYA, Delightful For Children And Adults Alike 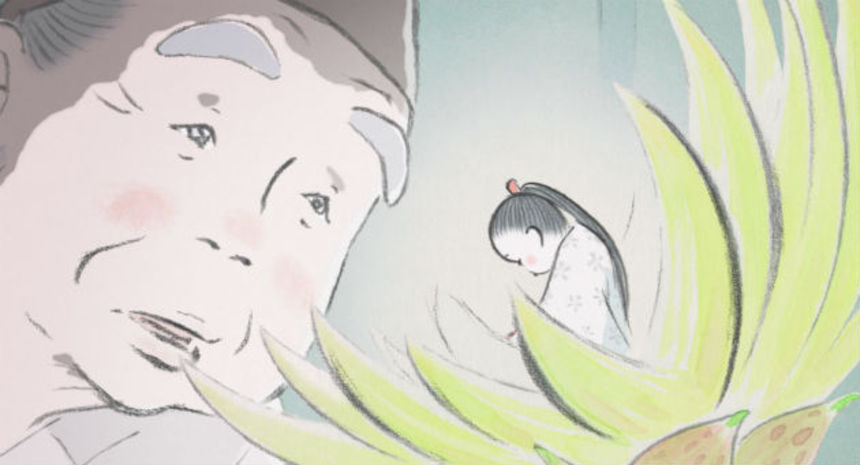 Director Takahata Isao's The Tale of the Princess Kaguya is a 10th century Japanese folk story which, despite some minor changes and an added love interest, is followed faithfully here.

An old bamboo cutter, Okina is walking in the woods when he comes across a shoot of bamboo that springs from the ground. Within the shoot is a tiny girl whom he takes home to his wife. Recognizing the girl as a gift from the gods, the childless couple agree to raise her as their own, at which point she morphs into a real baby, to the shock of the old man. The old woman, Ouna, takes this metamorphosis in her stride. She's also fairly relaxed about the amusing change to her own body that occurs when the question of how she will feed the baby arises.

The girl learns and grows faster than the other children but she is happy with her parents and friends in the forest. When the old man finds great riches and clothes fit for a princess hidden magically within bamboo, their lives change drastically. The family is uprooted to a great house in the city, where the now very beautiful young woman is dubbed Princess Kaguya and must learn to behave like a lady and eventually find a husband.

The most immediate and striking element here is the beautiful animation, which works wonderfully to evoke the idea of a fairy tale, having the appearance of an ancient Japanese emakimono, a picture scroll used for telling stories. In relation to the studio's other films, the watercolor tones are most similar to Takahata's previous work My Neighbors the Yamadas, although the film's style is completely different from that modern family comedy.

While shots of people in the fields or in the background of the city are accurate and lifelike, simulating the working culture of the time, the main characters are brilliantly realized, some being highly stylized caricatures, some more realistic, all unique. The opening scenes with Kaguya as a baby capture so wonderfully a child's early movements, her adopted parents are all warmth and smiles, her teacher is prim and proper, the suitors are arrogant and flawed and Kaguya's handmaiden, despite her face being drawn with about three brush strokes, is hilarious. 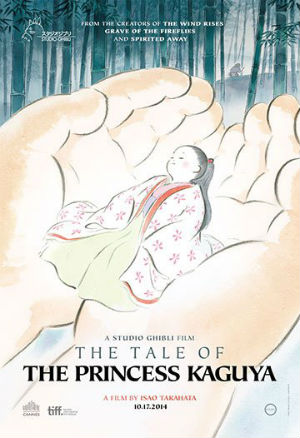 On the whole it's breathtaking but further flashes of brilliance make it transcendent, including a stunning scene when the young princess flees from her home into the woods causing the delicate lines to turn a deeper black and solid shapes to fall away into a speeding blur of swirling color, capturing the fear and confusion of the moment.

Studio Ghibli has created characters time and again which, while heroic and fantastical, are always recognizably human, particularly its young female protagonists, and this film is no exception. It's the warmth of the characters that really make the film so touching. The old couple are adorable, and it's moving to watch the child learn and grow, so perfectly rendered in the delicate animation.

The film is not without humor, found in the country girl's stubbornness in learning how to behave like a princess, and in the ridiculousness of the rules and people in her new court life. Kaguya is a protagonist at once human and otherworldly and it's easy to relate to her fear of marriage and pining for the forest home we watched her grow up in. By the time the film heads towards its finale, the themes of growth and loss lead to an emotional climax.

The general consensus in Japan is that The Wind Rises was popular with adults but bored children, while this film has a much broader appeal. Takahata has always been second to Miyazaki Hayao as the face of the studio but it's not that his films are any less brilliant; his characters, with the exception of those in Pom Poko, are just a little less cuddly.

The Tale of the Princess Kaguya should delight children and adults alike, in a way that Takahata's previous works have not. It will be hard to displace Grave of the Fireflies as Takahata's masterpiece for the sheer gravity of that film, but this comes close with its elegant beauty and evocative retelling of a timeless tale.

Review originally published in slightly different form during the film's theatrical release in Japan in November 2013. It opens in select theaters in the U.S. on Friday, October 17. Visit the official U.S. site for more information.

The Tale of the Princess Kaguya