Toronto 2014 Review: Miike's OVER YOUR DEAD BODY Fuses Both Sides Of The Maverick Director Into A Stunning Whole 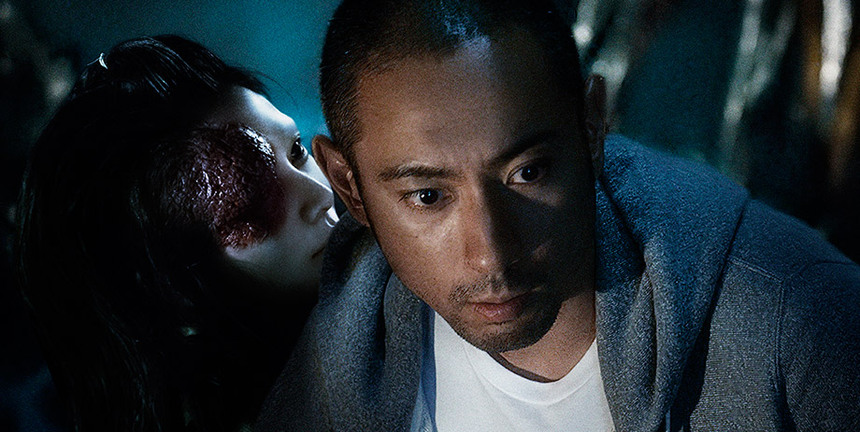 Through his early years Japanese cult auteur Miike Takashi built himself a very well earned reputation as a sort of patron saint of the id, the feverish imaginings of his subconscious spilling out in wild and unpredictable gusts of blood, violence, and just plain bizarre imagery across the screen. His pace of work was frenetic and the results often unruly and undisciplined with a high degree of waste but when things clicked they really clicked and a cult icon was born. In more recent years we've seen another side of the director, films such as 13 Assassins and Hara-Kiri showcasing a director developing a deft touch with complex characters while elevating the technical craft of his work to entirely new levels.

The result has been something of a split amongst fans of his work. There are those who wish the old, anarchic Miike would make a return while others are more than happy to see him grow into something more mature. But there's no need to have that discussion with Miike's latest because Over Your Dead Body fuses both sides of the director into an immensely satisfying whole in a way none of his previous work has even attempted.

Ichikawa Ebizo (leading man of Miike's Hara Kiri) and Shibasaki Ko (Battle Royale, 47 Ronin) anchor the cast as Kosuke and Miyuki, a pair of actors - lovers both on stage and off - in preparation for a massive live stage production of classic ghost tale Yotsuya Kaidan. The play is a sordid affair, a tale of betrayal and lust and murder and vengeance and as the cast make their way through rehearsals it becomes increasingly clear that these are more than just characters, that the events of the play are being reflected in the actual lives of the players as well, that perhaps the actors are a little too similar to the characters they are playing.

And so things unfold into a sort of heightened reality - one which is not necessarily the play or real life but both and neither at the same time - with both actors and characters descending into their sordid assortment of lusts and obsessions with the whole thing escalating into its inevitably bloody, and yet still quite shocking, conclusion.

What Miike has accomplished here is a technical marvel, executing a rich and complex script in a way that feels perfectly natural as he guides his players from a starting point of cool emotional detachment with every hair in place and feelings bound firmly out of sight beneath the surface until the cracks begin to appear on the surface veneer and things give way to raw impulse. Production values are simply fabulous - the stage design for the theatrical production of the play is so gorgeous that I sincerely hope someone actually made use of it to mount a proper production, it'd be a tragic waste otherwise - with Miike delivering one of his most formally composed works to date with that formal structure throwing the bursts of extreme imagery into sharper contrast.

And, yes, when the imagery comes it is as shocking as anything Miike has ever delivered and all the more uncomfortable because - unlike sequences in his early work which often played as sorts of fever dreams or raw, almost adolescent impulse - the most extreme elements here are so firmly rooted in the very real and very recognizable emotional realities of the characters.

Over Your Dead Body is very much a slow burn sort of film, with the emotional coldness of the leads making them somewhat slippery to grasp and empathize with in the early going, and you cannot help but wonder if there is some larger cultural context being missed to some degree by not having significant knowledge of the play which is so famous in Japan and forms such an integral part of the plot and structure. Can someone unfamiliar with Hamlet enjoy Rosencrantz And Guildenstern Are Dead, for example? Absolutely, but they'd find more layers to it if they also knew Shakespeare's work as well and as enjoyable as Over Your Dead Body is coming in cold it's hard not to imagine there's some element of the same at play here. But, that said, once the slow burn takes hold it burns hot for one of the most intriguing, surprising and satisfying films of Miike's long and unpredictable career. Very much recommended.

Over Your Dead Body