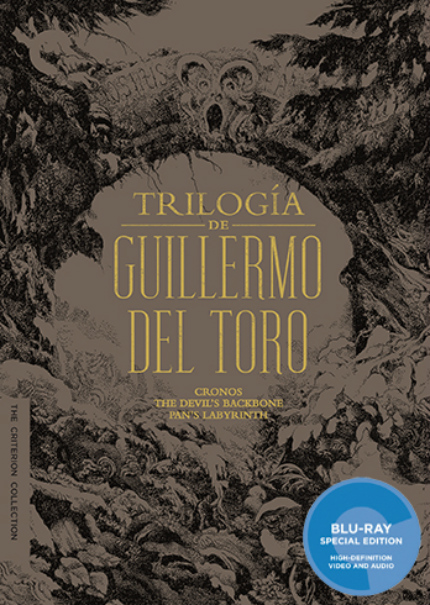 Debuting ten years ago, Pan's Labyrinth remains a gorgeous, haunting masterpiece, the best film Guillermo del Toro has directed so far. In October, it will be added to the Criterion Collection with a newly graded 2K digital master and new supplemental features; it should look spectacular.

The film will also be packaged together with two other directorial efforts by del Toro that have previously been released individually by Criterion, Cronos and The Devil's Backbone. The package is titled Trilogia de Guillermo del Toro and includes various new extras; the Blu-ray edition includes a 100-page hardcover book, featuring new essays, production notes and sketches.

Two European classics are also heading for release in October. Ermanno Olmi's The Tree of Wooden Clogs (1978) won the Palme d'Or at Cannes; it's described as a neorealist look at Italian farm life in the 19th century. Dating from 1963, meanwhile, The Exectioner is described as "a darkly comedic and fiercely subversive political satire by Luis García Berlanga, regarded by filmmaker Pedro Almodóvar as 'the true father of Spanish cinema.'"

Fans of Richard Linklater's Boyhood will be able to luxuriate in a wealth of new extras and those who adore Robert Altman can once again sink into Short Cuts, his adaptation of various stories by Raymond Carver.

Here are all the details on the individual discs, as provided via an official statement by Criterion.

An Academy Award-winning dark fable set five years after the end of the Spanish Civil War, Pan's Labyrinth encapsulates the rich visual style and genre-defying craft of Guillermo del Toro (The Devil's Backbone, Cronos). Eleven-year-old Ofelia (Ivana Baquero, in a mature and tender performance) comes face to face with the horrors of fascism when she and her pregnant mother are uprooted to the countryside, where her new stepfather (Sergi López), a sadistic captain in General Franco's army, hunts down Republican guerrillas who refuse to give up the fight. The violent reality in which she lives merges seamlessly with a fantastical interior world when Ofelia meets a faun in a decaying labyrinth and is set on a strange, mythic journey that is at once terrifying and beautiful. In his revisiting of this bloody period in Spanish history, del Toro creates a vivid depiction of the monstrosities of war infiltrating a child's imagination and threatening the innocence of youth.

Throughout a career that encompasses both visually arresting art-house hits and big-budget Hollywood spectacles, director Guillermo del Toro has continually redefined and elevated the horror genre with his deeply personal explorations of myths and monsters. These three Spanish-language films, each a tale of childhood in troubled times, showcase his singular fusion of the fantastic and the real. Drawing inspiration from a rich variety of sources, from Alfred Hitchcock to Francisco de Goya, the gothic-infused stories collected here-populated by vampires, ghosts, and a fairy-tale princess-make evident why del Toro is considered the master cinematic fabulist of our time.

There has never been another movie like Boyhood, from director Richard Linklater (Dazed and Confused). An event film of the utmost modesty, it was shot over the course of twelve years in the director's native Texas and charts the physical and emotional changes experienced by a child named Mason (Ellar Coltrane), his divorced parents (Patricia Arquette, who won an Oscar for her performance, and Ethan Hawke), and his older sister (Lorelei Linklater). Alighting not on milestones but on the small, in-between moments that make up our lives, Linklater fashions a flawlessly acted, often funny portrait that flows effortlessly from one year to the next. Allowing us to watch people age on film with documentary realism while gripping us in a fictional narrative of exquisite everydayness, Boyhood has a power that only the art of cinema could harness.

The work of two great American artists merges in Short Cuts, a kaleidoscopic adaptation of the stories of renowned author Raymond Carver by maverick director Robert Altman (McCabe & Mrs. Miller, Nashville). Epic in scale yet meticulously observed, the film interweaves the stories of twenty-two characters as they struggle to find solace and meaning in contemporary Los Angeles. The extraordinary ensemble cast includes Tim Robbins (The Player), Julianne Moore (Far from Heaven), Robert Downey Jr. (Chaplin), Jack Lemmon (Some Like It Hot), and Jennifer Jason Leigh (Margot at the Wedding)-all giving fearless performances in what is one of Altman's most compassionate creations.

This masterpiece of black humor, beloved in Spain but too little seen elsewhere, threads a scathing critique of Franco-era values through a macabre farce about an undertaker who marries an executioner's daughter and reluctantly takes over her father's job so the family can keep their government-allotted apartment. As caustic today as it was in 1963, this early collaboration between Luis García Berlanga (Welcome, Mr. Marshall!; Plácido) and his longtime screenwriter Rafael Azcona (El pisito, Belle Époque) is an unerring depiction of what Berlanga called "the invisible traps that society sets up for us." A furiously funny personal attack on capital punishment, The Executioner escaped the state censors who sought to suppress it, and today is regarded as one of the greatest Spanish films of all time.

THE TREE OF WOODEN CLOGS

A painterly and sensual immersion in late nineteenth-century Italian farm life, Ermanno Olmi's The Tree of Wooden Clogs lovingly focuses on four families working for one landowner on an isolated estate in the province of Bergamo. Filming on an abandoned farm for four months, Olmi adapted neorealist techniques to tell his story, enlisting local people to live as their own ancestors had, speaking in their native dialect on locations with which they were intimately familiar. Through the cycle of seasons, of back-breaking labor, love and marriage, birth and death, faith and superstition, Olmi naturalistically evokes an existence very close to nature, one that celebrates its beauty, humor, and simplicity but also acknowledges the feudal cruelty that governs it. Winner of the Palme d'Or at Cannes in 1978, The Tree of Wooden Clogs is at once intimate in scale and epic in scope-a towering, heart-stirring work of humanist filmmaking.

SPECIAL EDITION FEATURES
New 4K restoration, created in collaboration with The Film Foundation at L'Immagine Ritrovata and supervised by director Ermanno Olmi, with uncompressed monaural soundtrack on the Blu-ray
Alternate Italian-language soundtrack
Ermanno Olmi: The Roots of the Tree, an hour-long episode of The South Bank Show from 1981, featuring an interview with Olmi on the film and a visit to the farm where it was shot
New program featuring cast and crew discussing the film at the Cinema Ritrovato film festival in Bologna, Italy, in 2016
Archival interviews with Olmi
Trailer
New English subtitle translation
PLUS: An essay by film critic Deborah Young

More about The Devil's Backbone